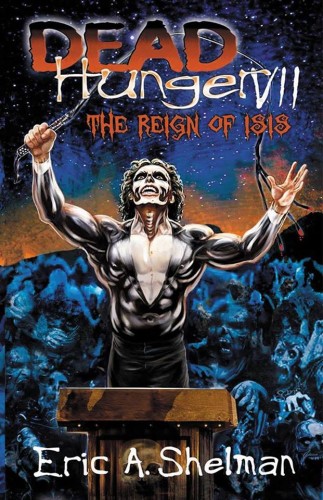 Set twelve years into the future The Reign of Isis finds our harrowing group of heroes set up civilization in the small town of Kingman, Kansas. All in all life is pretty good for the likes of Flex, Gem, their son Flex Jr., Hemp, Charlie, their son Max and all the other characters we’ve come to know and love in the previous Dead Hunger volumes. Yet something restless lies within the Hybrids Isis and Max. With age their abilities have developed to eerie proportions.

One of their many attributes is to call out to the Hungerers, or zombies if you prefer and flock them like sheep to the slaughter. In the year 2027 it’s kill or be killed and has been that way for many years. Just when the Hybrid youths seemingly have everything under control, they sense a massive horde just northwest of where they reside. Despite numerous protests from family, friends and allies Max and Isis set out to determine exactly why their beckoning telekinetic siren calls are no longer effective. Along their journey they encounter a diabolical presence known simply as Maestro. His sinister intentions have an unworldly impact on those who flock around him. Will his blackened heart be enough to conquer Kingman as we know it or will our heroes and hybrids rise above all adversity in The Reign of Isis?

Dead Hunger VII begins in a riveting first person persona in the forward from Isis Gammon’s point of view. The allure is instantly ignited unto the readership and we thrive to unveil what’s become of our loveable protagonists since The Gathering Storm. The tone of the story then reverts back to third person narrative. It’s a refreshing change of pace for avid Dead Hunger readers who have been accustomed to the majority of the chronicle like volumes versed in first person perceptive. We get a glimpse of what’s going on with everyone and the conjecture is removed from the active action. One may suspect that the emotional elements are void in this style. Rest assured author Eric Shelman illustrates a roller coaster ride of emotions that refuses to relent until the final pages.

Those with previous or little exposure to the previous six volumes are treated to a concise, thorough yet brief account of what has transpired up to this point. We’re brought up to speed and given a refresher for minor details we may have forgotten.

The use of Isis and Max as our lead characters and their abilities as they continue to unfold is highly imaginative and highly addictive reading. For a while I had thought I had a subconscious bias in favour of these tales, devouring each in two to three sittings. The more fans I interact with and meet, the more I realize they too can rarely put down these tales once the reading adventure begins. Each volume is more polished than the last so much so that Shelman makes the story writing process look easy. His style is charismatic and engaging while the escalating plot never ceases to amaze.

Meticulous details to the little things we may take for granted reinforce the continuity or believability of the plot. Certain elements the majority of us may take for granted, but things like cigarette rations being incredibly stale or lighter fluid evaporating in many cases further accentuates the fact that yes our characters are in a post-apocalyptic society and continue to cope under dismal conditions.

Without divulging any plot spoilers I can say that the reading audience is treated to some very compelling, innovative conflict escalation where demented ring leader Maestro is involved. Some mind blowing abilities of the Hybrids are utilized that will keep you wrapped up in the pages for hours.

There’s been a great deal of discussion on social media as of late about what makes a good read. What are the kinds of books that stick with you; resonate long after the fact? The answers are as unique and diverse as the readers and books themselves. I often consider a memorable tale as something I can reflect upon that correlates with a major event within my life. For example, while reading Needful Things by Stephen King, I’d just graduated college. Swan Song, by Robert McCammon, I’d just gotten my first apartment etc. With Eric Shelman, it isn’t so much that we attribute a life event while reading his books as his books create a life event.

We read as an escape, to be swept away with our imagination, our subconscious and retreat to a realm where the possibilities are endless. We’re immortal and impervious to disease, poverty and sorrow. Reading Dead Hunger creates fond memories and discussion pieces long after the final pages are consumed.

It never ceases to amaze me how Eric A. Shelman reinvents the zombie genre one volume at a time. The Reign of Isis is another piece of the insatiably infectious odyssey known as Dead Hunger.