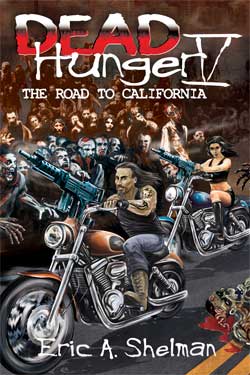 While Zombie Apocalypse survivors Flex, Gem, Hemp and Charlie continue to restore civilization and co-exist in a world gone mad, Dave and Serena become restless and cannot shake the undeniable feeling of venturing off into the open road. As tribute to his late sister Lisa they decide to embark upon a journey to find his Uncle Brett in California. The perilous trip will be far from easy with the zombie threat as unrelenting as ever among countless additional obstacles and adversities. Will Dave and his companions arrive at their destination with the answers and solutions they long for or will their demise devour their hopes and dreams along the Road To California?

Whether you’re an avid die-hard fan of the series or completely foreign to the Dead Hunger volumes, this particular tale is a bona-fide thrill ride into adventure, bone chilling suspense. Dave’s wise cracking, swash buckling character demonstrates he can carry a most entertaining and adrenaline fuel ride on his own. There’s a little something for everyone within the Road To California.

We venture further into the exposition of Serena, Nathan and of course Dave suspending the empathetic factor in a world coming completely undone. Their collective traits will relate and translate unto a universal audience enhancing our innate sense of unity. While the premise appears to be something inconceivable our subconscious cannot deny that there is something very real and endearing within these pages.

New characters are introduced in the form of Rachel, Don, Lola, Uncle Brett among others. Their segue provides curiosity and intrigue. In no time flat we realize there is a common bond prevalent in society that has virtually crumbled in every other fashion. Psychologically we adapt a sense of optimism as we peel back the layers of their adaptive qualities and what makes them strong enough to survive overcoming all adversity along the way.

Some exposition into Dave’s beginning will draw upon the heart strings of many once again reinforcing this adventure more realistic than one can image. His sense of sentiment, self-doubt and reservations enhances his character. In many ways Road To California is a coming of age tale many of us would feel one and the same as his central support system is indicative of depth and dignity.

The journey within itself from South Carolina to California is fascinating, a virtual road map of freak show road side attractions unhampered with defeat and despair. Their collective impromptu method of travel is riveting and will render you on the edge of your seat in page tearing frenzy.

Fans reliant upon the terror and gore formulas will not be disappointed. Shelman unleashes an onslaught of death and destruction. Be forewarned the faint of hear, certain pages will make you squirm and ponder purchasing a night light just for surrogate security.

The subtext or theme of telekinesis as explored in volume four: Evolution is showcased further. As the pregnant zombies engage in sinister mind control the readership cannot deny the innovation, ingenuity and originality adapted into creating this volume.

The climax unfolds with spell binding enchantment as we’re introduced to a new character Isis that beckons the question is this the end of Dead Hunger or merely the beginning?