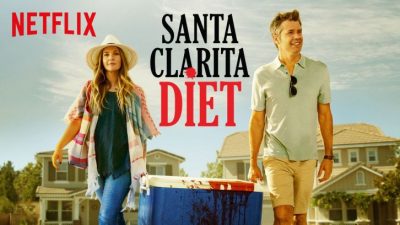 Uptight suburban mom and realtor Sheila Hammond faces a series of unique life challenges when she somehow contracts a zombie virus yet strives to keep her family and lifestyle as “normal” as possible.

Generally, I am not a big fan of horror comedy. As a horror junkie who thrives on all things creepy and gruesome I prefer my horror to be genuinely terrifying and at least a touch paranormal. None the less I occasionally stop and think “well this is all getting a bit dark and heavy”, and I look for something lighter to cleanse the palette. “Santa Clarita Diet” worked really well for that.

Season 1 (released Februrary, 2017) is currently available for streaming on Netflix. I fully admit to watching the entire first season in one sitting, it’s an easy watch.

The story starts by introducing us to the Hammonds – Sheila (Drew Barrymore) and Joel (Timothy Olyphant) – and their teen daughter Abby (Liv Hewson) inside a sunshiney suburban world of Southern California. Plagued by standard First World problems such as not being able to afford that Range Rover and having a perpetually angry boss (Andy Richter), the Hammonds tend to be uptight, overly passive and a little dull. They struggle with fairly ordinary issues like trying to keep their relationship strong while surrounded by their neighbor’s disastrously cartoonish marriages, Joel’s love of casually getting high at every chance and trying to be the best possible parents (usually failing miserably) to their misunderstood teenager. The first few minutes of the first episode are a little rough as the premise is shoved in your face no holds barred. The acting is way over the top and painfully silly, later this plays well in the series but it’s a bit of an eye-roller at first. The humor in the first episode or two is predictable and stale at best, and juvenile at worst. But by the middle of the second episode, I found myself actually laughing out loud on a regular basis and the whole thing freshened up and became very entertaining. 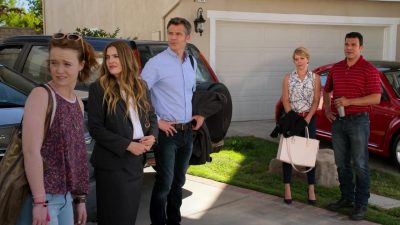 Luckily we are not made to wait long before the fun of cannibalistic gore kicks in. During a particularly stressful workday, Sheila comes down with a rather horrifically vomitous illness that includes some bizarre symptoms. With the help of the typical awkward geek/super genius teen neighbor Eric (Skyler Gisondo), the Hammonds accept fairly quickly that Sheila’s illness is some form of zombism. Being undead opens a new world of energy and focus to Sheila as she traverses the lack of impulse control, unbridled zest for “life” and raging libido that apparently comes with zombiehood. Meanwhile, Joel just wants to find a cure and keep life as normal as possible, at least in appearance. A new set of problems arise when Sheila unexpectedly kills and eats a large portion of the smarmy, rapey Gary (Nathan Fillion) from the office. After this Sheila realizes that she can only eat human meat, seriously stretching the abilities of the family’s desire to be as normal and ordinary as possible. 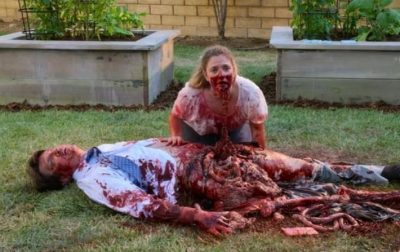 A lot of what makes the story clever and entertaining is that the main characters continue to work through the same ordinary problems that all of us face such as marriage, work, parenting issues, keeping up appearances, midlife crisis, friendships and the choices of adulthood/teenhood while simultaneously murdering people for consumption. There is quite a lot of character development for what seems like a silly, slapstick horror comedy. In fact, the reason you will stay and watch to the end is purely because of the characters and how they progress through the story. Somehow Drew Barrymore has become more beautiful and fun to watch on screen as she has aged, I may have stuck through the whole first season just to watch her fun portrayal of Sheila. Timothy Olyphant does a great job of taking the hesitant, passive Joel through a range of outrageous life experiences and incorporating those into the character as he navigates through this new version of life. The two main teenage characters are well played and end up being incredibly likable even if a lot of their roles are playing stereotypical fictionalized teens. 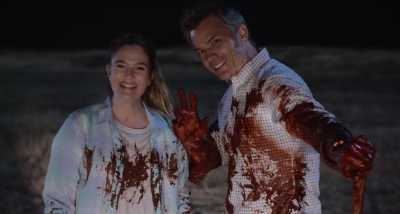 The story itself leaves a bit to be desired, that definitely was not the reason I stuck around for the whole season. Despite one of Joel’s driving forces being the quest to find a cure for Sheila’s ailment, you don’t really care if he ever finds one or not. There is no mystery or intrigue keeping you up blurry eyed through the night to get to the next episode. The light-hearted commentary on the nature of modern gentrified lifestyles, however, as well as the creative gore and the endearing, evolving and often deteriorating cast of characters will be enough to keep you interested through all 10 episodes. It’s a fun show, it’s a good break from relentless dark horror and worth a watch even it’s just for some dark laughs.

Season 2 of “Santa Clarita Diet” premieres on Netflix March 23rd, where we have left Sheila chained up in the basement and the teens working on a possible serum to help with her worsening condition. I plan on another all night binge of the new season, looking forward to revisiting the Hammonds and their little zombie problem once again. 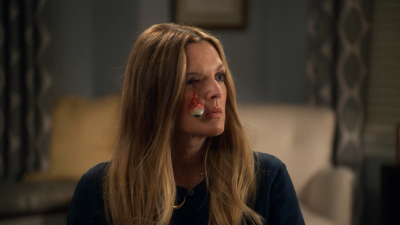