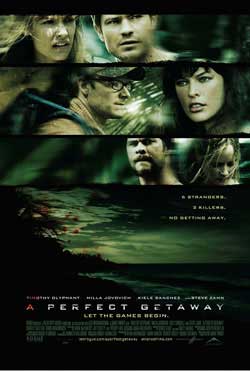 Newlyweds Cliff (Steve Zahn) and Cydney (Milla Jovovich) are enjoying a perfect honeymoon in Hawaii — until they run into a pair of menacing hikers, Nick (Timothy Olyphant) and Gina (Kiele Sanchez). As it turns out, the two are dangerous killers who begin stalking the not-so-happy couple. David Twohy wrote and directed this action-packed thriller, which co-stars Marley Shelton, Katie Chonacas and Chris Hemsworth.

QUICK FIX:
Newlyweds Cliff and Cydney head off to Hawaii for their honeymoon and while on a helicopter tour decide to hike a 12 mile trail to a remote yet absolutely gorgeous beach that they see from the air. After ditching a suspicious hitchhiking couple along the way, and hooking up with another couple on their hike, our newlyweds hear news of another honeymoon couple that was brutally murdered on one of the other islands and that of course the authorities believe that the killers have relocated to the very island they are now on, and possibly the very same hiking trail. As more couples are entered into the equation, red herrings are introduced faster than you can say “And I would have gotten away with it if it weren’t for you meddling kids!!” Far away from the protection of McGarrett and his squad of Five-O or the secure shadow of Thomas Magnum’s mustache, tensions rise faster than the tide as our intrepid honeymooners no longer know who to trust. Trouble in paradise, indeed…

RAMBLINGS:
Well, thanks a lot David Twohy….you just f*cked up my ideal paradise spot. See, I’ve been all over this great nation of ours, but Hawaii is one of those spots that I held in my head as an elite, special occasion place that I’ve never been to but was soooo looking forward to treating myself and the family to over Christmas 2010 as not only a well-deserved (more for them for putting up with me all these years) vacation for the whole family, but also to treat myself for making it to age 40 next year while (hopefully) still having at least three remaining functional brain cells. Being a horror movie geek, I can easily drive through forests and mountain areas with no fear of three-fingered cannibalistic inbreeders wanting to make sushi out of me, or through dry desert land with not even a 2nd thought given to hungry mutants living in the sand waiting to blow out my tires with a well placed trap and burn me alive for dinner. But there’s just something about the calm, beautiful shores of Hawaii crossed with the plot of a pair of unknown honeymooner butcherers that makes me rethink that idea and makes me wonder if maybe we shouldn’t just go to Disneyland again instead.

That is, of course, a very well-intended compliment to the writing ability of Mr. Twohy…to make the hardened fan like myself shiver when I think of the real world possibilities of cold blooded killers in paradise. And without hopefully giving too much away, the dialogue he wrote is completely riddled with double meanings and things that once the movie is over make you smack your head and say, “OH SHIT…that was a dead giveaway!! Or was it…?” See, that’s the beauty of this movie – you think you know, but then you don’t know because something was said or done to make you think twice about who you really think the killer or killers is/are, and just when you think you have it all figured out, BAM…you land on a Whammy, lose your money, and you’re wrong again.

And to keep an audience, or at least a dude like me who normally has the attention span of an eight-year old jacked up on Mountain Dew, engrossed in nothing but “getting to know you” storyline and character development for a full f*cking hour before ANY real action happens is just another testament to the man’s talent. It should come as no real surprise to anyone though…after all, this is the dude that not only wrote and directed the awesomeness of PITCH BLACK and BELOW, but also wrote WARLOCK, one of my all-time underrated 80s favorites.

The acting was nothing short of outstanding, especially from leads Zahn (who never disappoints me), Jovovich (yummy), and Olyphant. And let’s face it – great dialogue can easily turn to sh*t in the mouths of the wrong actors, but such was not the case this time out – they took it, ran with it, and played it convincingly enough to keep me guessing all the way to the end.

LAST WORDS:
I’ll be honest – this is no gorehound’s paradise. It’s more thriller/whodunit than straight-up horror flick and takes it’s sweetassed time setting things up for you, although at approximately the 60 minute mark all bloody f*cking hell breaks loose and doesn’t let up till nearly the last frame. But it was engaging enough to keep my ADD-riddled ass glued to the screen for the entire running time without ever getting bored or distracted by shiny things, so I highly recommend it, and I think you’ll dig it.