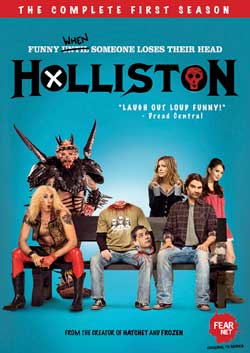 Two down and out aspiring filmmakers struggle with life, career, and the opposite sex as they attempt to make it out of the small New England town they are trapped in and into the big time.

So what do you get when you cross a hilarious sitcom with 2 best friends, a underlying horror theme and a couple of bizarre rockers added to the mix? Yep, you guessed it “Holliston”

With season 1 behind them and 6 episodes, Holliston is such an odd mix that you may just end up loving it. Our 2 roommates run a horror TV show where they talk about genre subjects, review films, and interview guests. Kind of like “this site” but in front of a camera. The 2 best friends are “Adam” (Adam Green) and Joe (Joe Lynch), 2 aspiring filmmakers, who live in a typical bachelor styled apartment littered with horror memorabilia. Though that’s not the twist. Their TV station boss is none other than Dee Snider playing Lance Rockett, a over aged transvestite-looking 80’s-rocker who fronts the Van Halen cover band…”Diver Down”. Now of course Lance is dolled up in his trademark “Twisted Sister” garb, but for the series, he is jut an odd peg in a square hole. Lance is limited to “usually” 1 appearance per episode but brings a certain 80s metal humor that many of us surely get if even as an “inside” joke of an era long lost. Joe and Adam often make jokes and pose questions about Lance’s sexuality (classic “SNL Pat” humor that ties in pretty well with the “pretty era” of rock and roll). Thouhg any viewer will acknowledge that Lance’s Twisted Sister makeup is far from pretty……ah the good times. 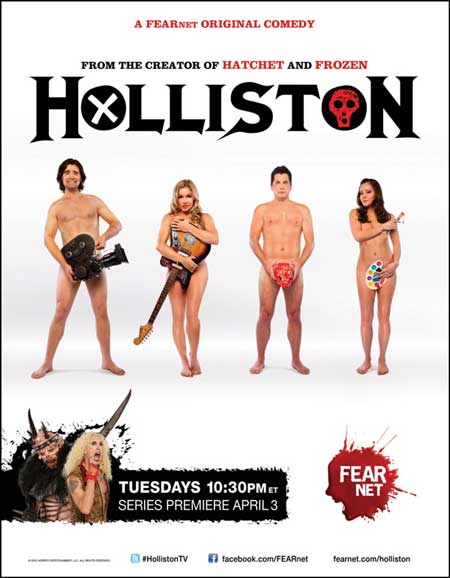 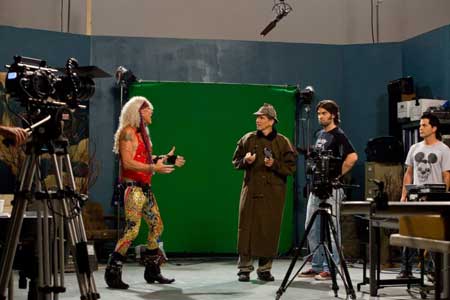 Ok, so if that wasn’t enough, you got Oderus Urungus from Gwar making appearances as a personal guardian angel advisor to Adam. There is something about seeing a monster alien warrior wearing a half shirt and G-string that is just SO wrong on so many levels. But of course it’s also classic cGwar gear which adds a cool factor in the same breath. But fear not, as there IS a purpose to this series. The screen writers have incorporated “that” classic love interest bug into Adam who is trying to win back his ex girlfriend (whom he’s never fallen out of love with). It’s the stuff of sitcoms and in many respects a play book move for keeping an underlying tension going.

The zany cast works quite well together and once ironed out will make for an even better 2nd season. It’s an odd formula that needs to grow and evolve in the same way that the characters have evolved over the course of only 6 episodes. The bonus for us horror fans is of course the “horror. Many episodes contain guest stars from the genre that range all across the map. Derek Mears plays an episode cop, Tony Todd plays a movie celebrity who likes to party way too much with other shows that will pop in a horror icon here or there. 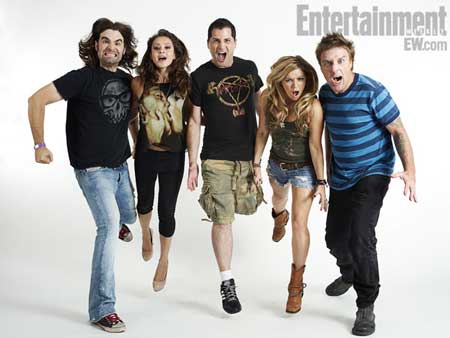 For me, I just found Dee Snider to be so “over the top” that his character simply works in the playing field he’s been given. Actors Adam Green and Joe Lynch obviously have a great rapport on screen that screams nerdom that only us horror bloggers can really understand. And of course there are the 2 girls Corri (Corri English) and Laura (Laura Ortiz) who bring a bit of quirky, sexy, and funny with frequent doses. Episodes center around the roommates who are trying to make their first horror film. Between their day job gig of creating cheesy commercials for a local cable access station and trying to deal with relationships, being skunked and trying to get their first trailer shot…well it’s quite an entertaining ride. The series debuted on the TV channel FEARnet toted as a first original series for the company. 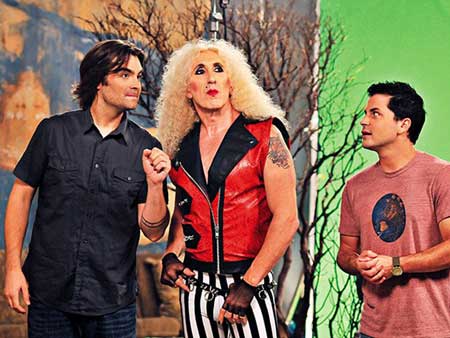 “Holliston” is a great series that grows on you over time. Adam Green you already know from his directing past with films such as “Frozen”, “Chillerama” and the “Hatchet” movies. Joe Lynch also a director on “Chillerama” you might know from his directing on “Wrong Turn 2” and “Knights of Badassdom”. Corri English has done quote a few acting gigs for the horror realm as well as her co-star Laura Ortiz. So in short your in good company all around. The combination of horror and comedy sure looks different when coming out of the town of Holliston, but its all in good fun. I for one, can’t wait to see what they come up with for season 2!