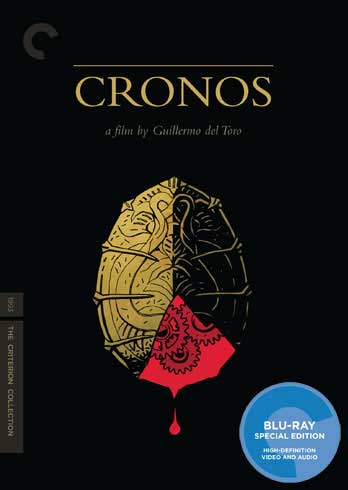 The long talked about Criterion Collection edition of Guillermo del Toro’s Cronos is coming to DVD and Blu-Ray on December 7. Featuring cover art by Mike Mignola, this presentation harbors a bevy of extras. art. Synopsis: “In 1536, fleeing from the Inquisition, the alchemist Humberto Oganelli disembarked in Veracruz, Mexico. Appointed official watchmaker to the viceroy, Oganelli was determined to perfect an invention which would provide him with the key to eternal life.

He was to name it the Cronos device. Four hundred years later, one night in 1937, part of a wall in a building collapsed. Amongst the victims was a man of strange skin, the color of marble in moonlight, his chest mortally pierced. His last words: Sua tempore.

This was the alchemist. The authorities located the residence of the dead man. What they found there was never fully revealed to the public. After a brief investigation, the mansion and its contents were sold at public auction. Never on any list or inventory was the Cronos device mentioned. As far as anyone knew, it never existed.”