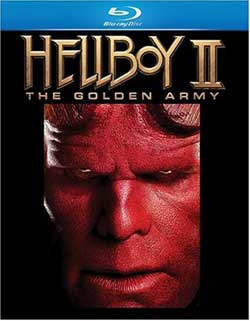 In this continuation to the adventure of the demon superhero, an evil elf breaks an ancient pact between humans and creatures, as he declares war against humanity. He is on a mission to release The Golden Army, a deadly group of fighting machines that can destroy the human race. As Hell on Earth is ready to erupt, Hellboy and his crew set out to defeat the evil prince before The Golden Army can destroy humanity’s existence.

Hellboy (Ron Perlman) is back and ready to take on anything that comes at him. Our red sawed-off-horn-hero Hellboy has returned with the threat of the world’s destruction at his feet. Prince Nuada (Luke Goss) has grown tired of the human race. Because of it he is determined to retrieving the ancient crown that that grants him control over the Golden Army. This Golden army is explained thru a puppet like story book beginning that tells of a former time when the world was at war. A special army was created that was deemed indestructible. But after this army was released, it was apparent that the army be forgotten and dormant due to their highly destructive nature. Fast forward to present and Prince Nuada has decided to take to the surface with his trusty beast of a friend Wink. Wink is a monster that is equipped with a iron hand that is able to extend per a chained attached throwing blow. Prince Nuada on the other hand is prince from a line of white skinned elders. He shows no mercy in taking out anything that stands in his way including his King and father. His twin sister Princess Nuala (Anna Walton) disagrees with the destructive nature of his brother and does all she can to keep him from claiming the 3 pieces that make up the crown needed to control the army.

Now in the meantime, Hellboy is called by his government agency to put out Prince Nuada’s  fires which usually consist of various released monster entities. Hellboy’s team from the first film returns as Liz Sherman (Selma Blair) and Abe Sapien (Doug Jones). Liz, his wife now is able to ignite on command. Abe, our fish eyed intellect possesses the power of insight and reading whoever he touches. Jeffrey Tambor who plays agency leader Tom Manning has done all he can to contain the team and keep them out of public eye. It looks like that luxury has ended.

This 2nd entry into the Hellboy franchise is as hero driven and bad ass an anything else out of the market. If you loved the first, I found this 2nd entry even more satisfying. We get plenty of cool cgi and practical effect creatures along the way almost in a cross between Star Wars and Ghost Busters. However, Hellboy still stands on its own with its own set of rules. There is alot of action this time around with Prince Nuada flipping around like a trained ninja. You can definitely detect the Guillermo del Toro direction which has this sense of fantastical mixed with mythical and Dante-like vision. Most impressive though has to be the Angel of Death who is also played by the multi-talented and nimble Doug Jones. The troll village is very cool and echoes a bit of Harry Potter meets Jim Henson. Johann Krauss is the new character who wears an old diver suit to contain his mist-like ethereal body. I’m not sure he will be a fan favorite, but he does introduce a new kind of character embodiment.

As a feature, the production doesn’t stop moving with one challenge backed up to the next. Anna Walton is hypnotizing as Princess Nuala with Selma Blair who looks as hot as ever. The low budget cgi in the beginning might throw a few people off, but it explained later in some of the extras as to why it was done that way. In any case, there is no need to worry as visually this production is dynamic and full of rich beastly special FX. The movie itself was budgeted  at $72,000,000 which made half of that back opening weekend. Still with its rich cast and high FX, the gross only came in at over 3 million above production cost. I’m hoping that they continue the franchise because I really enjoy the crap out of the Hellboy saga. Though Hollywood is weird that way and looks to make bigger profits. The film has this slight ode to a Dante Inferno kind of placement but is kept subtle. I wouldn’t suggest renting it as you’ll want to purchase it instead. 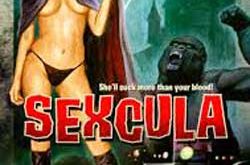