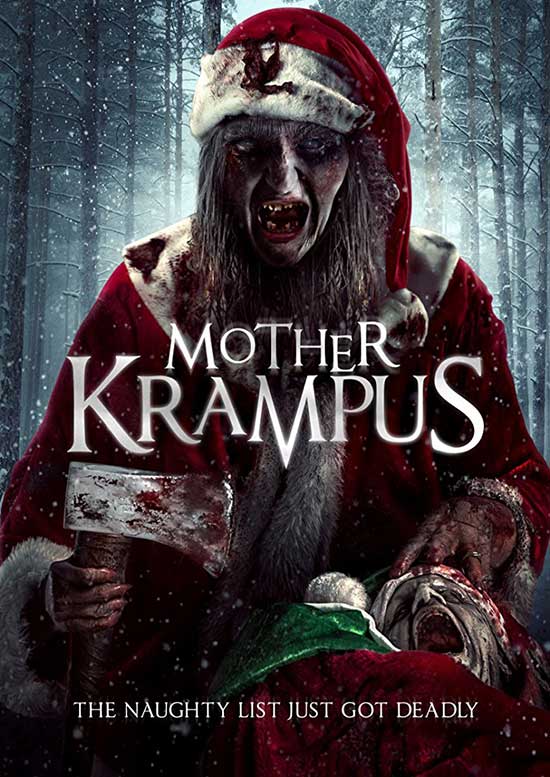 Based on the myth of Frau Perchta, a witch that comes on the 12 days of Christmas taking children each night.

I have never been a huge fan of Christmas, which I may have stated in a previous review, so I greatly enjoy films that throw major monkey wrenches into the works of holiday bliss.

Our next contender for taking the piss out of Christmas is “Mother Krampus”, also known as “12 Deaths of Christmas.” It presumes to relate itself to the European legends of Frau Perchta.  Apparently, she is/was the spirit/being that made sure all the children had done their annual spinning quota and that they did not spin during the holidays. (By “spinning”, I mean “spinning thread” as opposed to the exercise class.)  Perchta most likely had other jobs depending on local legends, but that seems to be the gist of it.

Not a lot of spinning going on these days, except in hipster craft clubs, so we’ll just chuck that part right out for no good reason and with no explanation. You get a lead-in that talks about children who were abducted back in 1920’s Belgrave. Why? To give the events of this movie some credibility, I guess. Or to explain the “legend” so that it can muddle things later.

After the lead-in and a child abduction that is utterly the fault of the parent who could not be bothered to pay attention to their child scooping up candy like James Woods in a “Family Guy” episode, we pretty much hit a wall with the film as we need to set up the human elements. Bad marriage, dad with younger woman, divorce, whining, and a well-meaning child who just wants “mummy and duddy” together again for Christmas all chew up way more time than they should. Yes, you want to sympathize with the characters, but I’m not there to share in their personal lives; I’m there to see the horror.  Sadly, most of the horror comes from realizing that you probably should have picked up something else from Redbox.

It seems that this Perchta is supposed to punish children. You don’t see any of that, though there are a number of scenes that give the old “little Bob’s gonna get a knife through his Toughskins” vibe. Mostly, you see people around the kids getting sliced up like a holiday meat platter. It seems that a child murderer was in business back in the early 90s, so the locals determined it was some older woman who lived on the fringes of the community. Even though she pleads innocence, they off her, but not before the “terrible curse” is placed on everyone involved.

When the new deaths start taking place, there are a few attempts at creativity, like using Christmas lights and electric carving knives, but it is too little and far too late after wading through the ultimately uninteresting family drama playing out through most of the film. It would seem that the “curse” is coming true, and those who killed the old lady are being targeted. Do they circle the wagons and attempt to shield the innocent children? Nope. Everyone is on their own, and don’t bring your trouble to my door. Nice to see that the script captured that element of modern mankind rather well. The characters don’t even care enough to help each other; why should I be expected to care whether they live or die?

About this time, I am tempted to reveal the end of the movie. Oh, stop whining. If you can’t figure out the basic ending to this film by now, you need to watch more B-movies. I mean, other than Freddy Kruger, most individuals strung up by committee in movies are usually innocent, hence the “curse” coming true. So, you get a half-assed mystery tossed in that means little and makes less sense. Then the post-climax scene just leaves the viewer wondering what it meant because you have what seems to be a new character’s voice introduced right at the very end.

To give “Mother Krampus” some positive comments, I have to settle for the fact the film is competently made and most of the performances are decent. Of course, you have to understand that this is a low-budget movie, so you aren’t getting Oscar-caliber work here, whether in front of or behind the camera. That’s fine. It gives me hope that the filmmakers move on to better scripts and bigger budgets so we can see what happens when they are able to work with fewer restraints.

Starting next year, I think my Christmas ban may start including watching new Yuletide horror flicks. They are like a houseful of relatives: A couple you love dearly, a few you like, and the rest you wish you never had to see in the first place.