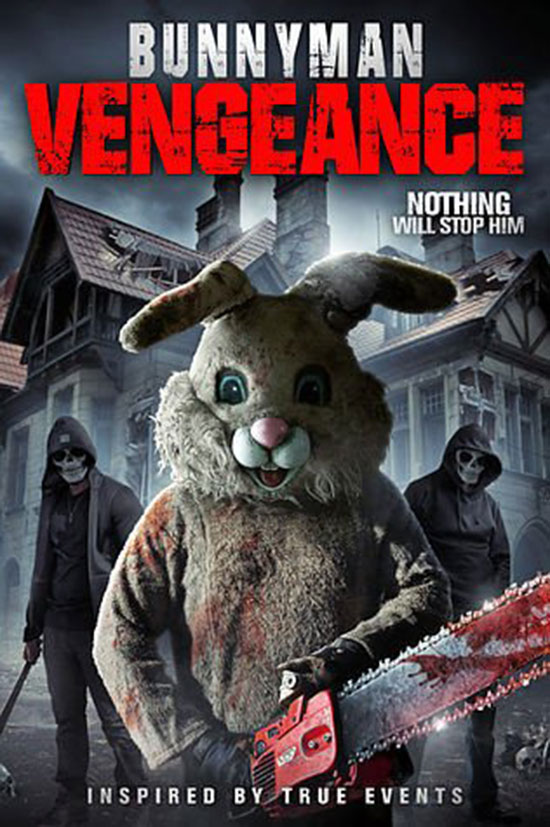 The silent costumed killer known as the Bunnyman returns to his childhood home, and runs afoul of his equally psychotic siblings as they try to run a haunted house attraction.

Bunnyman Vengeance (2017)  is the third, and reportedly final, Bunnyman film. What is Bunnyman, you ask? The Bunnyman, or “Michael,” is a horribly burned killer who does his dirty work in an Easter Bunny costume that’s long ago seen better days. The first two Bunnyman films saw our intrepid killer torment random strangers, but this final entry has Bunnyman returning home to his siblings’ spooky attraction out in the middle of nowhere, California. Rather than re-integrating into their psychotic murderous exploits, he threatens to blow their whole operation, which apparently consists of killing hikers and making a year’s worth of income in one night by running a second-rate haunted house.

Bunnyman Vengeance is a bizarre beast. With one part original insanity, and two parts derivative The Devil’s Reject and Texas Chain Saw (1974) filler, this film fluctuates between heavily entertaining and overlong. The parts that are good—such as the insane music-video-turned-dream-sequence (seriously, watch this film for this 3 minute section, alone)—are visually fascinating and no-holds barred. The filler parts, which consist of dry establishing shots, repetitive vignetted flashback footage, and questionable death scenes, become tiresome early.

Like the entertainment factor, the graphical effects flip flop between great and laughable. The burn makeup on Michael’s younger and adult selves are fantastic, and the superimposed flames are actually quite well done (no horrible ending-flames from the forgotten Halle Berry vehicle Gothika (2003), here). The gore, though—that’s where the trouble arises. The bloody acts and splatter are almost exclusively superimposed CGI affairs, and the constantly swaying handy-cam work leaves the cuts, bludgeon-marks, and gushing wounds moving on and off of the bodies they purportedly belong to. They also weren’t color-corrected effectively, meaning that they appear crisp and vibrant over the dusty and muted palate of the actual video. This latter issue might be intentional, as the slick reds do look striking over the dulled footage, but it’s too far from realistic to be at all effective.

The mute Bunnyman himself is played by director Carl Lindbergh (Bunnyman, The Bunnyman Massacre, Shattered Lives 2009) and indie-producer Joshua Lang (Savage Dog 2017), and the character looks the kills and lumbers effectively. Lindbergh certainly has an eye for visual flair, but I frequently hoped for a more veteran director to help ground his ideas, changing them from merely interesting to exceptional. Still, interesting is good enough for a movie harboring a killer in a rabbit suit, and the rest of the leads commit completely to the strangeness.

Michael Saun Sandy (the upcoming Axeman 2: OverkillI) plays the nastiest character, John, who is Michael’s older brother and family leader. His stern presentation and sociopathic lack of empathy come through well, especially when sharing the scene with Michael. Omari Washington (Assassin’s Game 2015), who plays the middle brother, is less willing to hurt the family, but all-too willing to hurt others. He gives plenty of unsure looks that fit the direction Lindbergh seems to strive for in the character, and looks cool in his clown getup. By far the best performance, however, comes from Pucci Tres, who plays the group’s differently-abled, kind-hearted sibling Jacob.

Overall, Bunnyman Vengeance is an interesting progression from the prior two films, which rely on body count over substance. While BV doesn’t match any philosophical films for heavy material, it does have striking visuals, strong leads, and a level of madness that makes for good viewing. If you’re in for something wonky, give it a watch—if you’re in for something wonky and daring, then watch all three Bunnyman films in a row (you can sleep when you’re dead, right?)