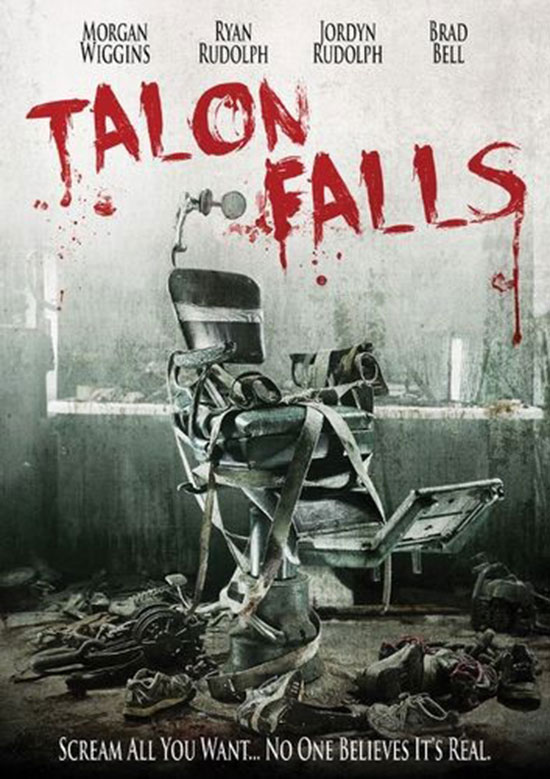 A group of four friends visit a rural Halloween attraction, only to learn that some of the exhibits may be much more interactive than anticipated.

Talon Falls is of the most recent direct-to-video titles to promise torture-themed horror entertainment with an indie flair. While it has solid technical know-how off screen, clever use of pre-designed theme park sets, and nicely crafted masks in abundance, poor acting and the lack of a clever script to go along with the decent plot keep Talon Falls from entering the must watch list. 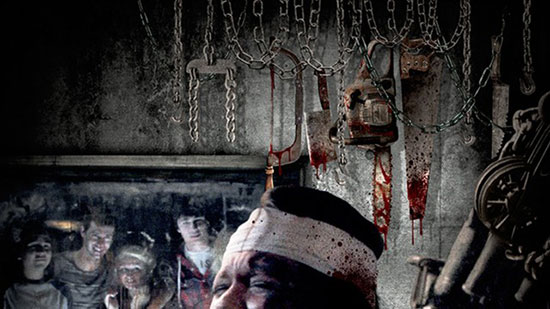 The story follows four generic 20-somethings as they stop at a large road-side attraction called “Talon Falls”, a Knott’s Scary Farm-type setup that is clearly a real location somewhere. While at the attraction, the group grins and grimaces through mazes of what appear to be hapless victims suffering tortures delivered by hulking masked men. Soon they learn that Talon Falls isn’t all fake, and become victims of its predatory games.

The first thing to address with Talon Falls is the acting, or lack thereof. Virtually the entire cast are first-timers, and while I commend writer/director Joshua Shreve (Chasing Ghosts 2014) for giving newcomers chances, it hinders the film noticeably in the beginning and the end. This is exacerbated by the fact that the cinematography and audio quality are quite excellent, providing sharp contrasts to the unprofessional role-playing by the leads. Luckily for most viewers, the genre of torture-porn doesn’t typically require much character building, though exceptions occur for the shining stars in the field (Hostel and Saw II being prime examples of how it can be done). 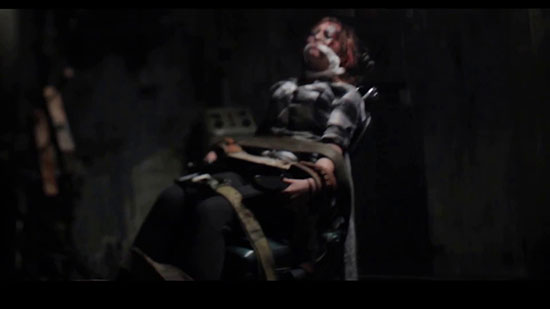 The leads are stereotypical, flat caricatures, with Lyndsey (Morgan Wiggins) being the stuck-up party-pooper, Sean (Ryan Rudolph) being her unlucky boyfriend, Lance (Brad Bell) being the group’s requisite jackass, and Ryder (Jordyn Rudolph) being his generic girlfriend. Ryan Rudolph’s character winds up with very little screen time, but Brad Bell and Jordyn Rudolph at least try to emote their way through their stereotypes, and succeed in some measure. Morgan Wiggins, who gets the most screen time, falls the hardest, seeming like a person forced into her friend’s movie, instead of the character forced into a carnival that’s she’s supposed to portray. While everyone else’s actions are too big, hers are too small, and she comes across as an irritating victim. The standout performance is given by filmic virgin Evan Miller, who has a small role as the unnerving gas station clerk that directs the doomed foursome to the ominous theme park. The rest of the cast are either nameless victims, or nonsensically-named masked maniacs, all of which do their parts, but are given no opportunities to shine.

The masks and sets are excellent, and using a pre-existing attraction as a locale was a stroke of genius. The only time it reads as cheap is when a theme-room is passed off as the real thing, such as when the character Lyndsey is chased through some sort of mine—it’s clearly not the real thing, and was an unnecessary addition. The gore is well done, also, though there are some glaring continuity errors, such as a severed ear reappearing in place, and open/closed signs flipping back and forth between shots. There’s also the issue with several of the gore scenes—particularly the fingernail removal scene—having been done better and almost shot for shot in other films (such as Eli Roth’s aforementioned Hostel). 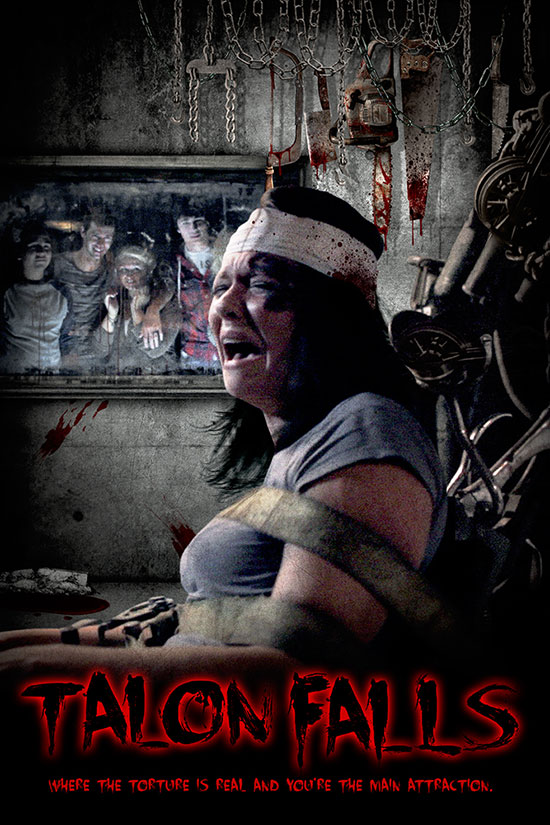 Still, I wasn’t bored during Talon Falls, and that will be enough to recommend it to those of you intrigued by the film’s use of a haunted attraction as a cinematic backdrop. Any who require a connection to characters, however, should steer clear, as the inane dialogue and stock personalities far from save the amateur acting. But, for the rest of us who aren’t so picky, grab your popcorn, turn off your brain, and have some gruesome fun.