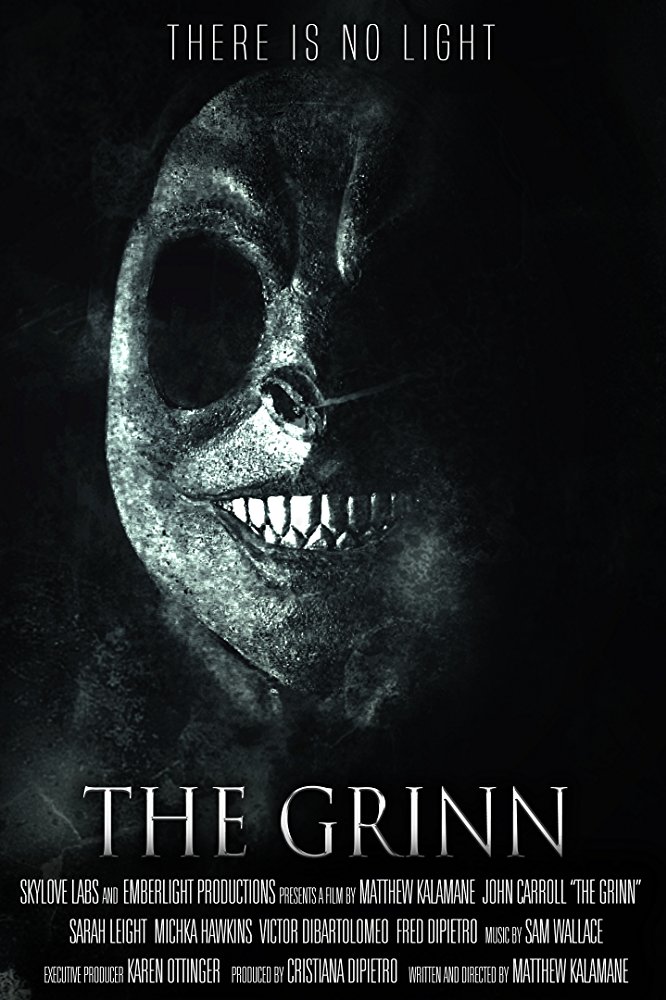 A man awakens in an empty house that he is unable to leave. Battling fatigue, injury and amnesia, and guided only by a cryptic voice on his phone, he begins piecing together fractured memories of the events that led him to be trapped. With a terrifying presence confining him inside the house, he ultimately discovers a truth more horrifying than he could have ever imagined.

In Matthew Kalamane’s second feature, The Grinn (2017), a man (John Caroll) wakes up in dark house, unable to escape and unable to remember how he got there or who he is. Whilst he scrabbles around for clues, a voice from high above cryptically tries to guide him towards the answer to all his questions. Then there’s the stranger who peers through the windows of the man’s prison, the stranger with the wide grin. Who he? Why he? How he? These questions and many better worded ones will be answered in this psychological thriller.

Working will within its limited budget – the film hardly ever leaves its one locale – The Grinn’s premise will be of interest to those who love to unpack a puzzle. After all, who doesn’t love a mystery!? Unfortunately, what looks good on paper, doesn’t always translate on the screen. The Grinn has optimum promise with minimum payback.

As if in defiance of its own title, there is very little grinning to be had in The Grinn. We’re in the realm of serious storytelling with serious people talking about serious issues. In summary: the audience is going to be wading through a bleak landscape, made all the bleaker by being set mostly in the dark.

Whilst our hero initially has no idea of who he is, this is slowly rectified when a series of repressed memories start bubbling to the surface. The man turns about to be called Vance. Vance lives with his partner and it’s fair to say they don’t get along. Vance’s seemingly buttoned-down lifestyle contrasts sharply with his wife’s hedonistic one, to the point where the relationship appears to be tearing at the seams. In one memory, Vance is seen to have been coerced into holding a wife swapping party, and he stomps around the house, staring daggers at anyone who touches his wife. When she offers up her best friend in exchange for the men she wants to sleep, this only infuriates Vance more.

There seems to be a lot of this through The Grinn, where Vance is portrayed as a man of virtue, living in the shadow of his shockingly, free willed partner. The trope of the mad, hag like wife is a tired one (See From Rape and Reverence by Molly Haskell). It can also be very boring, as we see here. There’s also the problem where his wife’s sexual, and sometimes in appropriate behavior is the result of being mad.

Mental health issues equal deviant sexual behavior equals bad; that’s appears to be the message being conveyed in The Grinn. And honestly, it’s not a great one. And it could be argued that the film’s denouement is an attempt to rebalance what we’ve seen, and retcon it. However, whichever way you slice it, it still comes across as tired and listless.

Another issue is how insufferable Vance is to hang around. Even without his memories, he still comes across as an insufferable man, whose two emotions are anger and pouting. Even when we see, during flashbacks, him seeking solace in the arms of his best friend, he barely raises a smile. Did we mention that this is a serious film for serious people? In fact, in hindsight, there’s no one you can particularly side with in The Grinn; they’re all basically vacuous and selfish.

You could argue that this is a statement on modern times and that Vance’s real prison is on mind, which refuses to allow him to understand what others are going through. Aren’t we all guilty of that? What with our social media, smart phones and jazz cigarettes? I mean, you could argue that, but you’d be simply spitting in the breeze. The Grinn is a deeply dull film about horrible people being horrible to each other. Be kind to yourself, see something else.