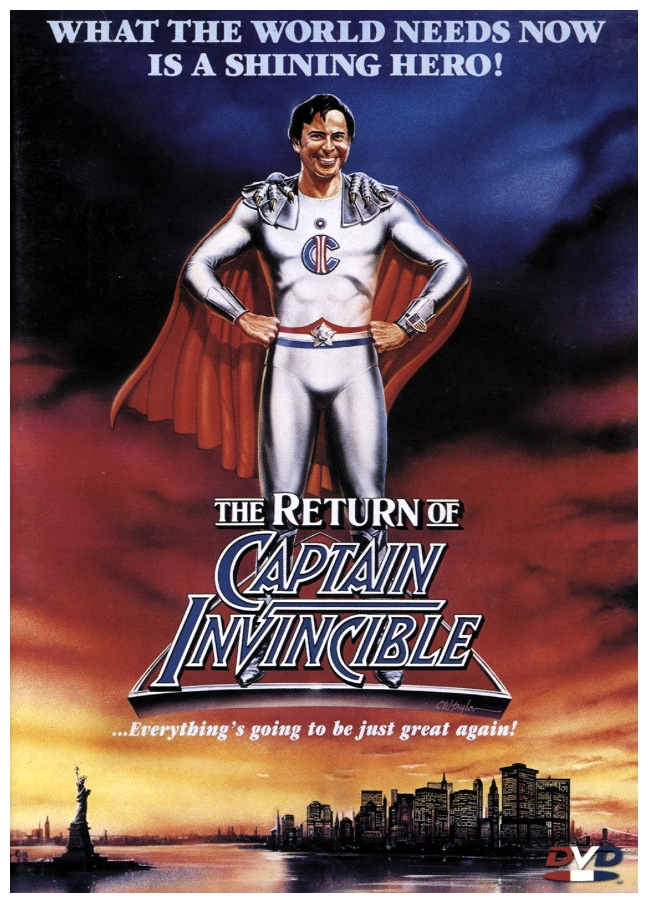 “During World War Two, Captain Invincible used his superpowers against the Nazis, and he was a hero. But when they accused him of supporting the communists, he retired to Australia. Now, after an American super secret super weapon is stolen, he’s asked to come back to help. Unfortunately, he’s an alcoholic now.” (courtesy IMDB)

Depending on my critical faculties or level of intoxication, director Philippe Mora is either the unjustly neglected surrealist auteur of Australian cinema, or the nation’s very own Ed Wood Jr. Consider the wild array of evidence presented on his CV: Where else could you find Dennis Hopper as a drunken Irish bushranger; Oscar-winner Alan Arkin as a washed-up superhero in silver spandex; werewolves reborn as part-human marsupials; or Christopher Walken anal-probed by aliens? His work is definitely unhinged at times and, almost by accident, even inspired. Celebrated for its pyrotechnical work and its star’s constant drinking, Mad Dog Morgan (1976) has Hopper as the Nineteenth Century Victorian bandit, which he turns into a boozy amalgam of art and life. The only thing out-of-character here are Morgan’s stick-on beards, which actually look worse than the fake facial hair seen in Monty Python’s Life Of Brian (1979). The excellent supporting cast includes Anakin Skywalker’s stepfather Jack Thompson, Michael Pate, and the fascinating David Gulpilil, arguably the greatest Aboriginal actor ever to walk before the camera. 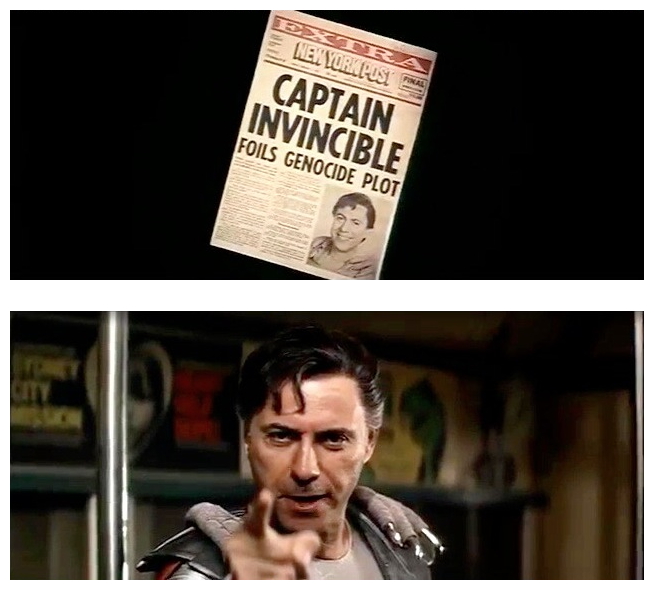 By 1983 Mora was becoming a puzzling genre unto himself. A long time before Mystery Men (1999), The Tick (2001) and Hancock (2008), yet still spellbindingly bad, The Return Of Captain Invincible (1983) is the kind of movie you can’t turn away from. Captain Invincible is a fictional comic book character that was created by Steven De Souza and Andrew Gaty for this Alan Arkin comedy. He never actually appeared in book or comic strip form but, for the purposes of this film, he was a real-life superhero. Like Captain America, Captain Invincible used his superpowers to fight against the Nazis during World War Two, and his exploits become the subject of several mock newsreels that borrow details from the comic books that flourished during the war. He also fought spies, saboteurs, black marketeers and the like, but his greatest nemesis was Mister Midnight (Christopher Lee), a Nazi scientist and evil master criminal. Unlike a lot of superheroes who wrapped themselves in the American flag, Captain Invincible outlasted WWII and continued fighting all enemies of freedom until the fifties, when he was forced to retire after his integrity and patriotism was called into question by Senator Joe McCarthy‘s witch-hunt trials. 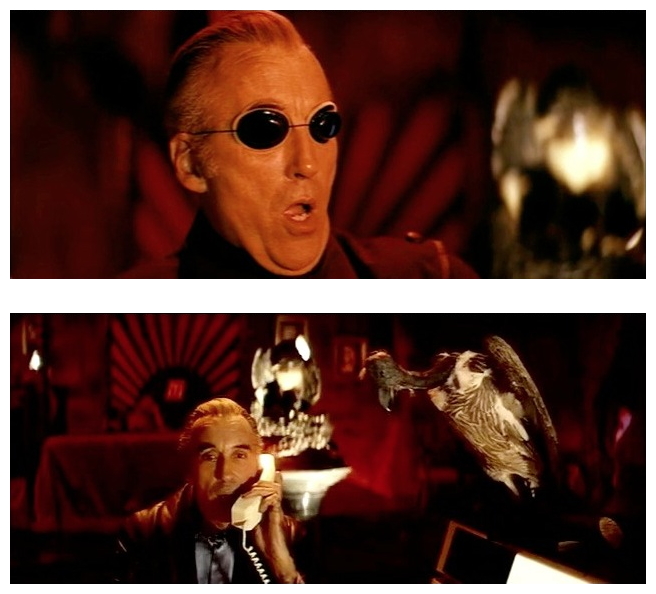 Some had even accused him of being a communist supporter and sympathiser because he wore a red cape, and he was often caught violating US airspace without a proper license, so Captain Invincible left the public stage and retired to sunny Sydney in Australia, developed a taste for cheap alcohol, and became just another homeless man living on the streets. Thirty years later his nemesis Mister Midnight resurfaced with an ingenious scheme to sell worthless property to people and use a top secret weapon called the Hypno-Ray to convince them the land is prime real estate (rather than a testing ground for nuclear missiles). The weapon was stolen from the United States, so the President (Michael Pate) sends out his best FBI agents to find Captain Invincible (Alan Arkin). Assisted by Australian policewoman Patty Patria (Kate Fitzpatrick), he is located, sobered up, retrained and, with his newfound confidence, the aged superhero takes to the skies once again to stop the criminal mastermind from killing millions of innocent souls. 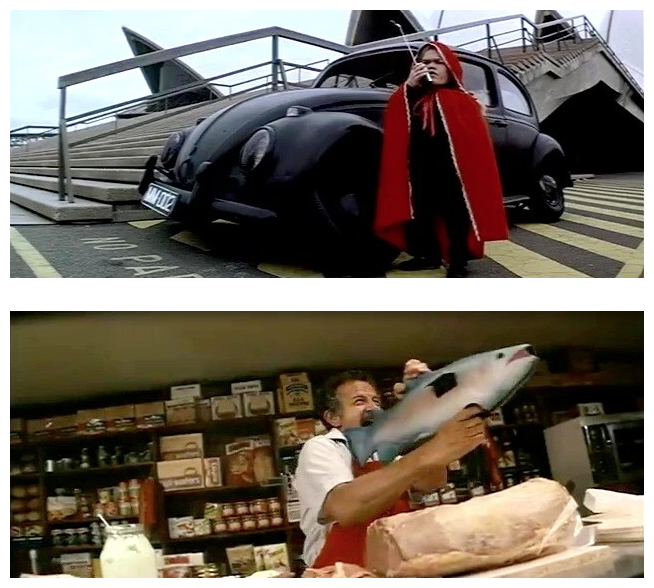 Along the way he has to battle killer vacuum cleaners, the worst blue screen ever, and some painfully inserted songs by Richard O’Brien (of Rocky Horror Show fame) which are worth enduring, if only to see Christopher Lee chastise his dwarf sidekick Little Hank (John McCall) – possibly the best duet until Marlon Brando and his midget ‘mini-me’ in The Island Of Doctor Moreau (1996). Somehow Mora was able to convince Lee to also appear in The Howling II Your Sister Is A Werewolf (1985), but the veteran actor wisely excused himself from The Howling III The Marsupials (1987) which is, incredibly, more ludicrous than the other sequels. Alan Arkin eventually played another comic book character, this time based on a real comic, as ‘Peevy’ Peabody in the Walt Disney production of The Rocketeer (1992), and his supporting cast in The Return Of Captain Invincible reads like a Who’s Who of Australian talent. I hope you like lists as much as I do! 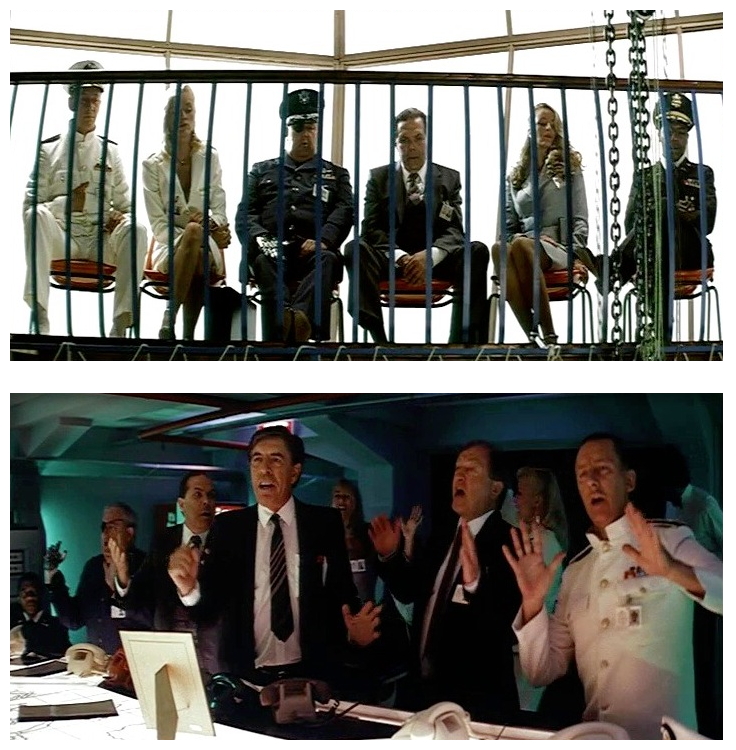 Chelsea Brown – Chicago-born performer was the first African-American regular in the iconic Laugh-In TV show, and appeared in The Thing With Two Heads (1972) before relocating to Australia where she lived for many decades enjoying a long and successful career on screen and stage, recording albums and touring the world with her own cabaret act. 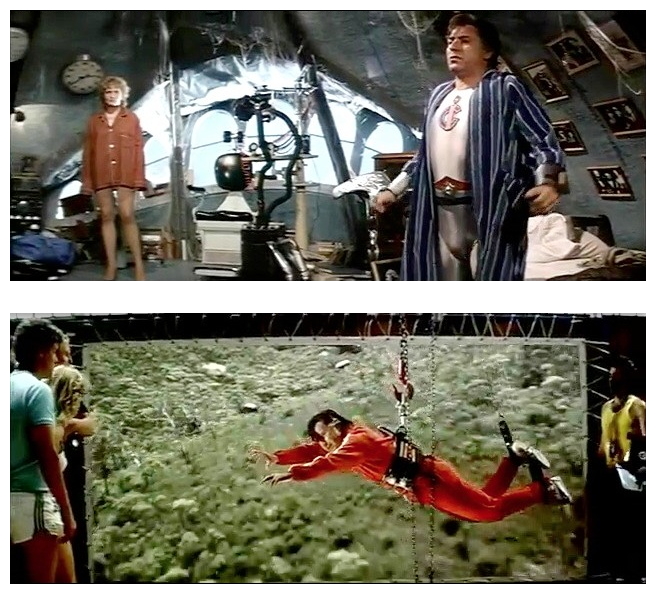 Noel Ferrier – known for The Year Of Living Dangerously (1982), Turkey Shoot (1982), The Three Musketeers (1986), awarded the Member of the Order of Australia for his services to the performing arts.

Kate Fitzpatrick – found acclaim in films like A World Apart (1988) and TV shows like Something In The Air (2000).

Bill Hunter – acting legend who worked with every notable Australian director and actor of the last three decades, in films like Gallipoli (1981), Strictly Ballroom (1992), Muriel’s Wedding (1994) and The Adventures Of Priscilla Queen Of The Desert (1994). 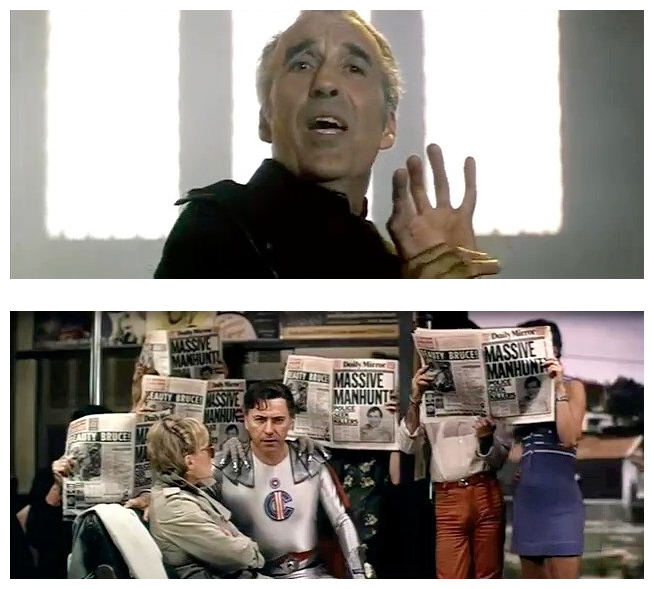 Graham Kennedy – Australia’s ‘King Of Television’ was awarded a Hall Of Fame Logie Award in 1998 and has the distinction of winning the greatest number of any performer (19 Logies and 5 Gold Logies).

Michael Pate – Sydney-born and moved to the USA in the fifties to play an assortment of ethnic characters (he became the first actor to portray James Bond’s best friend Felix Leiter in the first adaptation of Casino Royale). Returning Down Under he starred in the seventies show Matlock Police as well as producing, writing and directing Tim (1979) starring Mel Gibson and Piper Laurie. 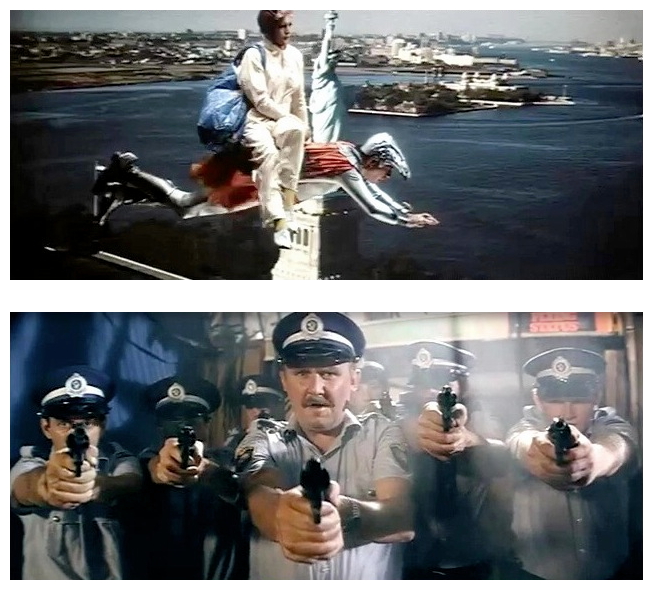 Despite the extensive talent in front of the camera, the bizarre spectacle of Alan Arkin and the rest of the cast breaking into song forges new levels of cringing embarrassment one hopes never may never be seen again. Producer Andrew Gaty didn’t agree with director Mora’s treatment of the material and extensively re-cut the film. Mora objected and the matter wound up before Minister of Home Affairs Tom McVeigh, who declared that the film was not really ‘Australian’ and thus did not qualify for the 150% tax deduction available for investors at the time. Gaty challenged this decision in court and won, and got to cut the film however he liked. Perhaps this was a mistake, or perhaps they should have just thrown in the towel…I mean, cape before the first day of shooting. The film was released at a time when the public had a renewed interest in comic book superheroes. The lavish big-budget adaptation of Superman The Movie (1978) led to a number of superhero parodies, including Hero At Large (1980), Condorman (1981) and The Greatest American Hero on television and, frankly, The Return Of Captain Invincible was amongst the worst. 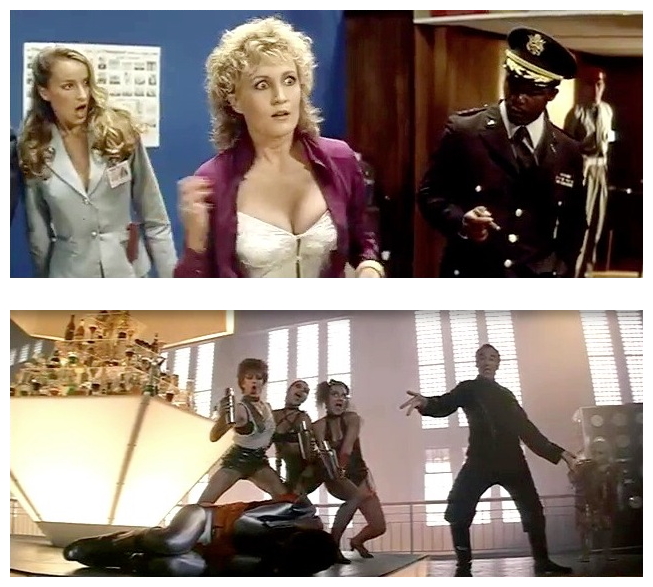 One might have thought that the combination of The Howling II: Your Sister Is A Werewolf (1985), The Howling III: The Marsupials (1987) and Communion (1989) may have driven poor Philippe away from the world of movies, but no, he returned to the genre in the nineties with the fantastically titled Pterodactyl Woman From Beverly Hills (1997) starring Beverly D’Angelo, Barry Humphries, Brion James and Moon Unit Zappa. Concerning a housewife who is turned into the titular Pterodactyl Woman by a Shaman’s curse, it goes without saying that the film went directly to the DVD remainders tables…well, I said it anyway. At the time of this writing, Mora had forty director credits on his CV and is still going strong, which reminds me of the wise words of my old mate Roger Corman: “You can’t keep a bad director down, they keep bobbing-up to the surface. Just keep your foot on their head.” Please join me next week when I have the opportunity to scoop out your brain and drop it in a bucket with another spine-tingling journey to the dark side of…Horror News! Toodles! 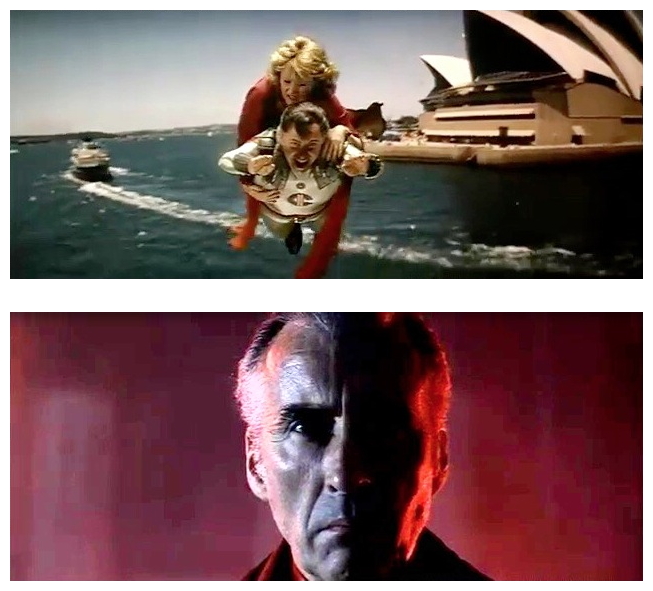 The Return Of Captain Invincible (1983)