SYNOPSIS:
“After many years of sleeping in his coffin, the vampire Lestat awakens only to find that the world has changed and he wants to be a part of it. He gathers a following and becomes a rock star only to find that his music awakens the ancient Queen Akasha and she wants him to become her king.” (courtesy IMDB)

REVIEW:
Readers familiar with Anne Rice’s bestselling Vampire Chronicles will justifiably shout “Hang on, what happened to book number two, The Vampire Lestat?” Well, bits of it have been incorporated into Australian director Michael Rymer‘s campy screen adaptation of the third volume in Rice’s undead pantheon. 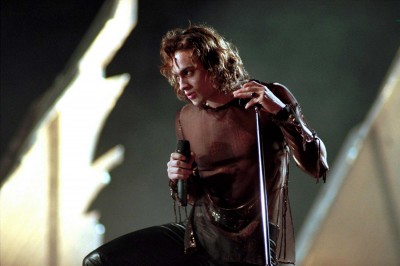 Last seen speeding over the Golden Gate Bridge at the end of Neil Jordan’s Interview With The Vampire (1994), the immortal Lestat returns in a hastily conceived and tawdrily executed film that’s probably not quite what Anne Rice and the book’s devoted legion of fans had in mind. Granted, the film emphasises action over the melancholy soul-searching of the original novels, but the composite screenplay by Scott Abbott and Michael Petroni so drastically dilutes Rice’s rich mythology that it only serves to remind fans how good the books were in the first place. Even the uninitiated will be equally under-whelmed by this vapid vampire film which is likely to raise more cackles than hackles.

Michael Rymer, whose impressive debut feature Angel Baby (1995) collected a swag of Australian Film Institute awards, manages to invest the film with a slick widescreen aesthetic that belies its modest budget, but all the visual virtuosity at his disposal could not hope to compensate for a complete lack of suspense and scares.

Waking from a self-imposed slumber by a garage band jamming near his crypt, the vampire Lestat (Stuart Townsend) rises up to reinvent himself as a Marilyn Manson-like Goth rocker who storms up the charts faster than Alicia Keys on speed. But Lestat has seized his newfound fame at the expense of his vampire brethren, who are incensed when their code of secrecy is violated. Fearful of exposure, the vengeful vamps (including a troupe of Ancients) plot to punish their selfish sibling during a sell-out concert in Death Valley. Pursued by his own kind and an apprentice paranormal researcher for the Talamasca (a secret society of vampire hunters), Lestat finds an unexpected ally when his unholy music awakens Akasha (Aaliyah), the mother of all vampires.

With a good third of Rice’s novel unfolding in ancient Egypt, the first sign that things were going amiss was the film’s location – good old Melbourne, Australia, while an eclectic mix of Aussie talent (Tiriel Mora, Bruce Spence, Matthew Newton), European stars (Vincent Perez, Lena Olim), an Irish lad and an American pop music diva, results in the most bizarre role call since Mad Max III Beyond Thunderdome (1985). None of this does the film any favours, and neither does casting newcomer Stuart Townsend as one of fiction’s most beloved anti-heroes. More pale Goth boy than a dark immortal prince, Townsend’s truly stultifying charisma-free performance makes Tom Cruise’s interpretation look definitive.

Making Anne Rice’s literary Queen look like Grace Jones in Vamp (1986), Aaliyah’s much-touted role leaves her little to do except slink around looking vampish, or romping in a petal-filled tub like she’s some sort of American Beauty (1999). But there’s no disputing her substantial screen presence, one that sudden tragic circumstances have ensured will never mature – for in the mortal realm of film-making, exploitation and tragedy can sometimes fatally converge. On August 25th 2001, Aaliyah and eight others were killed in an airplane crash in The Bahamas after filming the music video for her single Rock The Boat. The pilot was unlicensed at the time of the accident and had traces of cocaine and alcohol in his system.

Like Brandon Lee’s unfortunate demise during the filming of The Crow (1994), the subsequent loss of Aaliyah lends poignancy and pertinence to a film that might have otherwise vanished without a trace. It’s with this thought in mind I’ll request your presence next week when I have the opportunity to present you with more unthinkable realities and unbelievable factoids of the darkest days of cinema, exposing the most daring shriek-and-shudder shock sensations to ever be found in the steaming cesspit known as…Horror News! Toodles! 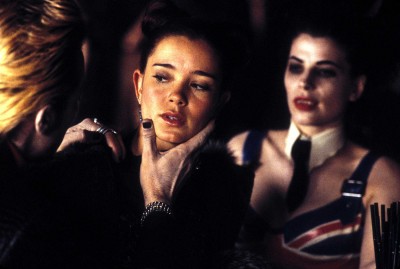