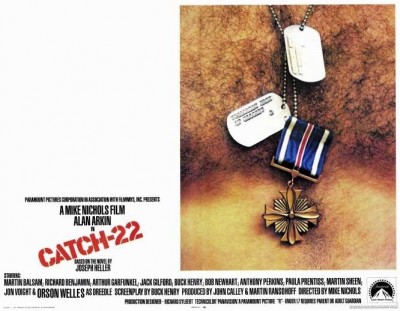 SYNOPSIS:
“A bombardier during World War Two tries desperately to escape the insanity of the war. However, sometimes insanity is the only sane way cope with a crazy situation. Catch-22 is a parody of the military mentality and bureaucratic society in general.” (courtesy IMDB)

REVIEW:
Hot off the enormously successful film The Graduate (1967), director Mike Nichols could have had any production bankrolled, and just to prove it he chose Joseph Heller‘s darkly comic novel Catch-22 (1970), long considered unfilmable. At the time, the film was largely written-off as a well-intentioned but colossal failure by critics and audiences, but there’s no doubt that amongst this episodic, fragmented movie there are far too many good things in it to ignore. 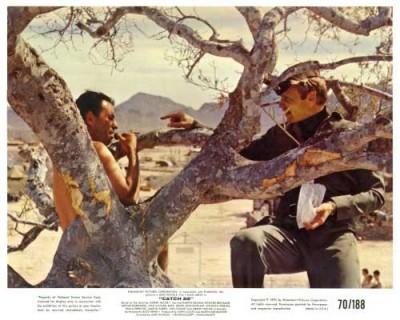 Despite a career consisting of superb performances, the last thirty years have inexplicably seen Alan Arkin become one of Hollywood’s forgotten actors, largely reduced to playing homely father-figures, most recently seen as the Chief of Control in Get Smart (2008). As Captain Yossarian, a bombardier who’ll do anything to prove he’s too insane to fly an ever-increasing number of missions, Arkin is nothing short of spectacular. Whether angrily ranting, passively glowering or just rolling his eyes in disbelief, there lurks behind those exasperated intelligent peepers a sparking fuse that constantly threatens to go supernova. But for Arkin’s Yossarian, pretending to be crazy isn’t that easy when those surrounding him are ten times more loony than he could ever hope to fake. 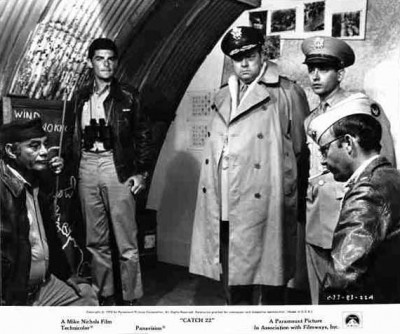 In what must rank as one of the greatest supporting casts ever assembled, the film reunites Psycho (1960) co-stars Anthony Perkins and Martin Balsam, along with Jon Voight as the grinning, opportunistic capitalist Milo Minderbinder, Richard Benjamin as Major Danby, and Benjamin’s wife Paula Prentiss as the wickedly sexy Nurse Duckett. Joining them are fresh-faced future stars like Martin Sheen, Art Garfunkel, Bob Balaban, Austin Pendleton, Charles Grodin and Bob Newhart, ably assisted by old pros Jack Gilford and Norman Fell. Oh, and some guy named Orson Welles. In a film packed with gutsy broad performances, some of the ensemble register more strongly than others, but it’s not from lack of trying.

After the neat and clever cutting techniques he employed on The Graduate, Nichols stepped back to give his cast breathing room and the chance to really build scene rhythms with his insistence on long uninterrupted takes. The results are often spellbinding although he told me it was a technique he’d later regret, it should be mentioned that nowadays Nichols’ films are visually indistinguishable as those of, say, Ivan Reitman. But here there’s no doubt that he and cinematographer David Watkin were seriously onto something. 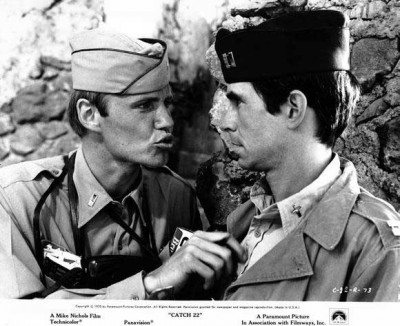 Unlike most of the mammoth-budgeted epics of the late sixties, Catch-22 doesn’t have the dated ‘arc light in the face’ look that dominated films like Tora! Tora! Tora! (1970) and Hello Dolly (1969). Neither does it have the murky look introduced by M*A*S*H (1970). Watkin’s groundbreaking work anticipates the modern style adopted by such maverick photographers as Gordon Willis and Vilmos Zsigmond, whose radical experimentation in the early seventies brought us such astonishing looking films as Klute (1971) and McCabe And Mrs. Miller (1971). Watkin’s contribution and influence on cinematography has remained largely unsung, but his work here and his equally luminous job on Richard Lester films show a true master at work. 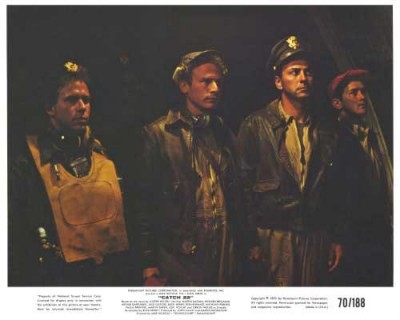 In fact, much to the producer’s frustration, Watkin insisted they shoot at exactly 2.45pm in order to achieve the hot burnt-out look of the film. Whatever the process, it’s a tangible heat that scorches the screen. The marvelous scenes depicting the flight crew’s wildly out-of-control bombers and their hopelessly languid attempts to take-off are nothing short of awesome, filmed through a massively long lens and a deliriously surreal heat haze. The scenes simulating the crew in flight are often jaw-dropping in their realism, the result of some of the finest front-projection seen since the apes discovered the monolith in 2001: A Space Odyssey (1968).

Catch-22 is unlikely to please audiences raised on Michael Bay films, as it undoubtedly makes some demands on the viewer, and its attempts to blend gallows humour, pathos and ribald jokes doesn’t always work. Catch-22 never grabbed audiences the way that the similarly-themed M*A*S*H did, but boy, there sure is some magnificent stuff on display here – if only all failures were this awesome. And it’s on that note I’ll vanish into the night, after first inviting you to rendezvous with me at the same time next week when I discuss another dubious treasure for…Horror News! Toodles!