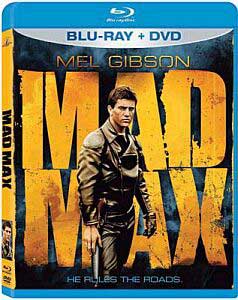 SYNOPSIS:
“A vision of an apocalyptic future set in the wastelands of Australia. Total social decay is just around the corner in this spectacular cheap budget gang orientated road movie. Where the cops do their best to lay down the law and the outlaw gangs try their hardest to defy the system. Leather-clad Max Rockatansky – husband, father and cop turns judge, juror and executioner after his best friend, wife and baby are killed. Here we see the final days of normality of a man who had everything to live for, and his slip into the abyss of madness. Mad Max is the antihero on the road to vengeance and oblivion.” (courtesy IMDB)

REVIEW:
If the seventies were the so-called ‘renaissance’ of Australian film-making, then surely Mad Max (1979) is the Mona Lisa. Sandy Harbutt’s bikie culture film Stone (1974) had already ushered in a new breed of ultra-violent drive-in fare, but it wasn’t until 1979 that doctor and film buff George Miller‘s unheralded savagely anarchic ode to the road detoured the Australian film industry away from the period frocks and sexual repression of Picnic At Hanging Rock (1975), The Getting Of Wisdom (1977) and My Brilliant Career (1979), and onto more dangerous uncharted highways. The film is largely homogenous to the western – outlaw posse rolls into town culminating in a showdown with lone marshal Mad Max is like a kinetic concoction of Kurosawa samurai and Leone spaghetti, whose slow-build introduction to the hero – the creak of leather, a resolute profile, mirrored sunglasses – pays off in the best Clint Eastwood tradition. While Mad Max has since become synonymous with the term ‘post-apocalyptic’ thanks to the desert-bound sequels, the original actually takes place ‘a few years from now’ where society has degenerated into crime and disorder, not unlike the dystopia of Stanley Kubrick’s A Clockwork Orange (1971).

In the post-apocalyptic Australian state of Victoria all manner of scum proliferate on the highway while a diminished, leather-clad police force attempt to keep the peace in their suped-up Ford Interceptors. When a fire-and-brimstone terminal loony named The Nightrider gets his comeuppance from top pursuit cop Max Rockatansky (Mel Gibson), his biker devotees – led by the soft-spoken psycho The Toecutter (Hugh Keays-Byrne) – get even by threatening Max’s wife (Joanne Samuel) and child (amusingly nick-named Sprog) with predictably tragic consequences. The fabulous breakneck opening sequence involving The Nightrider, pursuit Interceptors, an errant toddler and a caravan best displays fledgling director Miller’s remarkable technique that belies the film’s meagre budget (which, these days, wouldn’t even cover Mel’s salary). It’s this make-do approach to production – like James Cameron’s similarly guerilla-style The Terminator (1984) – that gives Mad Max much of its kick. Largely criticised on initial release for its excessive and often sadistic violence, the 18+ rating is now more a sign of the times. Miller skillfully realises the film’s more intense passages (including a vicious attack on a young couple) using little more than rapid editing and simple but effective visual gimmicks – watch out for the bug-eyed demise of one victim, a technique Miller used again in Twilight Zone The Movie (1983). 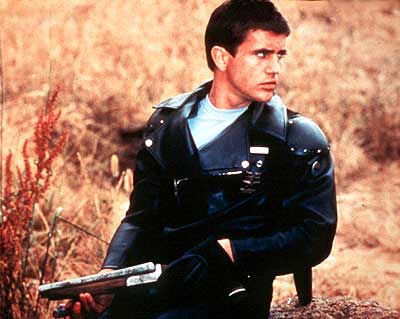 Baby-faced Mel, fresh out of Australia’s National Institute of Dramatic Art and the film Summer City (1977), acquits himself remarkably well as the vulnerable hero whose rite of passage from emotionally sensitive family man to merciless avenger aptly mirrors the societal decay of Miller’s imperfect future. Mel’s instant screen presence is complimented by the cavalcade of crazies that comprise The Toecutter’s gang – Johnny The Boy, Bubba Zanetti, Cundalini – and a cadre of Australian soapie stars including Gil Tucker (Cop Shop), Joanne Samuel (The Young Doctors) and Roger Ward (Number 96), not to mention a feisty shotgun-toting Sheila Florance (Prisoner aka Caged Women). Released in the USA with re-dubbed American accents, many viewers amazingly assumed that Mad Max was Italian or Spanish in origin. 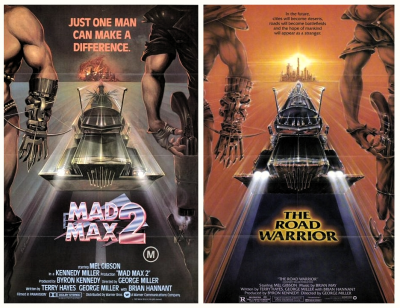 Mad Max II (1981) was retitled The Road Warrior for release outside Australia so as not to alienate film-goers who had not seen the original, and began shooting at Broken Hill in New South Wales where the arid terrain and endless bitumen expanses provided a convincing post-apocalyptic look. In the sequel, a nomadic Max and his blue heeler dog scavenge the wastelands and share a can of dog food before befriending a feral kid (Emil Minty) who wields a lethal steel boomerang and a loony gyro-captain (Bruce Spence). When the inhabitants of an isolated fuel compound are besieged by a gang of mohawked bikers and their boss – a hockey-masked meat-head named Humongous (Kjell Nilsson) – Max offers his services: “You want to get out of here? You talk to me.” Conceived on a grander scale than its modest progenitor, Mad Max II sent vehicular mayhem and astonishing stunts into maximum overdrive, topping the first film’s impressive (but budget-constrained) set pieces and reaching its apogee with a sublimely choreographed climactic tanker roll. 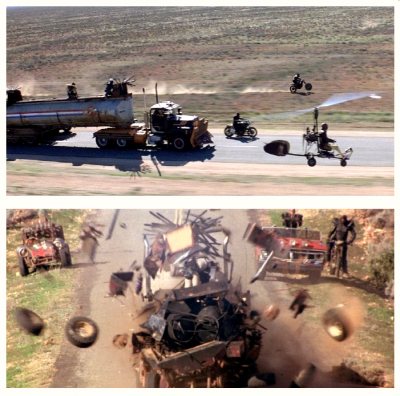 Producer Byron Kennedy and director George Miller were already considering ideas for a third film when Kennedy’s life ended tragically in a helicopter crash in 1983. Still intent on completing the project, Miller turned to his Mad Max II co-writer Terry Hayes and together they sought to re-invent the concept once more with a screenplay that recast Max as Jesus Christ in leather pants, playing saviour to a bunch of kids marooned on a desert oasis. Budgeted at AUS$12 million, Mad Max III Beyond Thunderdome (1985) began production in opal-rich Coober Pedy in South Australia – whose barren landscapes would later be used for Pitch Black (2000) – and features some of the most unusual casting in a major Australian film. Joining Mel – now an established star but still two years away from Lethal Weapon (1987) – was an over-the-top Tina Turner as Aunty Entity, an exuberant Angry Anderson as Ironbar, Mark Spain as Mister Skyfish, Robert Grubb as Pig Killer, and the late great Frank Thring, sweating like the pigs used to supply Bartertown with its methane gas. Having won over Aunty with his charm but incurring the wrath of Master-Blaster (Angelo Rossitto and Paul Larsson), Max must duel to the death in the titular arena before being exiled beyond where he meets the aforementioned kids, who seem to have strayed in from another film. It’s here in its second half that Mad Max III Beyond Thunderdome really hits the skids, before a rather half-hearted chase scene ensues with Tina behind the wheel of a fearsome-looking jalopy.

It was announced by George Miller in October 2009 that filming of a fourth film, Fury Road, would commence at Broken Hill in New South Wales in late 2010, ending years of speculation. This announcement attracted widespread media attention, with the popular speculation on whether Mel Gibson would return as Max, even though this had previously been considered unlikely. In October 2009 it was also announced that British actor Tom Hardy was in negotiations to take the lead role of Max, and Charlize Theron will also play a lead role. The plot will be set shortly after the events of Mad Max III Beyond Thunderdome.

Three decades later, the original Mad Max has endured remarkably well and, while having since been consigned to the shadow of its arguably superior sequel, has lost none of the rambunctious energy and visceral vigour that’s propelled it into the annals of true cult classics. And it’s with that thought in mind I bid you farewell, and please join me again next week as we see what the postman leaves on my doorstep – and sets on fire – in Horror News! Toodles! 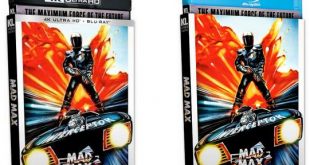 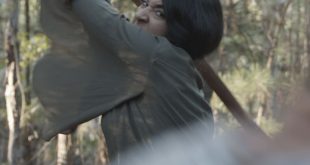