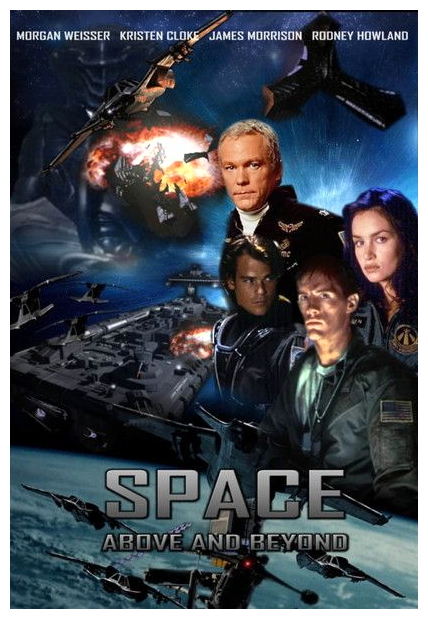 “We thought we were alone. We believed the universe was ours. Until one night in 2063, on an Earth colony sixteen light-years away, they struck. Now we are at war. My name is Lieutenant T.C. McQueen. I’m an In Vitro, a race of artificially gestated humans. I command a marine corps squadron, the 58th, called the Wildcards. We fight when called, in space, on land and at sea. To lose this war means more than defeat. To surrender is to never go home. All of us must rise to the call – above and beyond.” (opening narration) 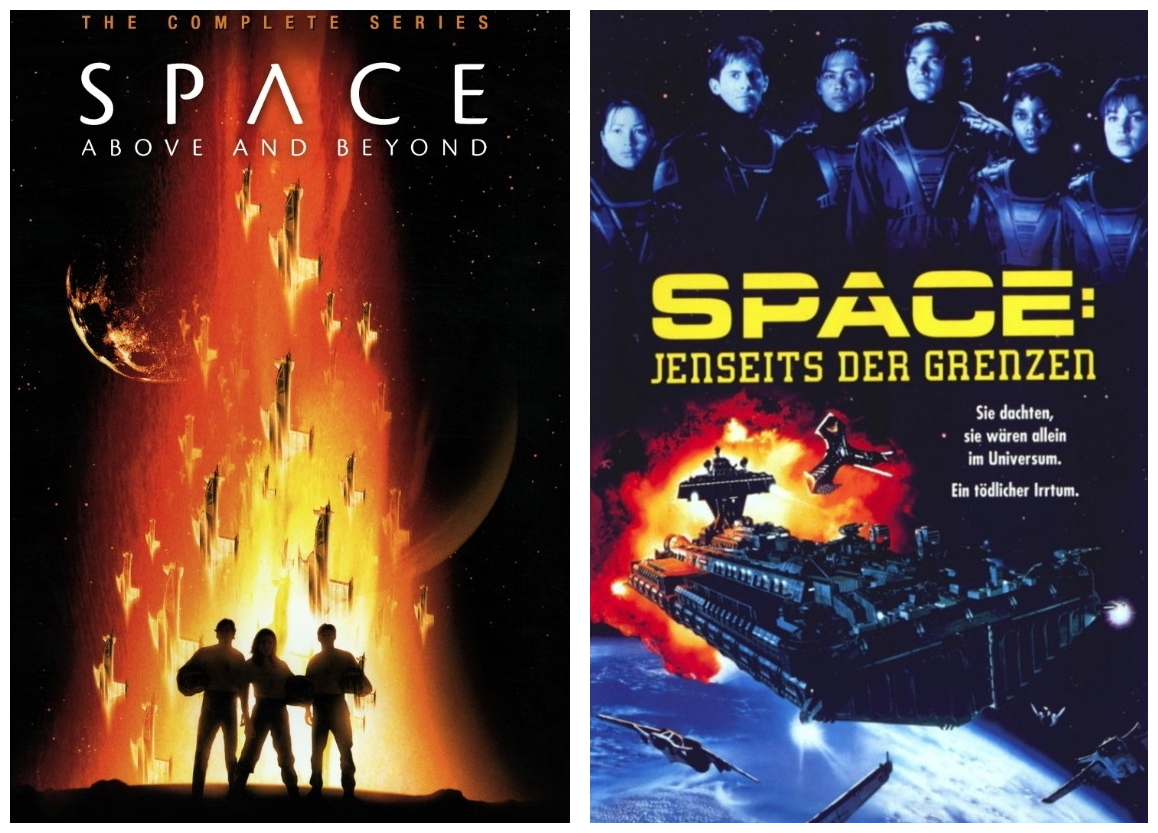 Space: Above And Beyond was produced by the Fox Network who had big plans for five seasons but, due to poor ratings, it was cancelled after only 23 episodes broadcast late-1995 and early-1996. Nevertheless it was critically acclaimed, nominated for two Emmys and a Saturn Award, and is considered by many today as ahead of its time. Set in the year 2063, the show focuses on the members of the United States Marine Corps Space Aviator Cavalry 58th Squadron, better known as the ‘Wildcards’. Stationed on the space carrier USS Saratoga, they act as infantry and pilots of SA-43 Endo/Exo-Atmospheric attack jet fighters called Hammerheads. For its time, Space: A&B was a daring approach to a television space show. There’s no central location, the plot-line involves an interstellar war, characters actually get killed on screen, and the primary alien race is depicted as a ruthless and ugly threat to mankind (instead of a bunch of cuddly politically-correct hunks and babes with bumps on their foreheads). 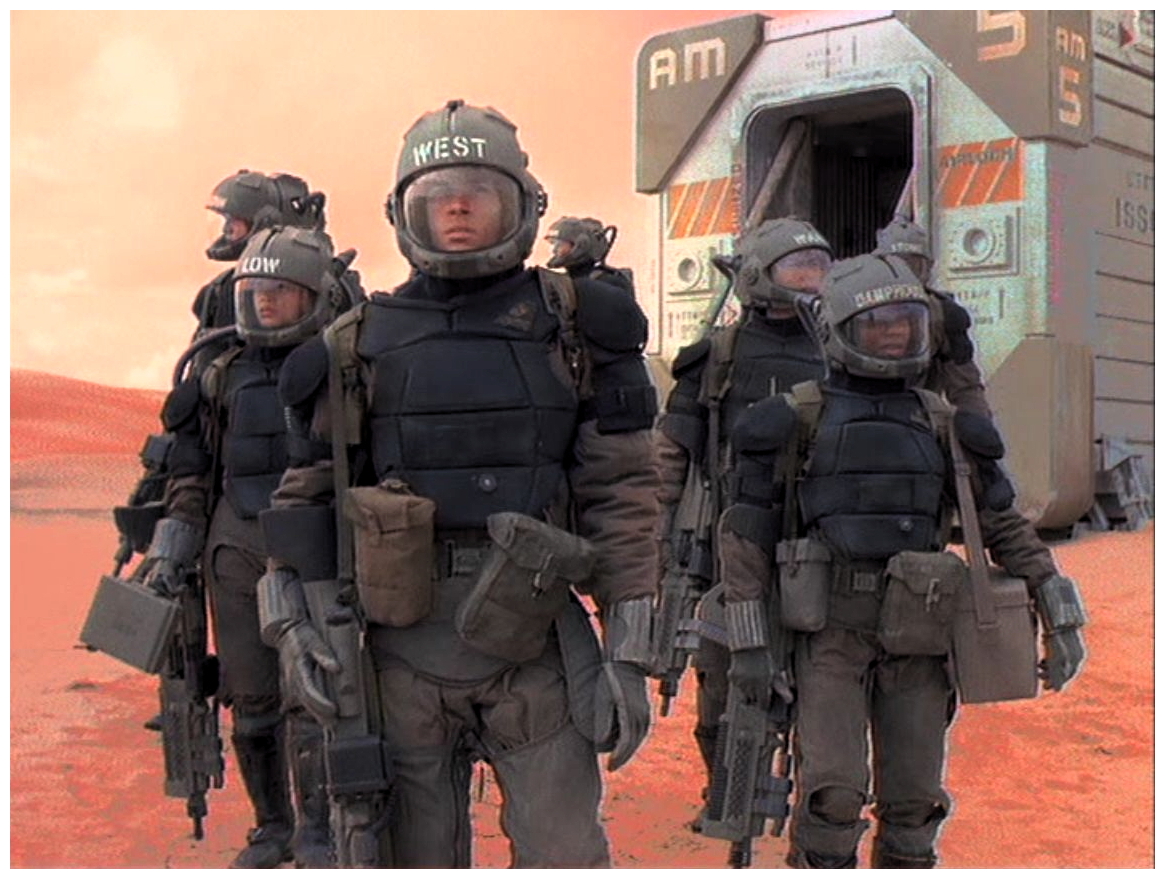 Space: A&B was an attempt to meld contemporary military movies like Full Metal Jacket (1987) and gritty television shows like Combat! (1962) with science fiction tropes like UFO (1970), Battlestar Galactica (1978), Aliens (1986) and Robert Heinlein‘s novel Starship Troopers (loosely adapted in 1999). Even the characters’ names refer to old war movies (Steve McQueen, Gary Cooper, Howard Hawks, etc.). It follows a bunch of raw cadets of both sexes as they’re trained to be soldiers and fighter pilots in a future war against a deadly extraterrestrial menace. Space: A&B exists in one of those cinematic nether regions between the far future and the here-and-now. Faced with a limited television budget, producers Glen Morgan and James Wong elected to sprinkle futuristic elements into earthly locations in order to give the show a contemporary look but, once the show actually gets off Earth it offers a far more imaginative portrayal of alien worlds and outer space environments than Babylon 5 or any of the Star Trek spin-offs. 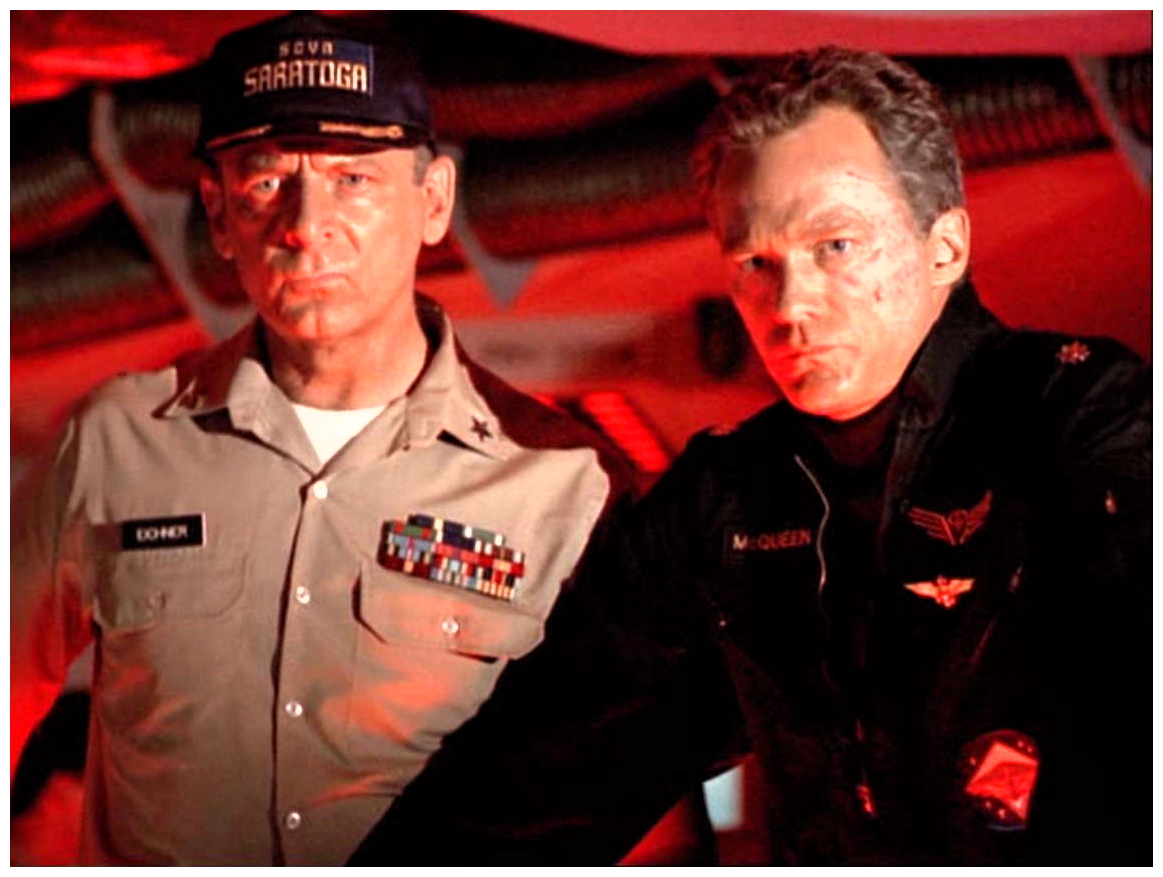 Shots of the space troopers in their pressure suits on Mars qualify as some of the few convincing planet exteriors of any show of the era – filmed in Coober Pedy, South Australia, a desert location that would later be used in both Pitch Black (2000) and Red Planet (2000). Space: A&B also benefits enormously from its pedigree as an offshoot of the creative forces from the hit show The X-Files. There’s a refreshing sense of urgency and dark drama to it that dispels the patina of security that had coated Star Trek. This was a show where the viewer isn’t faced with a tried-and-true formula or plot-lines that are guaranteed to be resolved (if not totally ignored) by episode’s end. The opening two-hour pilot qualifies as a mini-theatrical movie, a terrific production with unusually authentic-looking sets and hardware. Art design influences range from the Alien (1979) franchise – particularly the pressure suits and transport interiors – to a NASA-like realism for the Earth’s space launching gantries and ship sets. 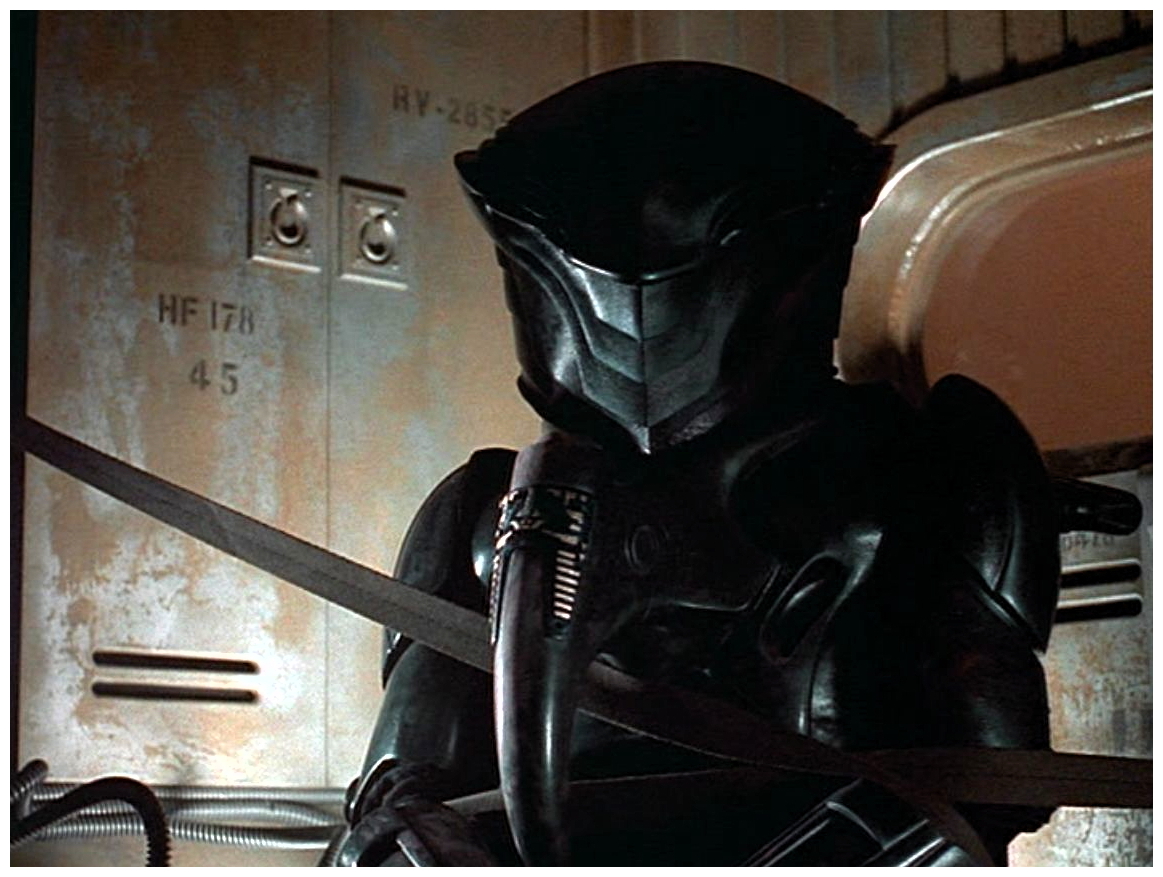 How realistic? Spies from a visiting Russian freighter were caught taking photos of the full-scale models of Hammerhead fighters after mistaking them for real practical prototypes (these full-sized mock-ups were built and stored at the Williamtown RAAF Base in Australia, hence their confusion). The alien fighter ships look like pincer-shaped black versions of the old Tholian vessels in the original Star Trek, while the aliens wear Predator (1987)-like suits of armour. The show also represented another leap for CGI on television. CGI was becoming old-hat by that time, nevertheless there’s photo-realistic texture, depth and smoothness to much of the work in Space: A&B that forces even the most effects-jaded viewer to take notice. The climactic battle in an asteroid field in some cases surpasses Industrial Light & Magic‘s work in Star Wars V The Empire Strikes Back (1980), including some stunning shots of attacking ships backlit by a massive white sun. 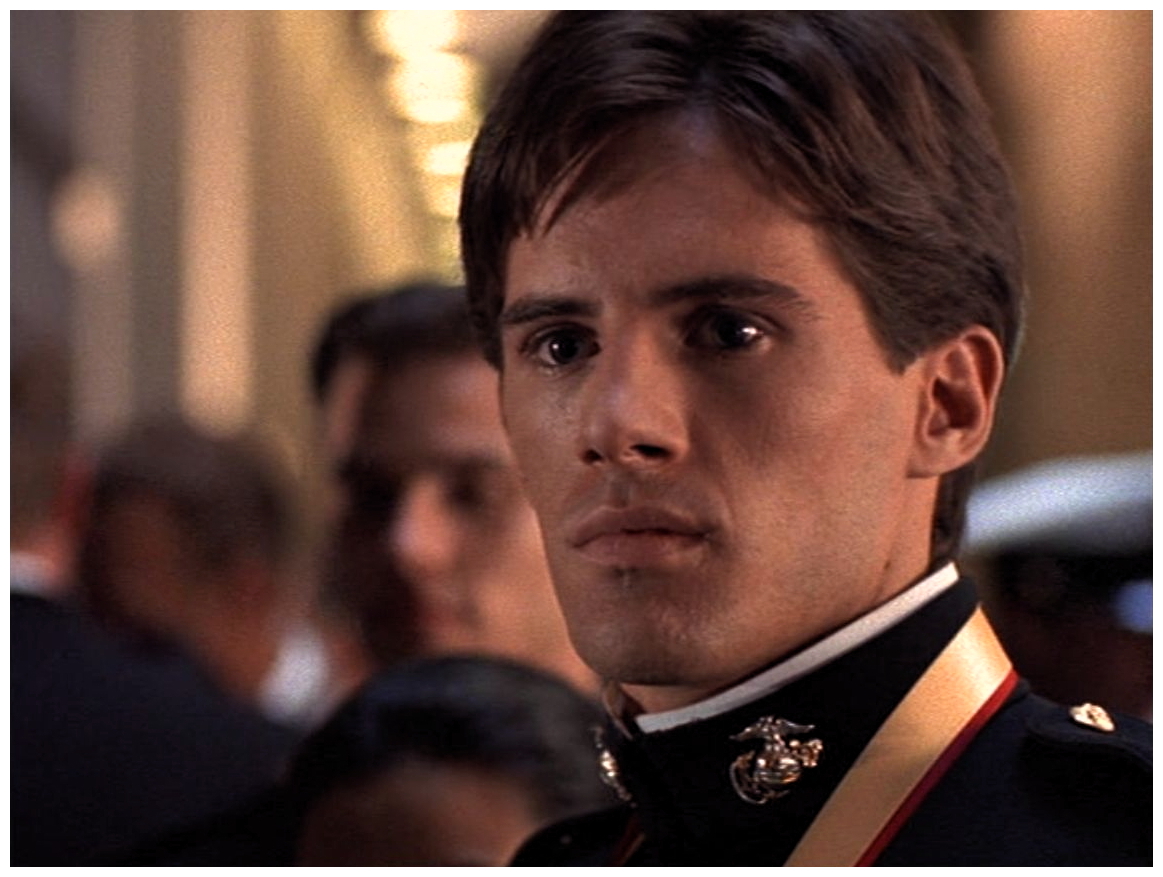 Space: A&B’s conceit is to juxtapose its star-spanning storyline and frighteningly realised alien threat against some of the hoariest cliches ever, and that’s where a wait-and-see critical approach to the show may have come in. Other than R. Lee Ermy bringing an almost verbatim replay of his drill sergeant schtick from Full Metal Jacket (1987), Space: A&B’s characters don’t exactly bowl the viewer over with their originality and charm. There’s a literally star-crossed lover named Lieutenant Nathan West (Morgan Weisser) desperate to find his bride-to-be who may have been killed by aliens. Lieutenant Cooper Hawkes (Rodney Roland) is an embittered rebellious member of an oppressed minority, and Lieutenant Shane Vansen (Kristen Cloke) is a war-scarred young woman hoping to set her wounded psyche straight by kicking some alien butt. They’re a ragtag bunch of misfits who all wind up enlisting in a future Top Gun program that trains them to be space fighter pilots. 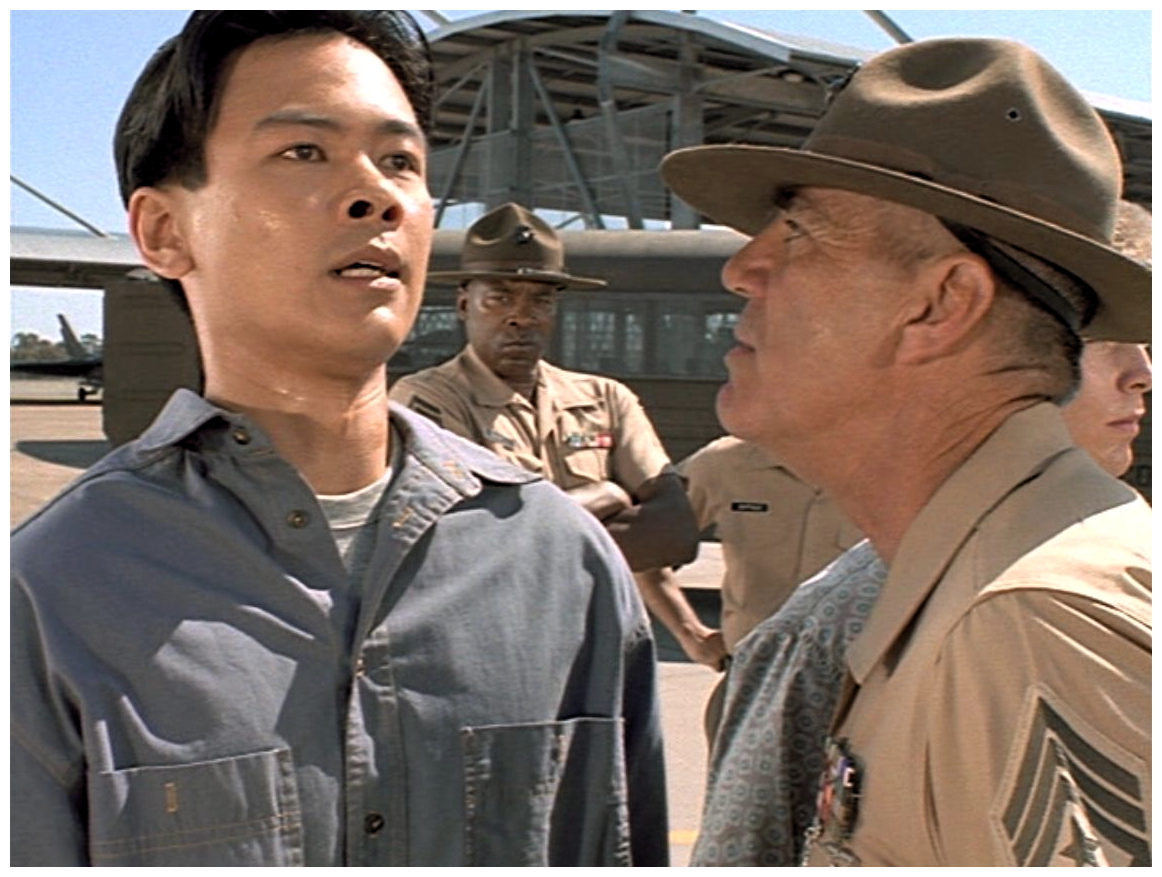 There’s a great deal of silent brooding by everyone involved as the extraterrestrial menace begins to unfold, as well as the inevitable conflicts between the cadets and their arrogant superiors, and between the ‘Tank’ (a less-enlightened term referring to the minority representative, a product of In Vitro Fertilisation) and the other cadets. You don’t have to be a Betazoid to predict that a bar scene will undoubtedly lead into a fight scene, or that the rebellious Tank (who specialises in breaking ALL the rules) will show the others a thing or two about space dogfighting before the end of the first episode. That being said, what makes Space: A&B work is David Nutter‘s high-tension direction, a cracking soundtrack by the highly underrated Shirley Walker and distinctive sound effects (many of which were recycled in Futurama). This is where the show’s creative genealogy as a product of the people involved with The X-Files pays off. Both shows play out like feature-length films, with a great sense of scope and a way of making even the talkiest scenes of exposition crackle with narrative pull. 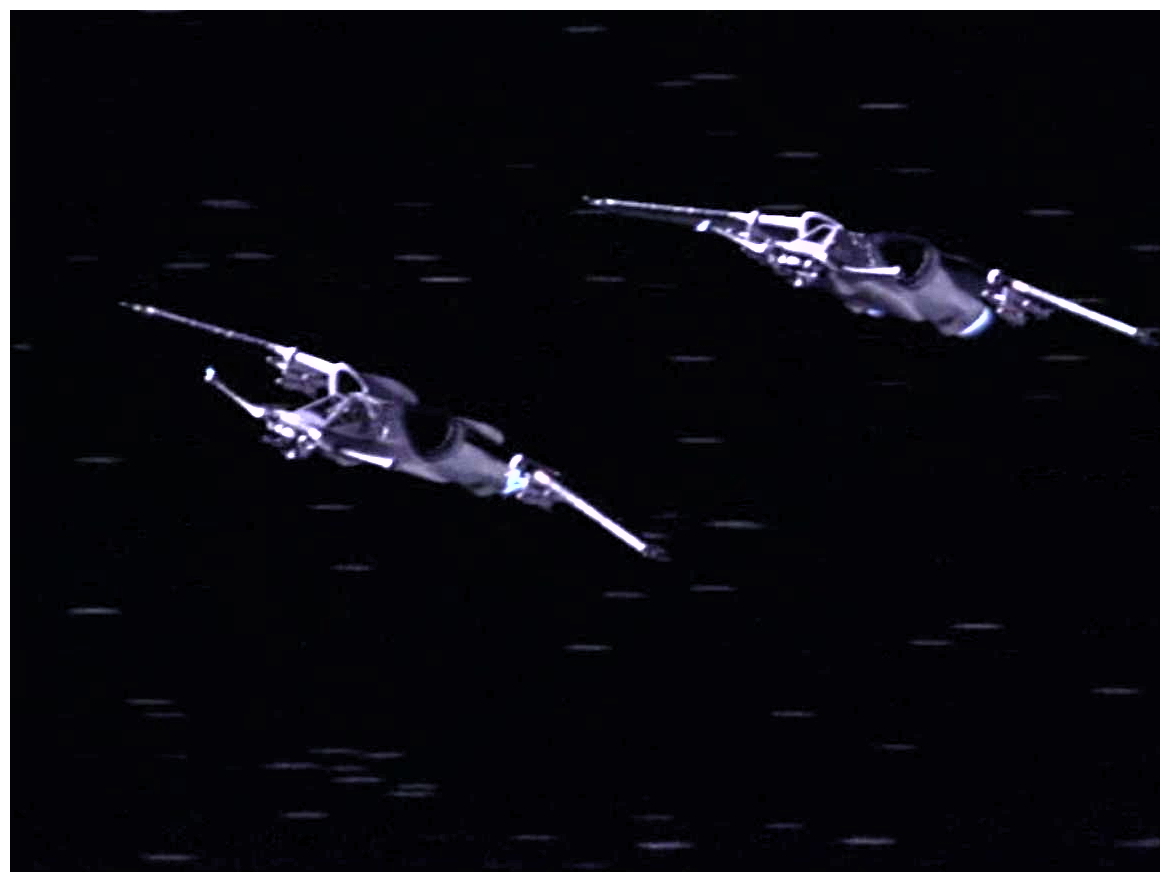 Compare this to any of the other science fiction shows around at the time – SeaQuest DSV or Earth 2 – and you’ll find that Space: A&B storytelling style is not unlike a Michael Crichton page-turner and hardly gives you a chance to change channels. It’s a given that these characters are hackneyed, borrowed from genre movies like An Officer And A Gentleman (1982) and Top Gun (1986) that were themselves rehashes of earlier service and WWII films like From Here To Eternity (1953). The idea is to place these familiar tropes into a bizarre situation and play the scenes out as if everything is absolutely real – the danger, the science, the emotions. The X-Files started out as an inherently ridiculous concept, a National Enquirer story brought to life, with super-serious FBI agents investigating UFO abductions and the like, but the texture and narrative power of the series conspired to make the silliest plot idea play out as compellingly as The Silence Of The Lambs (1991). 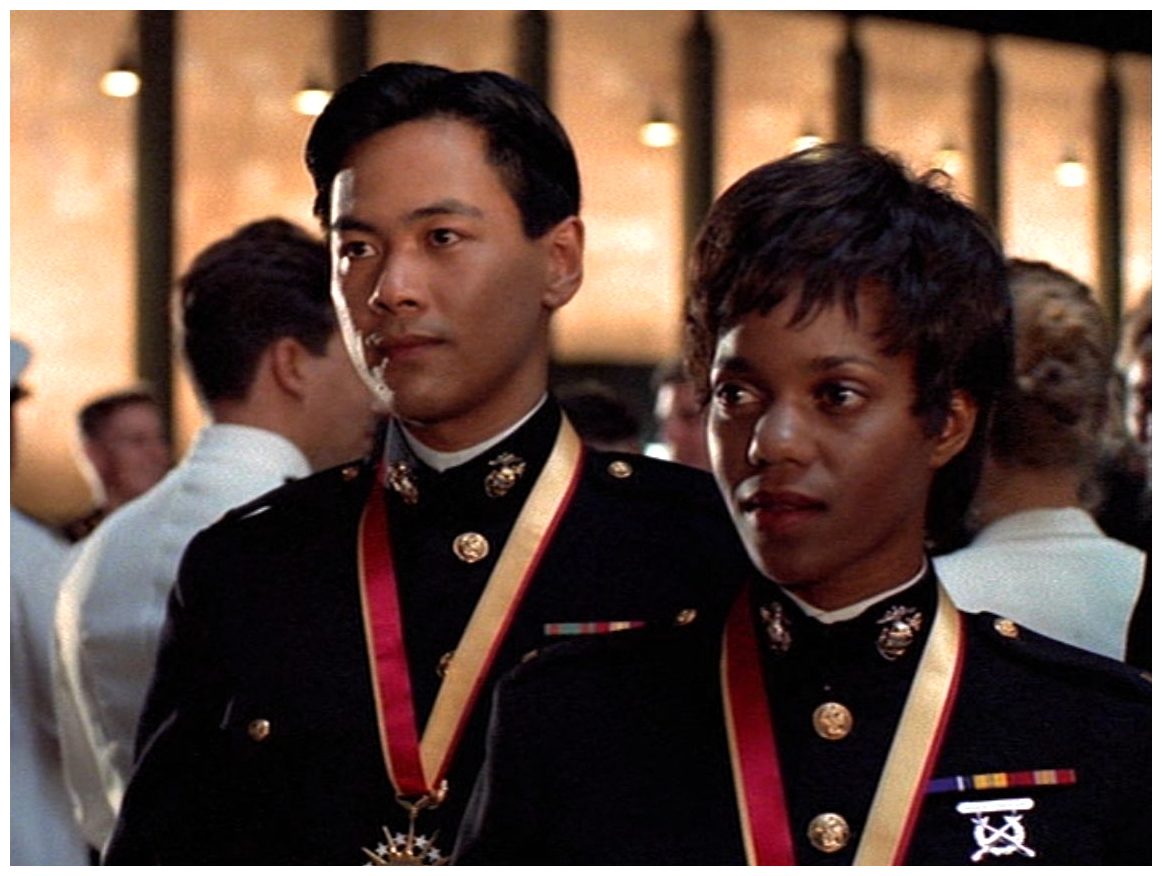 That’s what the producers of Space: A&B attempted here – to play Battlestar Galactica for real. You won’t find Space: A&B’s enemy aliens playing evil sheriffs in gun-toting future-western plots or being ambushed Ewok-style by kids dressed up like Vikings. Space: A&B’s aliens are immediately mysterious, scary and even strangely pitiable (as when a captured alien soldier commits a grotesque suicide after a space marine offers it a drink of water). Sadly, Space: A&B’s inherently adolescent characters failed to appeal to audiences, and the show was cancelled after only 23 episodes. The final episode ends with a cliffhanger yet, with Earth in a much stronger strategic position, there is still hope despite the losses and sacrifices. These closing elements of the plot were written at a point when the producers knew that the show was likely to be cancelled. The remaining four seasons of story-arc was shelved indefinitely and characters remain undeveloped (by the end of the final episode, Hawkes and West are still alive, McQueen is fatally injured, and the rest of the cast are either dead or missing in action). 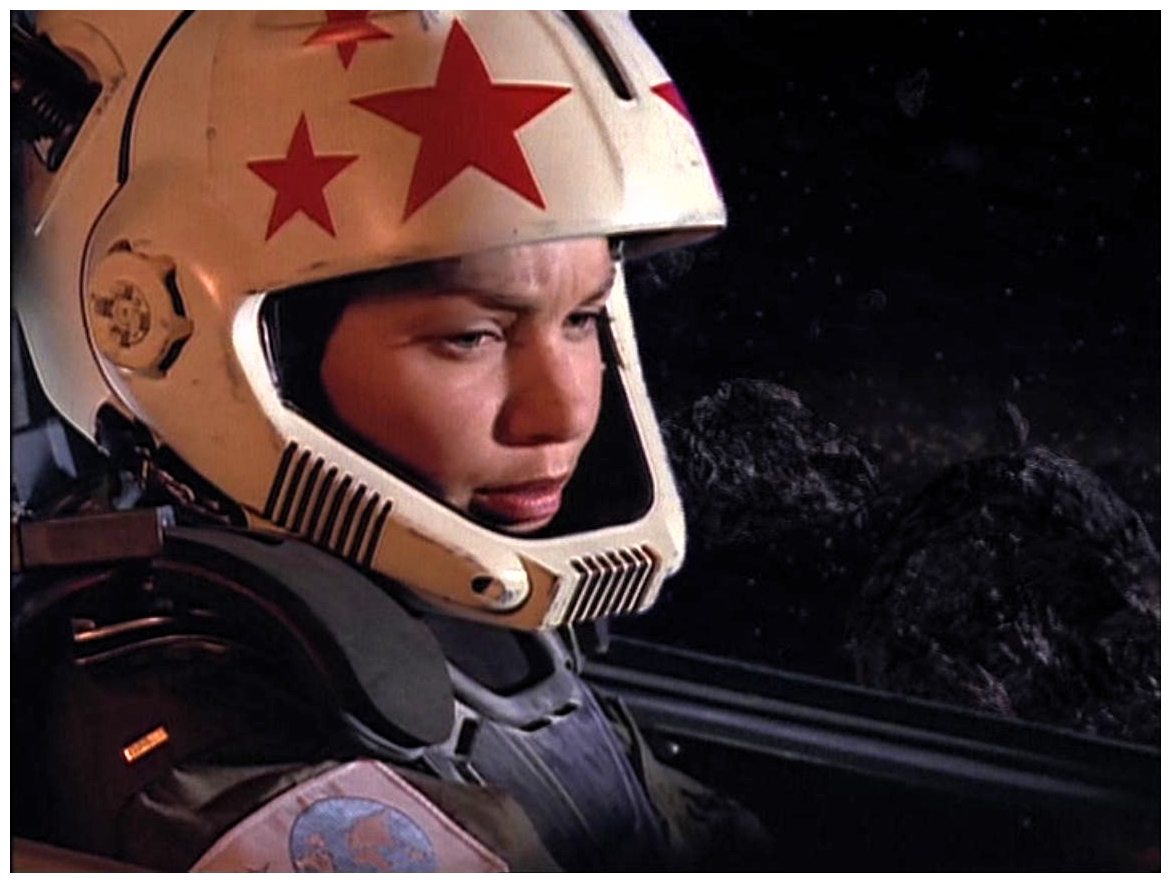 Mulder and Scully in The X-Files were given time to develop into thoughtful mature grownups whose brooding had its own gravity – they could stare into space without appearing to be whiny or self-centred. Part of the Space: A&B’s characters’ very nature is their impulsive troublemaking quality but, given that, it’s asking a lot for us to believe that highly trained space marines would get into a scuffle in pressure suits on Mars and start butting helmets together, or that rookie marines would be sent on a training mission to the red planet during wartime without a commanding officer in charge. This is the stuff of classic science fiction literature and Star Wars-style space battles, but the adult sobriety of Space: A&B was unable to handle its own reckless hormone-rattled heroes. While you contemplate the twisted machinations of Fox executives and the pleasure they seem to get from cancelling good shows, I’ll politely invite you to meet me here again next week on Horror News when I’ll have another opportunity to inflict a pain beyond pain, an agony so intense it shocks the mind into instant mashed potato! Toodles! 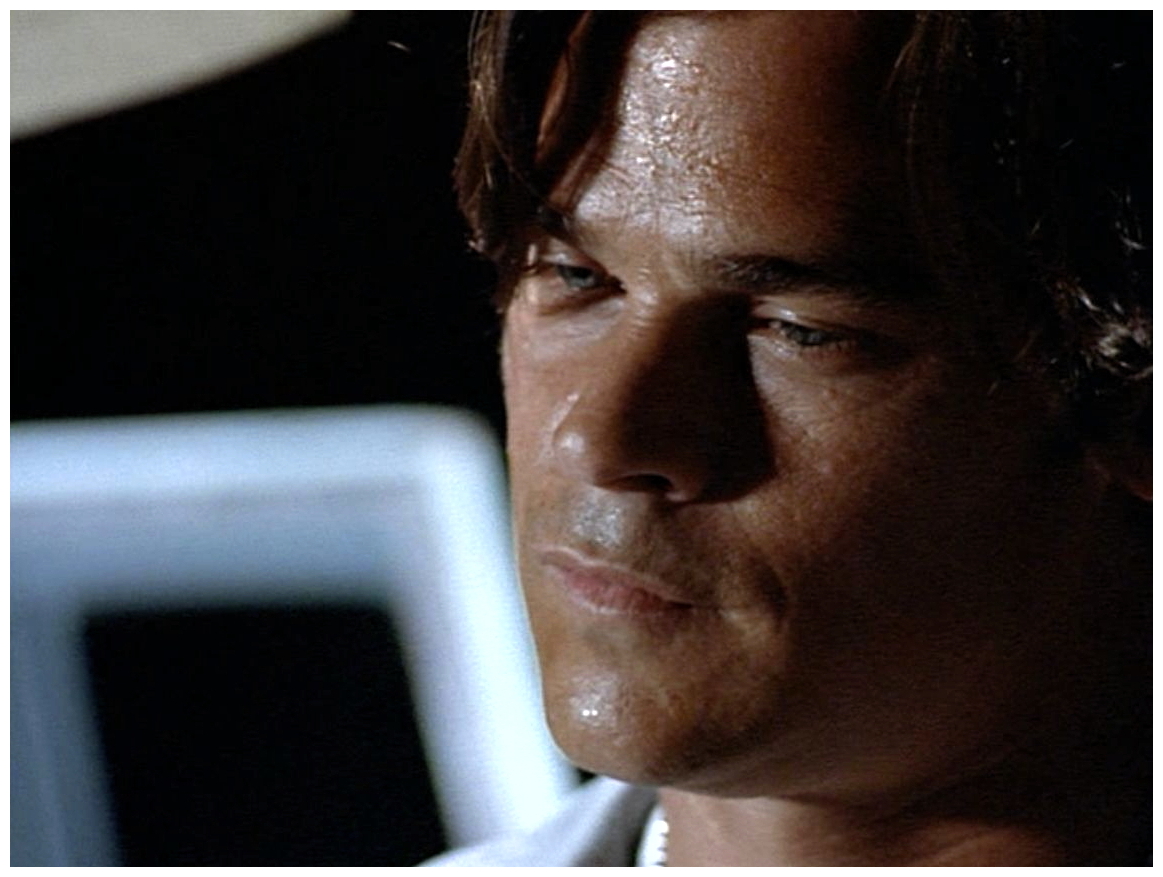