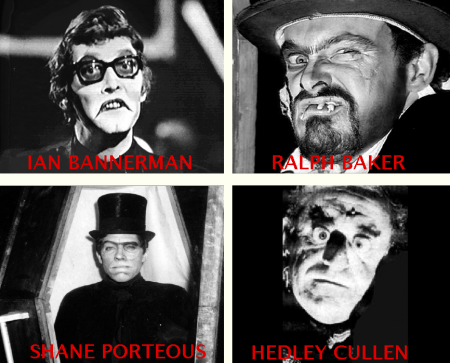 Deadly Earnest was a late-night horror host active on Australian television from 1966 to 1972. Broadcast weekly on the 0-10 Network, Deadly Earnest’s Aweful Movies featured mainly B-grade horror films introduced by Australian celebrity Ian Bannerman. Following Bannerman’s tongue-in-cheek characterisation, the program was notorious for showing the absolute dross of supernaturally-themed cinema, even going so far as to present the Worst Movie Of The Year on at least one occasion. While the character was originated by Bannerman, the idea was evidently so successful that local variants soon turned up in Melbourne, Brisbane, and Adelaide.

Varying widely in appearance and personality, each version took a vaguely sardonic approach to the subject matter, frequently ridiculing whatever film he happened to be hosting. The show was popular with student audiences, who apparently tuned in more for the commentaries than for the actual movies, which were little short of atrocious (sincere thanks to Wikipedia, IMDB, The Horror Host Underground, and especially actors Ralph Baker and Shane Porteous for certain information). 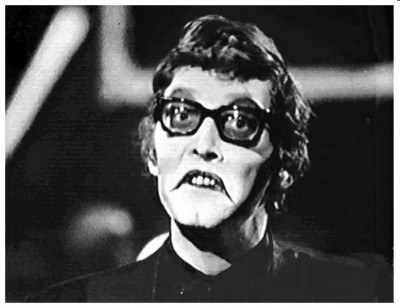 IAN BANNERMAN in particular was notable for his dry wit, withering ad-libs and black humour parodies of contemporary advertisements. Billed as The Dead-Pan Ghoul, Bannerman’s Deadly resembled an undead 1960s ‘mod’ complete with sideburns and horn-rimmed glasses. In addition to Bannerman’s solo appearances, Deadly Earnest was sometimes accompanied by two ghoulish assistants during commercial breaks – possibly members of Bannerman’s sideline band, The Grave Situation. Although the character’s occupation was never specified, the show’s opening sequence suggested he was some kind of zombified undertaker (as suggested by his wheeling a casket through the studio’s darkened corridors).

While the majority of films featured on Deadly Earnest’s Aweful Movies were stereotypical American schlock, a smattering of British, European and Japanese productions were thrown in every so often for good measure. Genre was not restricted exclusively to horror, but included science fiction, suspense, mystery and even the odd matinee serial dredged up from the forties. The chief unifying element was the consistently poor quality of the material – the deliberately mis-spelled term ‘Aweful Movie’ could often be applied in more than one sense – which was, evidently, part of the show’s appeal. Little else is known of Bannerman, who is believed to be dead. 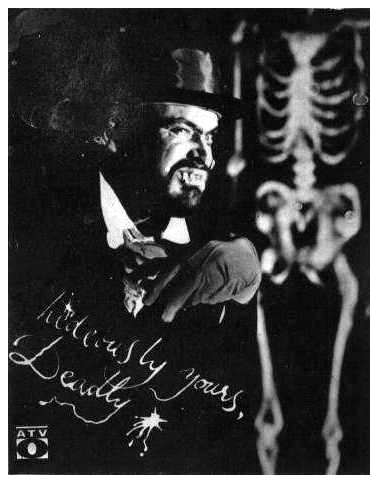 RALPH BAKER played the role of Deadly Earnest in true Gothic style on ATV-0 Melbourne. Taking on the role after moving to Channel 0 from GTV-9, Ralph had previously worked in the props department as well as appearing in comedy sketches on the original In Melbourne Tonight with Graham Kennedy. Melbourne’s Deadly occasionally evidenced a wayward, willful foot called ‘Hoof’ trying to lead him in directions he didn’t want to go. As for ‘Claw’, one night Deadly had had enough of his shenanigans and nailed him to the table. In 1969, a guest appearance was made by Deadly Earnest in the ATV-O comedy series Good Morning Mister Doubleday in the episode entitled A Sidecar Named Desire.

Ralph was originally Assistant Producer on the series, eventually becoming producer. Deadly also presented The Outer Limits in 1972, in the earlier time slot of 7.30pm. A waxwork of Deadly was created in the seventies by the London Wax Museum in Saint Kilda, opposite Melbourne Luna Park. After that closed, it moved to Echuca. Echuca has now closed too, but I tracked the wax Deadly down to the Gold Coast Wax Museum in Queensland – but they can’t locate the Queensland Deadly! If you’re planning visit, check first to make sure Deadly is on display. 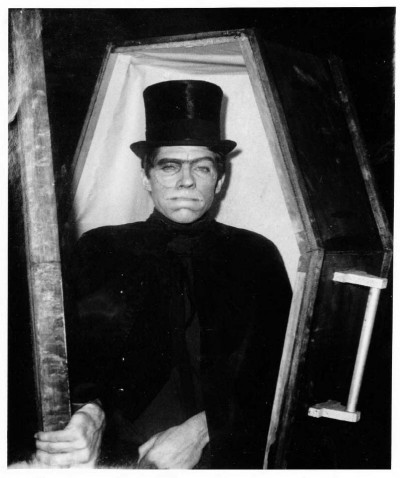 SHANE PORTEOUS brought Deadly Earnest to the tropics. Yes, this is the same gentleman who starred in the long-running soapie A Country Practice as Doctor Elliot. And you thought he was such a nice doctor, but just like Doctor Jekyll, he could turn into a Mister Hyde! Shane kept the Deadly tradition alive, by killing off characters in Neighbours. I recently spoke to Shane: “I fear our Brisbane Deadly Earnest intros were a pale shadow of the ones in the southern states (we called them Frightful Movies, with all that that implies).

For a start we had a budget of zero. The only set/prop I can remember having was the coffin I emerged from. And occasionally the studio grand piano on which the late great Wilbur Kentwell would play a few spooky chords or a spoof of a popular song.

Channel 0 Brisbane couldn’t afford the time to show me the movie I was hosting beforehand and often I didn’t even have a one-line synopsis to base an intro on. And I never once saw the show back to air because I was performing in theatre restaurant on Friday nights. Somewhere I do have an old black-and-white shot (not very good) of me in costume and makeup as Deadly Earnest – I’ll try to find it. A couple of years ago I did a radio interview with a Melbourne station about Deadly Earnest and spoke with Ralph Baker. That’s the only time I’ve ever ‘met’ any of the other Deadlys. I found the only pictures I have of Deadly Earnest. The bottom one was his ‘birth’.

The top one was his ‘death’ when the Frightful Movies were taken over by Professor MacAbre (the late John Dommett who went on to be one of the original cast of The Young Doctors). The reason? I moved from Brisbane to Sydney to become a full-time professional stage actor.” Only two images of Shane Porteous as Deadly Earnest is known to exist. 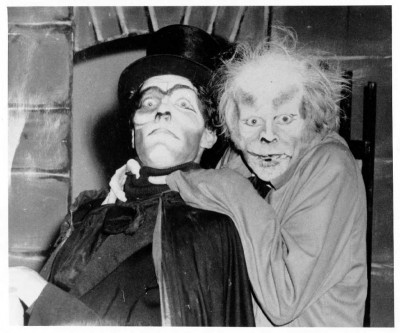 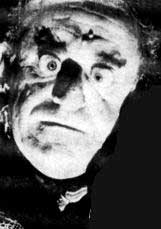 HEDLEY CULLEN was seen as Deadly Earnest in Adelaide on Friday nights from 8.30pm. The character would rise from his coffin to introduce the movies and his echoing laughter would lead into the opening of the movie. At the end of the movie (or sometimes during the movie) Deadly Earnest and his sidekick (a skull called Yorick) would show drawings sent in by viewers or announce competitions. Many of the movies were those classic B-grade American International films such as Panic In The Year Zero (1962), the Japanese Godzilla and Mothra movies and the British Hammer horrors.

Others included The Omega Man (1971), The Last Man On Earth (1963), and Planet Of The Apes (1968). Some of the American International films, especially the black-and-white ones, were hardly seen on Australian television until I started hosting The Schlocky Horror Picture Show in 2007. Hedley Cullen passed away in 1994 and no footage was known to exist of him as Deadly Earnest until SAS-7 (formerly SAS-10) celebrated its 40th anniversary in 2005 when three clips were discovered while researching a television special. 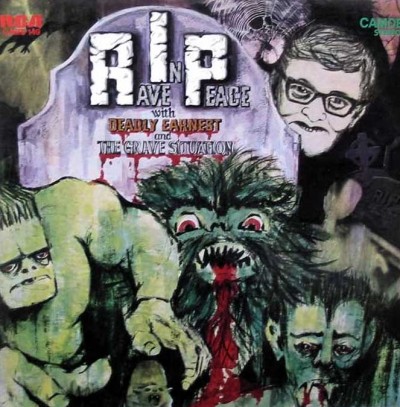 Please join me next week when I have the opportunity to present you with more unthinkable realities and unbelievable factoids of the darkest days of cinema, exposing the most daring shriek-and-shudder shock sensations to ever be found in the steaming cesspit known as…Horror News! Toodles!