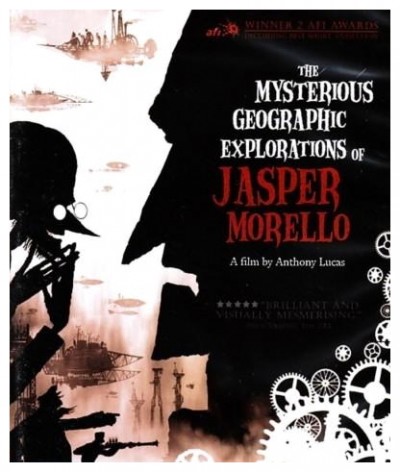 “Set in a world of iron dirigibles and steam powered computers, this Gothic horror mystery tells the story of Jasper Morello, a disgraced aerial navigator who flees his Plague-ridden home on a desperate voyage to redeem himself. The chance discovery of an abandoned dirigible leads Jasper through uncharted waters to an island on which lives a terrifying creature that may be the cure for the Plague. The journey back to civilisation is filled with horrors but in a shocking climax, Jasper discovers that the greatest horror of all lies within man himself.” (courtesy IMDB)

Anthony Lucas‘s short films have been in competition at Cannes, BAFTA and Annecy. With his production company, 3D Films, he has animated numerous television commercials, children’s shows and a series of national promos for SBS Television Australia. The Mysterious Geographic Explorations Of Jasper Morello (2005) is his fifteenth short film, which premiered at the Annecy International Film Festival where it won the Grand Prix. Since then it has received awards at the Palm Springs Film Festival and the Worldwide Short Film Festival in Toronto, and the prestigious 50th Anniversary Prize at Valladolid in Spain. Within Australia, the 26-minute film scooped the animation pool with two Australian Film Institute awards, an Inside Film award, and Flickerfest’s award for Best Animated Short. 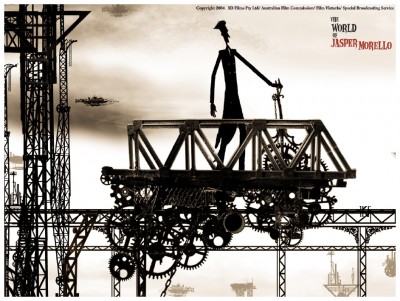 From the first sepia-toned images of a smokey cityscape through which industrial-chic ironclads glide, you know you’re seeing something special. Silhouetted characters, at once both reminiscent of Victorian daguerreotypes and Indonesian shadow puppets, manage to be exaggerated without being cartoonish, and the whole Jules Verne-inspired atmosphere evokes not only the aesthetic of the Industrial Revolution but also a fantasy world of floating islands, flying fish and other strange creatures. 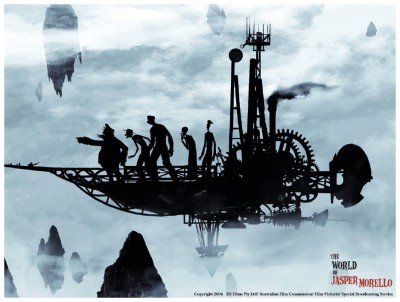 What is the one word that Anthony Lucas uses to describe his animated universe known as Shadowlands, a Steampunk-style world raked by bone-chilling winds? “Repression. Poor Jasper leaves his home to escape disease, and doesn’t even get to kiss his loved one goodbye when he takes off. It’s all about sublimation.” The character of Jasper Morello (Joel Edgerton) is a conflicted navigator who encounters a strange unexplored world, and is the beneficiary of the animator’s unique ‘silhouette technique’ in which stop-motion characters come to life as lurching black shadows in a largely computer-generated world. 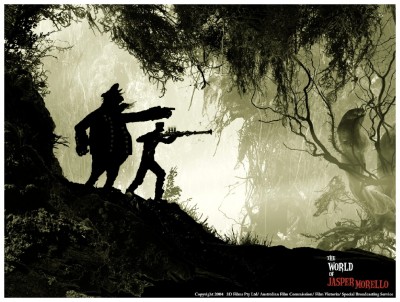 Lucas dismisses claims of innovation, pointing to the centuries of tradition that he’s inherited. “Silhouettes are as old as images, basically. Photographs were originally silhouettes, but I suppose I have created a new way of doing it, sure.” The most amazing thing is that his technique works at all. Characters with no visible expression would normally send audiences into the world of nod. “You’re right, it should be boring, but I think it intrigues people for the simple reason that they’re trying to decode the image. I once heard an interesting thing – that radio is a hot medium and TV is a cold medium. Radio stimulates the imagination and forces you to visualise what you’re hearing. TV can actually turn the mind off. The whole notion of this silhouette is to make you hunt for clues. I’m going to make two more half-hour episodes and then, hopefully, a feature. If Joel Edgerton will continue to have me, there is no-one in the world I want more for Jasper’s voice.” 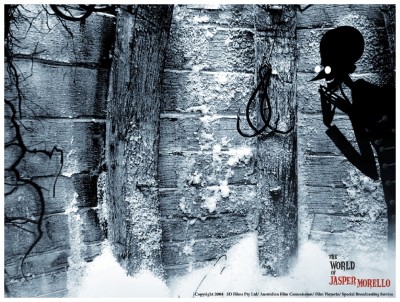 The same year as The Mysterious Geographic Explorations Of Jasper Morello, actor Joel Edgerton appeared in the British comedy Kinky Boots (2005), and had a significant role in Smokin’ Aces (2006). He can be found in such films as Erskineville Kings (1999), Ned Kelly (2003), King Arthur (2004) and, perhaps most famously, Star Wars II: Attack Of The Clones (2002) and Star Wars III: Revenge Of The Sith (2005), as young Owen Lars, stepbrother of Anakin Skywalker and uncle to Luke Skywalker. Most recently Joel had a major role in the critically acclaimed fight film Warrior (2011) in which he plays son to Nick Nolte and brother to Tom Hardy and, in The Thing (2011) prequel, he can be seen as helicopter pilot Sam Carter.

You can view The Mysterious Geographic Explorations Of Jasper Morello on Youtube at www.youtube.com/watch?v=vORsKyopHyM and, if you like what you see, you can find the film available on several different DVDs. I originally found it as part of Wholphin DVD Magazine #2 – www.wholphindvd.com/issues/wholphin-no-2/ otherwise you can seek out the DVD of the silent Russian classic Man With A Movie Camera (1929), or simply head for the official website at www.jaspermorello.com/gazette/ for more information. I’m sure you’ll agree that this is one of the very best animated short films ever made and, having been proven right again, I’ll take my leave of you, trusting to see you again next week after I have scoured the depths of Short-Filmdom to find another gem worthy of discussion for…Horror News! Toodles! 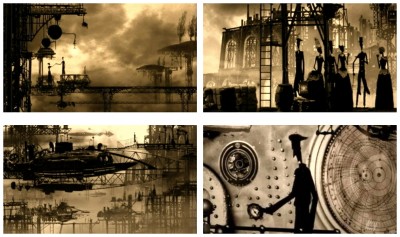