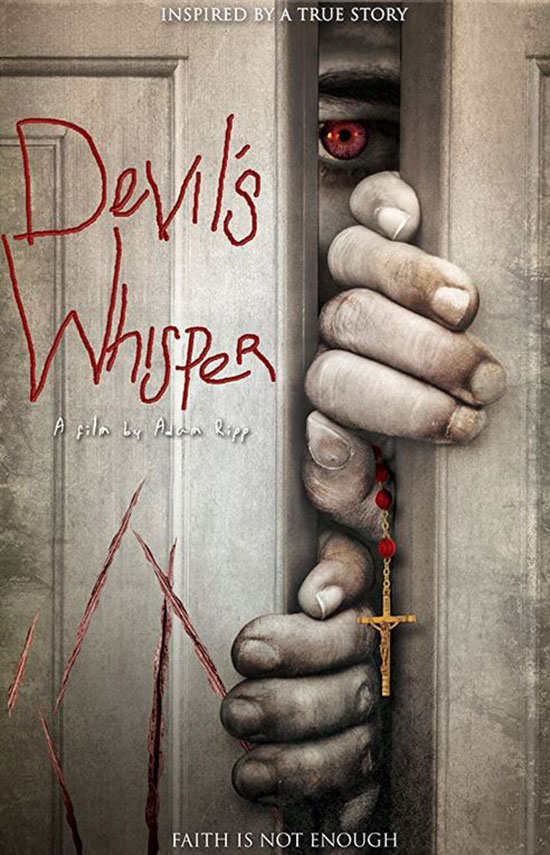 15 year-old Alejandro Duran, who comes from a religious Latino family, aspires to one day be a Catholic priest. But when Alex discovers a mysterious box he unwittingly unleashes a demonic spirit bent on possessing him. Alex must find a way to defeat this ancient demon, which has been tormenting children since the dawn of man, before it destroys him and everyone he loves. On the surface Devil’s Whisper is a supernatural horror film about demonic possession but at its core it’s a psychological thriller about repressed memories, childhood trauma and the cycle of abuse.

“Devil’s Whisper” is, at its heart, a film about religion, faith, and the long toxic reach of abuse within a family. The film poses questions about the nature and existence of evil and how each person deals with it through personal strength and faith.

A young man who wants to be a priest is about to go through his religious confirmation. At the same time, some items from his recently-deceased grandmother’s home arrive for storage. He finds a box with no openings in a hidden compartment in his grandmother’s armoire, yet he hears something rattling inside. 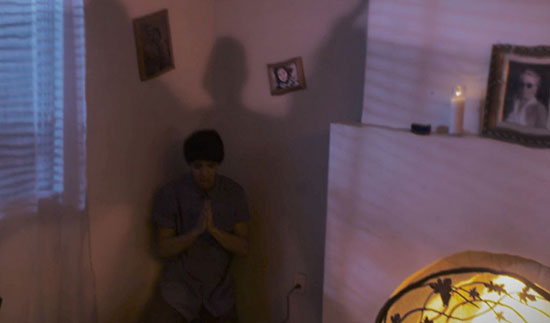 Alex and his father attempt to open the unusual box. The container shatters, and we are given hints to indicate that something was released when the box crumbles. Inside the remains of the box, the young man finds a crucifix. The father allows the son to keep the cross as his confirmation gift from his late grandparents.

At this point, we are given information that sets the course for the rest of the film. It deals with abuse that was committed by the grandfather on our main character when he was only 4 and 5 years old. Alex has repressed the memories of the abuse, and has shown no indication of side effects after the abuse stopped. Apparently, the crucifix belonged to the grandfather.

Before long, our main character is acting strange and is seeing a mostly featureless being lurking in the shadows. Is it possession that is changing our normally calm and respectable young hero? Is he being haunted by a demon? Can repressed memories take form and sow distrust and anger?

“Devil’s Whisper” asks more questions than most modern horror films in recent history. What is evil? Is it something we carry inside, or is it something outside ourselves that influences us? Is evil genetic? Are the sins of the fathers (or grandfathers) visited upon the son? Is abuse a cycle that endlessly repeats?

These questions are the fine seasoning added to what is a fairly simple film. You get some of the standard possession film tropes. You get a few bloodless kills to keep the “action” going for modern film-goers. You get a showdown between good and evil. You expect those things and the film offers them up as little more than a framework to hang the rest of the film.

The film focuses on the hero’s family. They are an average Hispanic family of moderate means. They are not wild and crazy characters all trying to steal the limelight. For once, we are given a family that almost seems real. Religion is an important part of their lives and their culture, and the depth of involvement in their religion and faith provides the multiple points of view into the changes Alex goes through.

The parents don’t start out fearing for their child’s immortal soul. They think something has triggered his repressed memories of his grandfather. They watch as Alex slowly descends into a mass of conflicting urges. They want to figure out what is happening. They lean on their faith to protect them and their children from the changes they anticipate. They even give into their very human anger as their son’s actions become more erratic and abusive.

A very human priest, who is a family friend, recognizes the changes in Alex. The priest served in combat during the recent conflicts, and he deals with repressed traumas and PTSD. He feels a bit of kinship with Alex. However, he is the first to seriously wonder if the change in the young man is emotional or due to the presence of something demonic. In essence, do demons influence us or do we create demons with our traumas? More questions.

Before it sounds as though the film is nothing but questions and no story, rest assured that you do get a very simple story that has an ending that can be viewed from at least three angles, and each provides a very definite ending with their own unnerving implications. You do get the character development and the story progression that brings both to a rather uncomfortable climax that involves an innocent character. Yes, you get a fully fleshed out story.

You also get a few strong performances to anchor the film. Luca Oriel plays Alex, the troubled young man at the center of the film. He works with an arch of an eyebrow or a hint of a smirk to show that there is more going on than others think. As the possession deepens, the only makeup is there to make him look haggard from stress, fear, and lack of sleep as he fights to keep demons, both inside and outside, at bay. Father Cutler is played by Rick Ravanello, who brings a touch of active humanity to the priest while respecting the order of the Catholic Church. He gets to shine in a scene during which a prayer in the church goes astray in a frightening direction.

But, oh, the various lines of thought and discussion the film can inspire make the film so interesting and worth repeat viewings. Days later, the questions linger and the images remain. That is what a good horror film can do. Many thanks to director Adam Ripp and his entire cast and crew for making the effort and succeeding.