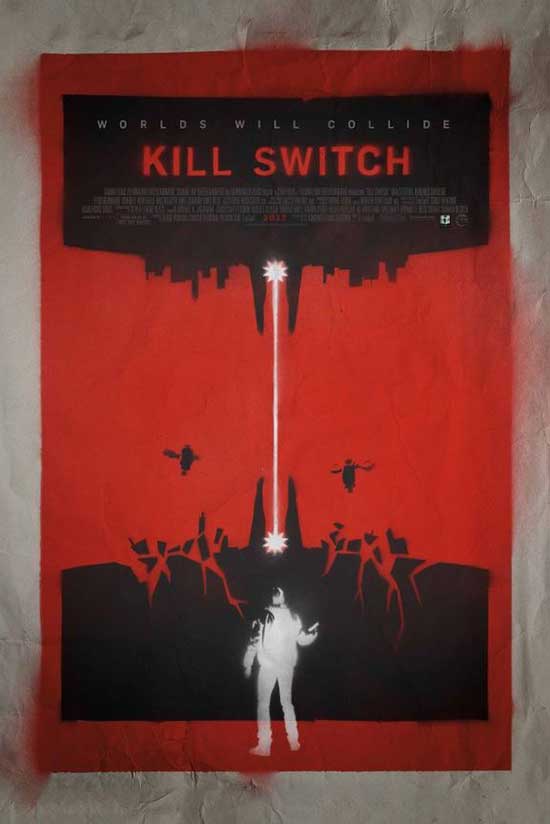 A pilot battles to save his family—and the planet—after an experiment for unlimited energy goes wrong.

Kill Switch is a video-game inspired expansion/re-imagining of director Tim Smit’s short film from 2009 entitled What’s In The Box? While that short garnered huge interest due to its alluded connection with the legendary Half-Life video game series, Kill Switch claims its own identity by building a world separate from any existing sci-fi franchise. With game-style first person perspective segments and a near-future alternate reality, Kill Switch is an engaging, though somewhat shallow, experience that’s worth the 91-minute runtime.

The film opens with a traditionally-filmed segment, where pilot and scientist Will Porter (Dan Stevens, Colossal, Beauty and the Beast 2017) and his widowed sister Mia (Charity Wakefield, Wolf Hall, A Midsummer Night’s Dream 2017), along with her young boy Donny (Kasper van Groesen, The Zig Zag Kid), watch a giant power plant of the future light up near their home. The plant, created by Will’s mysterious employer, promises endless energy by converting the mass from a carbon-copied reality (minus the life) into usable power. Something goes wrong, however, and Will suddenly awakens wearing a power suit in a world gone made. It’s up to him to navigate its hostile forces, and find the purpose of the little black box he holds in his hands.

While the prospect of first person perspective can make those who suffer from motion-sickness go running, Kill Switch features smart cinematography and a high production value for an indie effort (note the US release by Power Rangers production company Saban as proof), so nothing feels overly shaky or abrupt. If anything, the first person moments are a little less mobile-feeling than those in modern video games (such as Bethesda’s 2017 game Prey, which features a similar tone). Still, the wide field of view and unobstructed portrayal of events on the screen is a pleasing experience that feels fresh.

The only times the FPP scenes—which make up the majority of the film—falter is when they become too video game inspired, such as when the audience watches Will mow down flying sentry robots that simply wait for their doom. This wouldn’t be an issue in an actual game, where the player is doing the firing, but in a theater environment, it is a little overlong. The crash scenes, however, and dramatic ending moments, are very satisfying, and show that there’s definite cinematic merit in the first person perspective. The plot of Kill Switch is moderately engaging, as well, and the ultimate reveal makes sense, even if it’s not a dramatic Aha! Moment.

The acting in Kill Switch is solidly above the average direct-to-video fare, with Dan Stevens effectively emoting with just his voice for most of the film. Wakefield does fine, but her character comes across as overly demanding of her helpful brother, despite stating she wants to be otherwise, making it hard to identify with her. Groesen doesn’t have much of a chance to play his part, and his character’s mental disorder seems an unnecessary complication. Were his role expanded, perhaps it would have been worth it to have another portrayal of differently abled individuals on screen, but this doesn’t come to be.

Bérénice Marlohe (Skyfall, Revolt 2017), who plays Will’s employer’s right hand, gives a solid performance in the second half of the film, but her initial scenes seem overly sexualized, given the actual role and impact of her character by the end. The coyness that director Smit seems to push her towards in the beginning had me shouting “Spit it out, already!” Luckily, that act is dropped shortly into the movie, after which Marlohe does well, especially in her last few lines. Tygo Gernandt, who plays Will’s guide throughout the film, gives a serviceable performance as well, and doesn’t overpower the lead, even though the latter is only a voice 90% of the time. Gijs Scholten van Aschat (The Pool 2014, War Machine 2017) plays Reynard, the mastermind of the energy machine, and his role is both minor and unimportant, though he delivers his lines with experience and presence. The weakest performance is from Mike Libanon (Wasted!, My Dad’s a Detective), who plays a radical environmentalist ready to take violent measures against the new energy plant. He’s referenced several times, but when he finally comes on screen, his overly aggressive presentation makes him seem dumb rather than powerful; this may be the fault of direction, or perhaps was a vain attempt to put more oomph into a role that could only offer so much.

Despite being chock-full of ancillary characters than don’t have any real function, the slick presentation, solid acting, and moderately engaging plotline make Kill Switch worth a watch. While it may not leave a huge impression on you (especially if you’ve watched Doom or Hardcore Henry already), it won’t bore you, either, and that’s high praise in today’s flooded direct-to-video market.