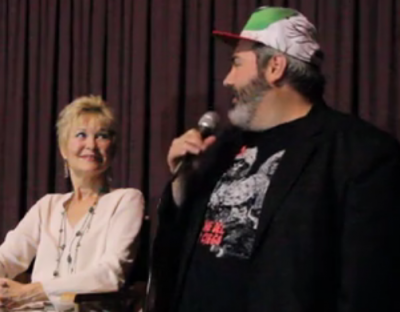 Horrornews.net  and Artsploitation Films present a very special live Q&A with scream queen, Dee Wallace (Cujo, The Howling) after the premiere of her new holiday horror movie, Red Christmas.   She’s joined on stage by Justin Cook and Director of Red Christmas, Craig Anderson.   This was recorded live at the Laemmle Music Hall in Beverly Hills, California.

A mother must protect her family on Christmas Day from a demented stranger who is hell-bent on tearing them apart.

Artsploitation Films is a Philadelphia, Pa based distribution company that’s making a global impact, featuring a catalog of movies from around the world including Australia, Germany, South Korea, Lithuania, Slovenia, Spain, France, Chile, Argentina, Brazil, and the United States.
They are not your average distributor, as they are committed to bringing their audience the most intriguing, unsettling, unpredictable and provocative films around. You don’t just watch Artsploitation Films, you experience them!