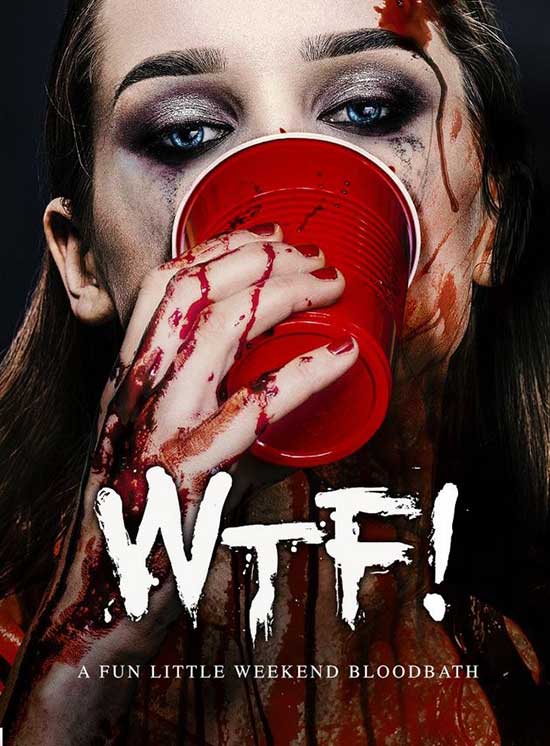 Three years ago, twenty-two year old “girl-next door” Rachel barely survived a brutal massacre that left all of her friends murdered. Time has passed, and Rachel has moved on, but unfortunately her close friends are spending Spring Break in a secluded house in the woods, and they have cordially invited her to join. She would never have accepted the invitation if she realized that another bloodbath would be showing up as plus one. Once Rachel and her friends arrive at the cabin, the partying, sex, and…terror begins. From girls’ only pillow fights to debauchery in a bedroom, it’s going to be a blast…aside from the stabbing, flesh melting, and castration. Seven friends will go into a secluded house for the best Spring Break of their lives, but only one will be alive to post about it on Facebook the next week, as Rachel’s biggest fears become a reality once again! Can Rachel survive another bloody massacre?

From Cthulhu Crush Productions directed by Peter Herro, comes a new young adult horror thriller appropriately titled: “WTF!“. We were really glad they chose an acronym (as otherwise we wouldn’t have been able to review it). Much is the style of Friday 13th-esque films, “Cabin Fever”, and yes even the genre bending “Cabin in the eWoods”, “WTF! is chock full of bloodshed, killing and party, sex atmosphere. 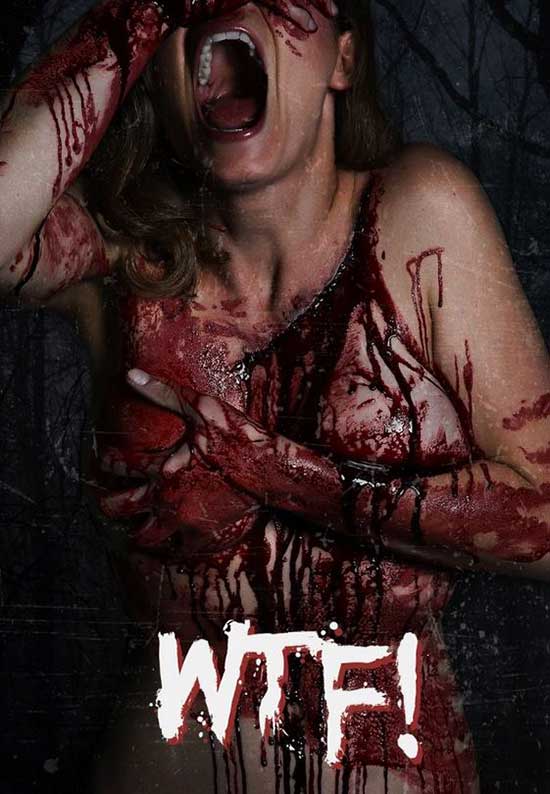 A group of college students (I really hope they weren’t supposed to be high school as they all looked easily 20+) have decided that a cabin outing in the woods would be the best choice for their much anticipated Spring break vacation. WTF! takes its time developing our main players so that we are well familiar with their attitudes, peculiarities, and sexual activities. I would say it’s all well written to particularly play to a common formula. Rachel (Callie Ott) is the shyer one who has supposedly been thru a massacre in the woods 3 years ago. We are told by flashbacks that give us a bit of the aftermath and carnage she experienced. Needless to say she survived that one. Hmm….. 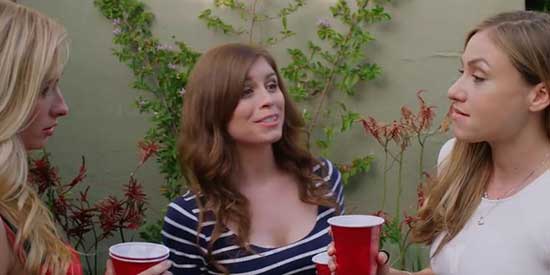 Andrea Hunt plays Bonnie with Sarah Agor playing the role of Lisa. In addition to their sexy but strong female roles, the group is made up of a number of sexual starved young males who came to party, get laid, and generally just have fun in the get-together aspect of the situation (stop me if you’ve heard that before).

Now if you think they didn’t all stop midway to greet the local store owner who had some advice, then you just haven’t seen enough of these films. You betcha! You could almost match the “Cabin in the Woods” script to WTF! at least in the first act. I won’t bother naming all the men characters/players of this film, but WTF does have a bride part for Perez Hilton (noted Hollywood blogger) as Donnie in the interim. The part is so brief that really his only contribution for this film is the addition of his name. But hey, that’s fine. 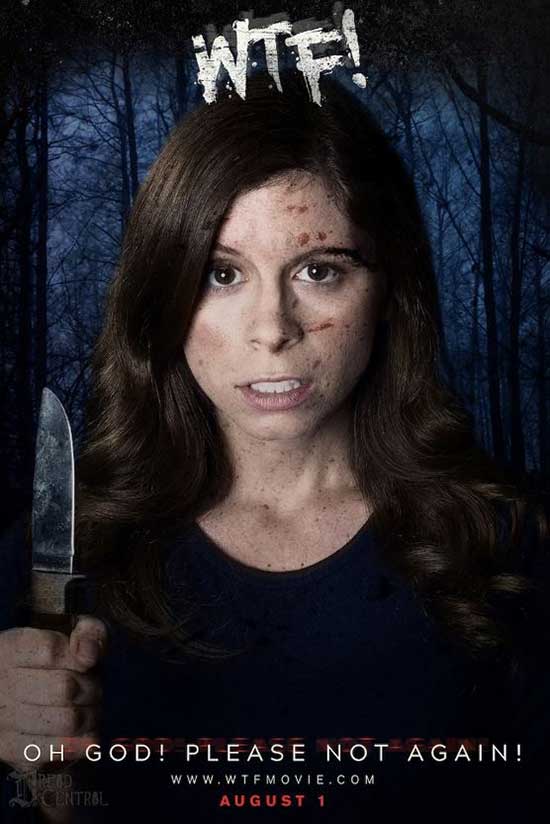 The premise does its best to set the usual tone of “which douche bags need to die” and which ones will probably come out ahead due to not having their heads buried in the clouds. It’s a simple idea that simply works. As an audience it doesn’t take long to form opinions on which ones we like and don’t moving forward. 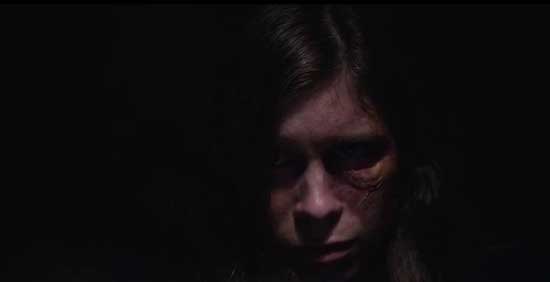 As a horror reviewer, I have seen my share of these similar setups arrive almost monthly in my in box. I tend to grade these films on a few things: production value, acting, visceral madness, and story flow. We’ll ignore the “formula-driven aspect and just go with the other elements here.

Production, filming and edits are spot on. It’s a pro production that is well paced, well rehearsed, and full of the “right players for this ensemble. Void of really any name actors to carry the bill, this group does just fine. The collective group scenario rolls thru an emotional whirlwind of love, friendship, hate and murder as it soon becomes clear that someone is intent on killing off each one of them in a justified horrifics way. The hysteria aspect of this film is a reason to enjoy it through the pure aspect of sometimes overacting and other times predicable wrong choices. Though you feel as if the film is also having fun with at aspect as it rolls along. Viewers who like “Scream” will feel at home with this one. The target market here is pretty clear from the get go fashioning a young nubile string of players to provide enough eye candy for both sides. As yes, if you were wondering, there is a obligary nude swimming segment added just for you to feel like you’ve gotten your money’s worth. 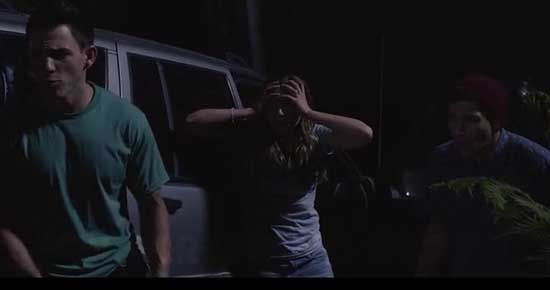 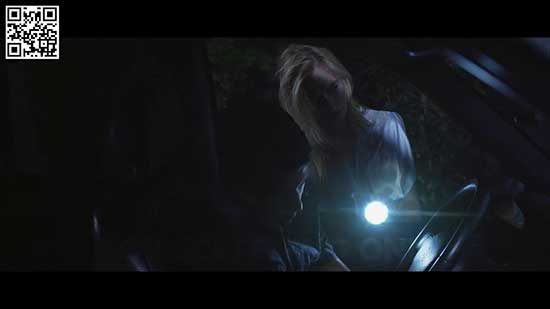 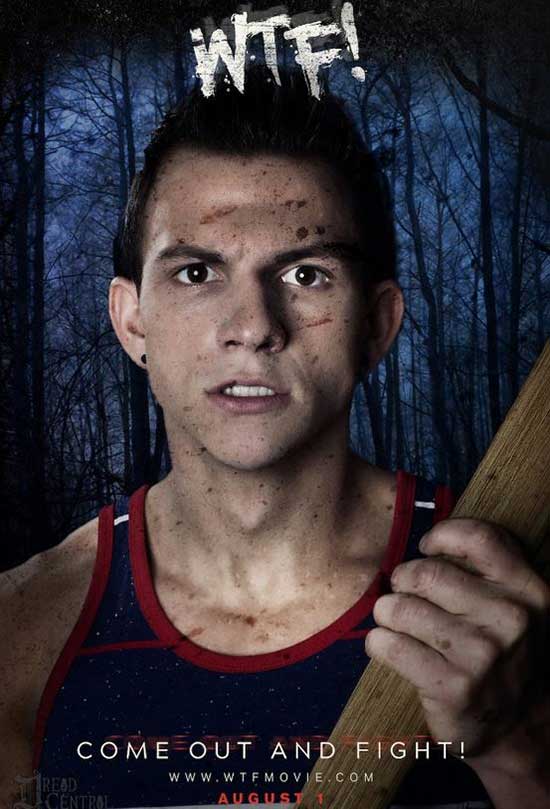 WTF! may not win any innovation awards, however it does manage to throw in a few surprises and make the predictable plenty predictable enough to become “almost” a parody of itself. The production team did a great job at creating a film primarily designed for the younger markets. The horror is not over-done and manages to keep things entertaining. If that’s your bag, then jump right into this one!