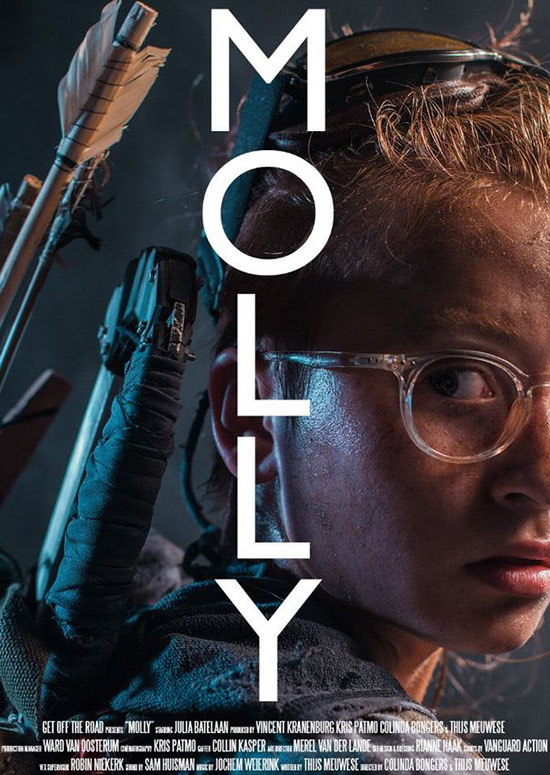 A girl living alone in a post apocalyptic wasteland finds herself hunted down by marauders who want her to fight in their fighting pit for their entertainment.

Since the days when Sigourney Weaver climbed into a giant robot exo-skeleton to fend off the mother of all Xenomorphs in Ridley Scott’s 1979 Alien and Jaime Lee Curtis decided to attack Michael Myers with a clothes hanger, women in horror and fantasy have morphed from the hysterical, stumbling archetypes that long became a groaning joke for genre fans to the epitome of butt-kicking resilience and strength today. I’d take it back even to the days of Audrey Hepburn forced to fight for her own life (and finding an inner strength along the way) in 1967’s Wait Until Dark against the likes of a psychotic Alan Arkin. Strength isn’t always depicted by musculature. It goes deep into self in terms of deep survival instincts and something of the primal rage at being pushed around too much. Much of this is on display in full natural light in Molly, a post-apocalypse slugfest from the Netherlands by co-directors Colinda Bongers and Thijs Meuwese, Get off the Road Productions and Artsploitation Films. 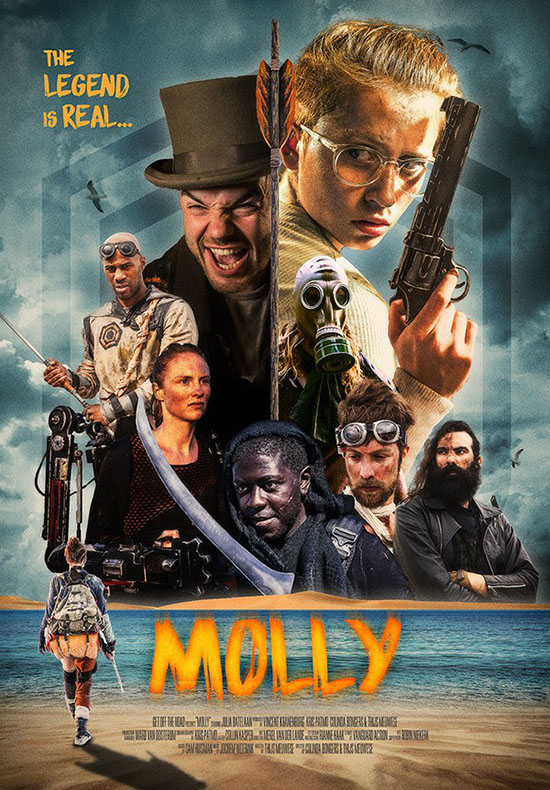 A catastrophic event of some kind has devastated Earth and pocket groups of humans are left to squabble over what resources remain. A mysterious drug has turned some into near zombie types called Supplicants. This means that these drooling savages can be exploited by non-affected opportunists for fight game profits. One such sleazy, greedy type named Deacon, learns of a girl with superpowers who could earn him a fortune in the cage. He sends his lackeys out capture her, leading to problems and an exceedingly high body count. 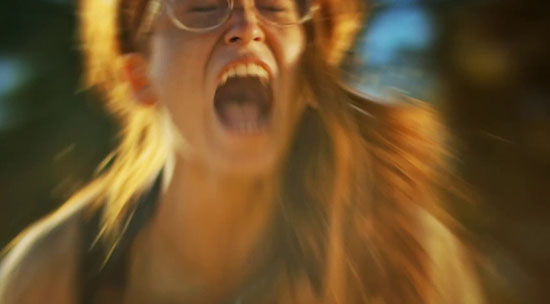 The tropes are easy to spot for anyone who grew up on George Miller and the Mad Max trilogy of the late 70s and early 80s. Even fans of the 2015 Tom Hardy reboot might recognize something familiar about the plot of Molly. The desolate landscape, humanity de-evolving down to the Lord of the Flies tribal level of survival of the fittest, the reluctant hero who may be a key to a level of salvation. I guess where there is little hope for a future the descent into drugs, despair and savagery is deemed inevitable. Bullets are the priceless currency here, being in much the short supply. Not surprising, as a great deal of the history of earth is seeped in gun violence. Once a total cataclysm occurs, the instinct for most would be to reach for their automatics and rifles for protection with something more of a lack of inhibition to fire at that point. The manufactured bullet becomes threatened with extinction the minute production stops. The idea of bullets in short supply suitably allows for the more kinetic physical fight and primeval weapons to be used, such as the bow and arrow. Characters are forced to reach for the tried and true methods of the past when the modern technology fails to protect them. 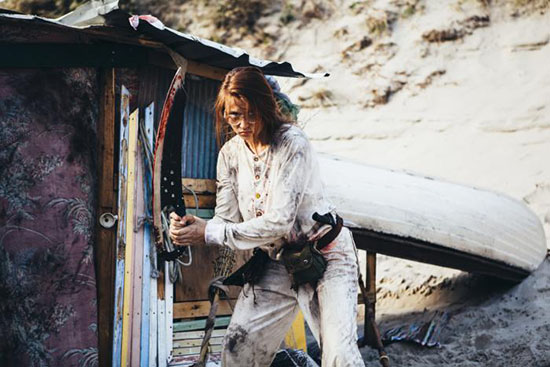 I have to admit that the predictability of the story threatened to become a tiresome drain for me. I generally look for the unique, never done before angle of a script on viewing new films in a genre. Maybe this is the shading of a jaded film fan obstructing me from seeing any freshness. In fairness, it was refreshing to see the protagonist be a woman in what is still these years later a testosterone-fueled milieu mostly. In a certain sense, Molly is barely adult and near-completely fractured at that. It’s never quite explained where her determination comes from. You have to really just read the bits and pieces from her body language and reactions (and a few flashbacks to her being a captive patient in some facility for experimentation) to get what is driving Molly to beat back her attackers time after time. 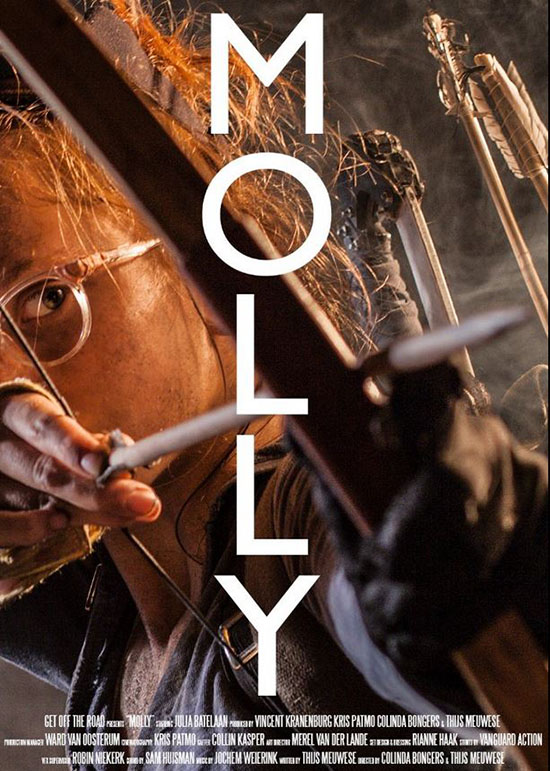 Directors Colinda Bongers and Thijs Meuwese should be commended for dressing the formula as brightly and realistically as possible for a $310,000 estimated budget. The natural lighting is a welcome reprieve in this age of dark is better for fantasy and horror. Now, a film critic ala Pauline Kael might suggest that the brightness is some subtextual tool to illuminate the despair in the story’s environment. To me, it just looks vibrant and faintly lush. Kudos also to the pair, with stunt coordinator Ticho Welschen, in creating a series of truly bone-rattling, brutal fight sequences that help propel the action at fever pace. It’s not easy to leave me with a reaction that is a combo of wincing and breathless considering the years of experience I’ve accumulated in seeing the action film, but the trio managed it. And more than once. The old adage of using the action setpiece as blocking wall to cover the plot holes is on full display here. That the company had access to sumptuous locations for filming, such as Terschelling, Friesland in the Netherlands and made full use of them is just an added visual benefit to the project. 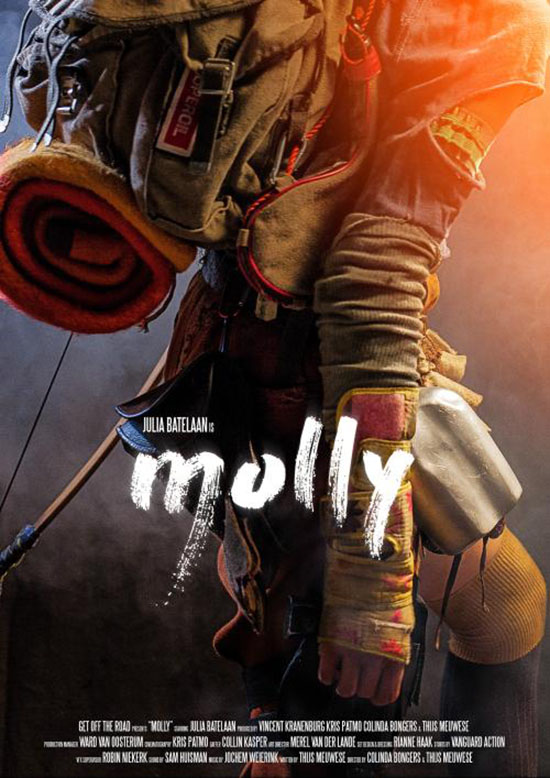 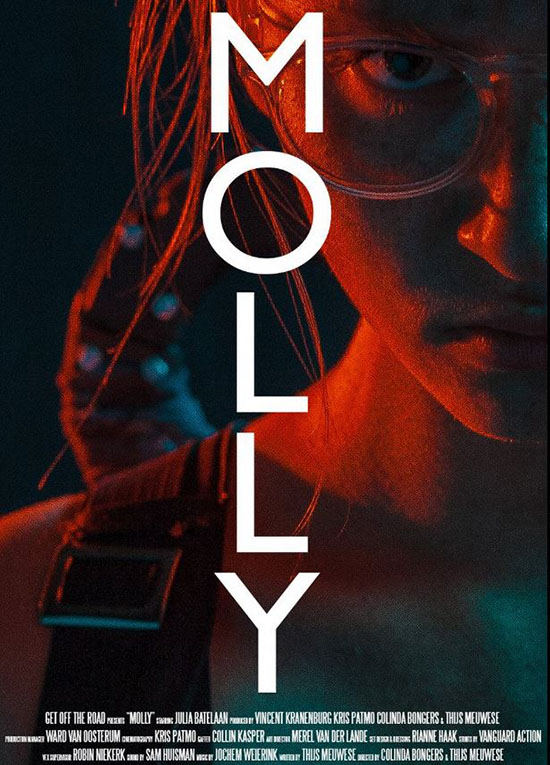 The script  (by Meuwese) appears at first to be something of a mixed bag. I was a bit taken aback, initially, by the lack of exposition and back story for the characters, leading to some vagaries as to motivations and such. We don’t really see how Molly came to her powers (force bursts that seem to emanate from her mouth when she screams). Flashbacks of her in a medical gown and strapped to a table surrounded by doctors seem only to suggest in part that she was experimented on some. We never see what caused the cataclysm that destroyed much of Earth’s population. There’s talk that whatever happened happened a few years ago and that we see some heavy foliage in the landscape would lean the cause of events to more biological warfare than Nuclear. As one who normally rails against the overuse of exposition in film (a frequent fault of new directors), I found myself looking for just a bit more to flesh out the cause and effect of the characters and situations. I was mollified some toward the end when I saw that this picture was shaping to be the first of a series and that more answers were to come in casually laid out fashion ala Jackson’s Lord of the Rings trilogy. The only problem there arises if no sequels actually materialize. A roll of the dice. 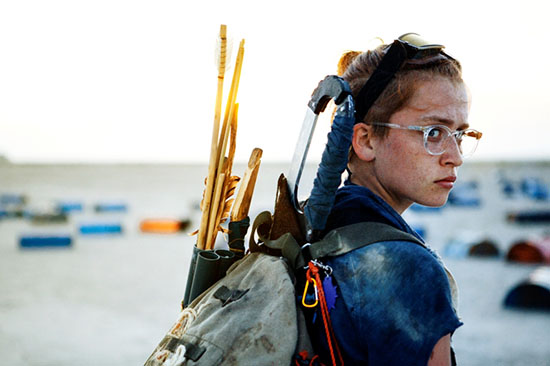 The cast acquits itself nicely and enacts just the right game energy for the proceedings. I was especially taken with Julia Batelaan’s raw, emotion-charged performance as Molly. Her mixture of fear, guts and vulnerability reminded me of Jennifer Lawrence in the Hunger Games films. It’s enervating to see women of power getting a chance to be at the center of the fight and Batelaan takes the baton and runs with gusto. Emma de Paauw provides a suitable fodder for Molly’s maternal impulse as the child Bailey Molly runs across in her travels. A hint of feisty spirit and independence to Bailey that is often missing in the stock crying/cute/precocious toddler Hollywood loves. Joost Bolt has a grand time breaking the hammy meter with all kinds of gestating histrionics as the villainous Deacon, providing reminder to older fans such as myself of veteran movie loonies like Jack Palance or Michael Ironside. 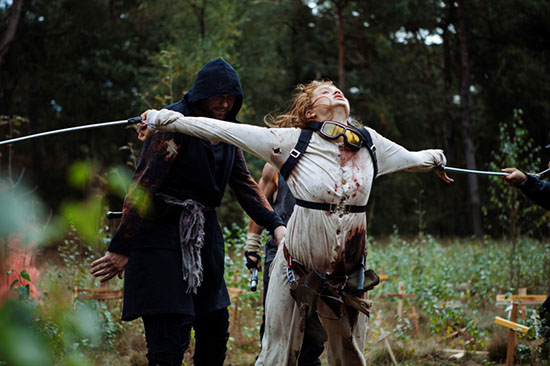 It would be a stretch to say that Molly replaces Mad Max in the arena of bleak futuristic fun and games on celluloid. But it just may be the best that $310,000 could buy and just as fun. In fact, if fun were a race in Tinseltown, Molly would be the last-minute entrant that gallops past the Disneys, Paramounts and Tom Cruise-attached works to the finish line, shocking the world. Except for me.

Molly (2017) is now available on bluray per Artsploitation Films