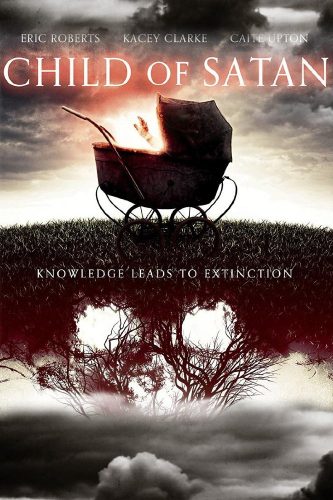 After a freak accident during her baby shower, Allison, a dedicated nurse, is rushed to the hospital. After the premature birth of her son Neron, strange events emerge: illusions, vivid dreams, and unexplained killings. The events are linked back to Neron as Allison is taken by sudden premonitions that reveal the victims of her son’s next choice. Reverend Jones (Eric Roberts) recognizes an abysmal evil power in Neron and tries to free the boy by all means possible.

Conventional wisdom suggests that all children need love, but Child of Satan has convinced me the Spartans had it right—there are some babies that need to be cast off the cliff, and this film is undoubtable one of them. Harsh, yes, but let’s get into the nitty gritty of this addition to the devil-spawn genre before you chastise my judgement.

The film opens five years in the past, where our “hero” Kevin Dunn (Yves Bright) stumbles into a bar somewhere in Mexico during a Day of the Dead celebration. He slurs his way through drunken conversations with all four patrons at the bar in an attempt to find his American pals, but to no avail. The fact that our filmmakers couldn’t fill the place with actual Hispanic people is mind-boggling in and of itself, but not so much as the introduction of a Papa Doc-styled Haitian witchdoctor named Moll (!), played by character veteran Raymond Forchion. Moll leads Kevin into what looks like a fortune-teller’s tent, where the inebriated American is put under by a mystery drink. Once out, Kevin has awkward green-screen sex with a smoldering-eyed woman that we never see again. Forchion provides the only light in this film, and it’s snuffed out by his complete absence after this first scene.

After his otherworldly liaison, our intrepid lead awakens in the middle of a Mexico street—or, more likely, a Santa Monica back alley—beside a dead prostitute. The best way to deal with this, it seems, is for him to run away, and for the film to jump to the present. Now safe and sound in Southern California with his pregnant wife Allison (Kacey Clarke of Resident Evil: Aftermath), the audience is given a few seconds to mistakenly think Kevin has mended his foolish ways. This assumption is dispelled when, immediately after his wife delivers his infant son, Neron, Kevin sexes up her best friend Tara (Caite Upton, not to be confused with Kate Upton). No fear, though, because ruddy-faced baby Neron is a devil-spawn that spends his non-nap time turning unlikable characters into zombies.

What little Neron (played by actual infants, which is a welcome touch) intends to do with his army of the undead—that’s anyone’s guess. Forchion’s voodoo guru never returns, and Eric Roberts’ ten minutes of screen time as the exposition-spouting priest is impossible to track, though he does give new momma Allison a magical dagger, ala a downsized version of The Omen’s daggers of Megiddo. Roberts appears to literally be holding his paycheck in his pocket, waiting until he can rush out and cash it before the bank closes (and, likely, to get out of the Party City priest outfit they put him in, which is so small that the open back reveals his street clothes).

This is where we can no longer avoid discussing the effects in this film. Had similar effects been present in the original Star Trek, I’m confident that William Shatner would have quit after seeing the dailies. The demonic energy occasionally shot into adults from the general area around Neron’s head appears to be static clipart of electric bolts, and Bright’s demonic love scene happens in front a blue sky image with a mysterious fuzzy white bar stuck in the center of the screen. Blood and breaking glass are 3D stock effects laid over the video, and completely ignore that the objects they represent remain in-frame and unaffected.

In addition to the bad effects, the actual directing and camera work is both frustrating and confusion-inducing. Cameras are placed far away, scenes are poorly mic’ed, and characters are shown holding starting positions, apparently waiting for the directors to call “action!”

If anything good could be said about this film (aside from Raymond Forchion’s all-to-brief presence), it’s that I imagine the directors’ friends had a nice time trying to act. To say anything beyond that would be a lie, but who knows—if you’ve got yourselves a gaggle of friends willing to count how many times a line is fumbled, or take a shot whenever digital blood evaporates into nothing, then Child of Satan might be right up your alley.