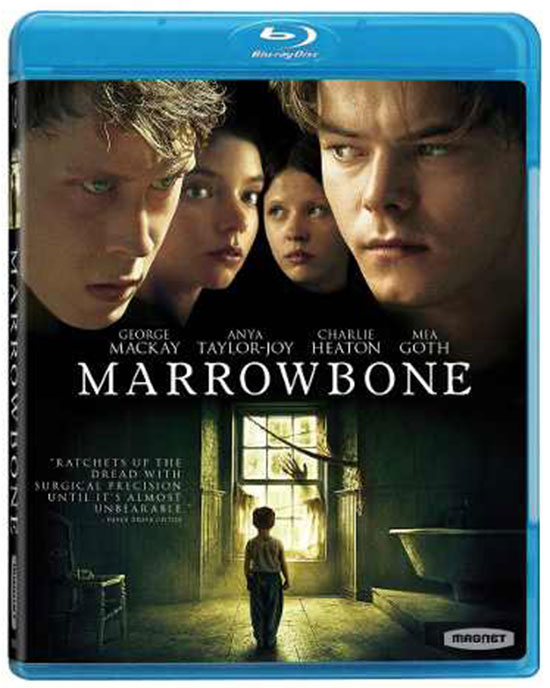 A young man and his four younger siblings, who have kept secret the death of their beloved mother in order to remain together, are plagued by a sinister presence in the sprawling manor in which they live.

As a horror film fan for some 45 years and a reviewer for the last 10 or so, I thought I was completely prepared and had quite the ample knowledge aforethought prior to going into reviewing a movie that, from the previews and what information I cold glean online, was pretty much a family-with-issues-besieged by-supernatural presence-in-their-new-home haunted house chiller. Suffice it to say its not the first time the proverbial plot twist dagger has been plunged deep into my critic’s cranial region. This was one brutal stabbing I was happy to take and would willingly do it again, uh, not that I’m a masochist or anything. Well, I guess critics are masochist as they have to subject themselves to the occasional turkey, all for the sake of the job. Marrowbone, from first-time director Sergio G. Sanchez, is the rare but delightful bait-and-switch example in film if there ever was one. And kudos to Lions Gate International for producing and Universal Pictures for distributing the feature (in Spain, theatrically; here it is getting the dvd release treatment) as something of a gift to fans of the genre everywhere.

A British family (consisting of mom, sons Jack, Billy, and Sam, and daughter Jane) are on the run. From what, exactly, is unclear at first. Mom takes them to rural America back to her decaying childhood manse. She proclaims that they will now take the name of the home, Marrowbone, as their new surname and vows that they leave all bad memories in the past. Though it works for a time, and they even make a new friend in one of the local girls, Allie, it simply would not be a horror film if the shadows of the family’s dark history did not come back to terrorize them. It’s revealed that they are on the run from a monstrously abusive and murderous husband and dad. Or are they? Nothing is as it seems, including someone or something that is living in their attic.

I’ve been an admirer of Sanchez, at least in the writing aspect, since his debut as scribe for J.A. Bayona’s wonderful Spanish-lensed 2007 chiller The Orphanage, which bears a similarity in setting to Marrowbone (childhood home of one of the main characters) and the same richness in set and character detail. Sanchez would also go on to write the well-done 2012 disaster picture The Impossible, about a tourist family trapped in Thailand during a major Tsunami catastrophe. While the latter film is quite different in both genre and setting to Marrowbone, both do focus on mental toughness under duress and have strong heroines at the core. With that background in layered story-telling, I had similar expectations for his debut as helmer. Suffice it to say that everything on my checkdown list was marked off. One or two areas had multiple checks and even a double star next to them. 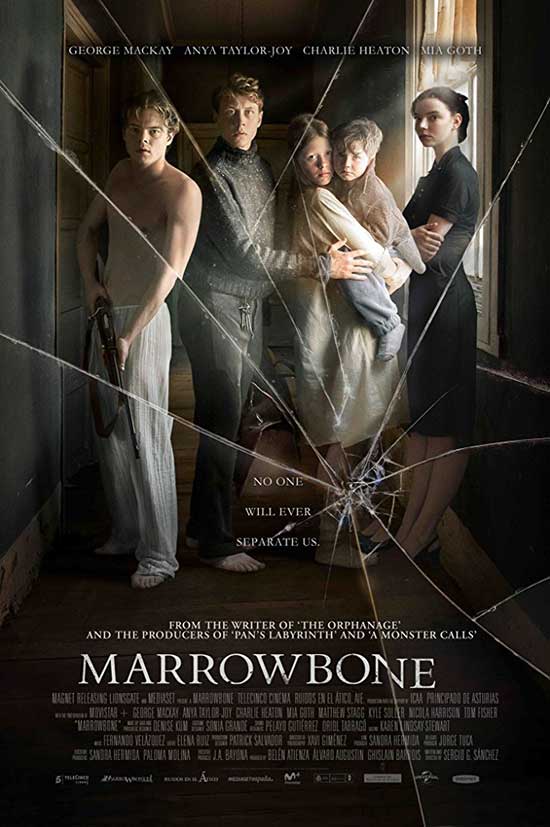 Dually serving as writer on top of his directing chores, Sanchez uses the terror trappings setting to explore issues of child abuse, mental disorders, torture, responsibility brought by maturity, and even forgiveness on a certain level. In fact, the movie plays at times less like a creature flick and more like an intimate family drama mixed with a bit of coming-of-age tale. The use of actual country locales in Barcelona and Asturias, Spain and an existing house structure really help bring out the leisurely-paced aesthetic so prevalent in that quiet drama style. One interesting fact about the making of Marrowbone is that the particular house and location used (and time of day, no doubt) afforded Sanchez the opportunity to rely solely on natural light for filming the interiors of the home. The soft, subtle mood this creates renders an amplification of sorts for the horrors that occur in the darkened attic and outdoors. Rather like the silence just before that super-powered storm hits. Underscoring the deliberately slow speed of events is Sanchez’ editing style, which is more of a purposeful leaving in of scenes in the more is more variety rather than just excising for time. But the ordinary worry of a film’s length leading to restlessness in your seat is allayed by Sanchez utilizing camera movement and blocking of actors to keep things interesting and energized. The runtime clocks in at 110 minutes, yet it does not feel like it’s too long or draggy in places. In not one instance did I stop to look at my watch during viewing! This is difficult for me to do because I can get bored with the best of them!

Of the cast, each of the principals are given their moment in the sun to shine as it were. George MacKay as the eldest son Jack and hero of the piece, stands out in a subtly intense James Spader way. Portraying internalized emotion and torment seems to be a forte of his and I would hope he furthers this skill in other projects. Similarly, Anya Taylor-Joy inhabits her role as Allie, the new friend/love interest for Jack. There’s a real maturity and inner resolve to her role that echoes the tough heroines that Sanchez the writer leans toward thus far in his work. The support roster more than backs up the stars, especially Kyle Soller in a scene-stealing turn as an estate agent and heel in pursuit of Allie for his own relations. On a small side note, it was a bit refreshing to have a story that does feature a child character, Matthew Stagg as Sam, but only tangentally rather than as the focal point. A nice break from the child possessed or kid’s toy possessed formula that is being done to death of late.

So, if you are look for fare that is anything but the norm and is as original as is possible (well, for a genre that has thousands of films to its resume so far in history anyay!), then I suggest that you could do many times worse than check out Marrowbone, a neat chiller that not only defies the formula and expectations, it actually defied its own advertising!

Marrowbone is now available on bluray per Magnolia Home Entertainment