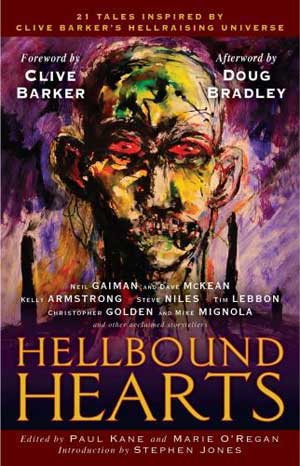 Hellbound Hearts comes as a collection of Hellraiser influenced stories that’s dear to my heart. Being a fan of Barker and all things Hellraiser, I must say it’s great to see that the legacy or mythos is being carried forth. With a new film on the horizon…my guess is there is much more to come. This collective begins with a intro by Barker himself. As you can tell, he is honored to see his little creation take off in spades and be so widely accepted in the horror community. Rightly so, it is as it should be. Creating a minion of hell spawned fetish-influenced demons is an art in itself. For some of us, I think we expect Pinhead and his minions to actually emerge from fiction into a hellish after life in the beyond. If the imagination of authors and artists gives birth to that then this is a great place to start. Some of the greatest horror writing talents have joined talons to take us down into there collective visions of this hell inducing reality spawned from the worlds creative’s.

I was surprised to see Gaiman / Dave Mckean’s great graphic story “Wordsworth” included in these pages. As I prefer the color version from the Hellraiser graphic novels, it is a perfect example of twisted visions taken from the imagination of artistry and presented for your eyes to feast on. I’ve often looked at these pages and said to myself…now, “that’s” dark

The book also as a bonus features the original script given to Mckean before drawing up the artwork. This was a nice touch as it also gives you a bit of behind the scenes into the inner workings of Mckeans way of thinking

Hellbound Hearts is collection of tales inspired by the Hellraiser legacy. What I found reading thru each was not so much of a short story approach with a twist ending or moral but a deeper look into those unlucky enough to summon the Cenobites themselves. Graphic, violent and always a slice of pain and pleasure the Cenobites know only one thing. That is destruction and manipulation. We find those who yearn for the experience, those who are inquisitive, those who deserve it and those who were naive enough to play with the forces of darkness. The Cenobites often appear in groups and always inflict there painful desires on unlucky participants. Like the essence of evil they lie to indulge, and take as they please.

A fine group of authors range from well known to those who were actually in the productions themselves. Barbie Wilde who we all know as the “Female Cenobite” finally fills in the gaps of who and why a Female Cenobite came to be. As she is called sister Nikoletta was a nun who’s model of perfection only hid the underlying deviancy and sexual urges she kept from others. Pain and pleasure were her inspiration into a path that only “could” lead to the Cenobites. Often the case of paths that lead to hell seem to find a way to come upon the tools. The tools that ultimately call these demons from the abyss in which they inhabit and dominate.

Sister Nikoletta wanted this reality and in return became a servant and eventual inflictor as one of the lead cenobites. Other tales tell of greed, loss, and boredom..as if they all lead directly to the images of suffering.

In further stories, authors such as Mick Garris, Steve Niles, Simon Clark and several others tell of tales where desire turns into surreal. The means to an end all somehow become more or less pawns to the Cenobites, but that journey is often filled with highly erotic, sickening and painful journeys to that end. I was reminded many times as these beast appear from the beyond that they do serve a purpose, but that purpose is spawned from the desolate lost minds who seek much more than they can attain in from this world. The ugliness that these tortured beings are described as, almost serve a metaphoric means that mirrors the darkness that summoned them. In any case, the scenery changes from tale to tale but what most of them encounter is some form of grotesque Cenobite who instructs, reveals and damns all in one. The descriptions are told beautifully.

Final bonus comes in the afterword told by our beloved Doug Bradley who ends the book on a perfect note.

I come out of this book feeling as the writers who dug deep to pull out these stories of damnation and suffering. There is a black abyss that lies deep in the hearts and minds. Hellbound Hearts is a doorway into that notion. Hellbound Hearts will sit proudly next to all things Cenobitovian and Barker whether directly inspired or indirectly awakened it stands on its own as a collection to have.