Home | Film Review: Pirates Of The Caribbean: The Curse Of The Black Pearl (2003)

Film Review: Pirates Of The Caribbean: The Curse Of The Black Pearl (2003) 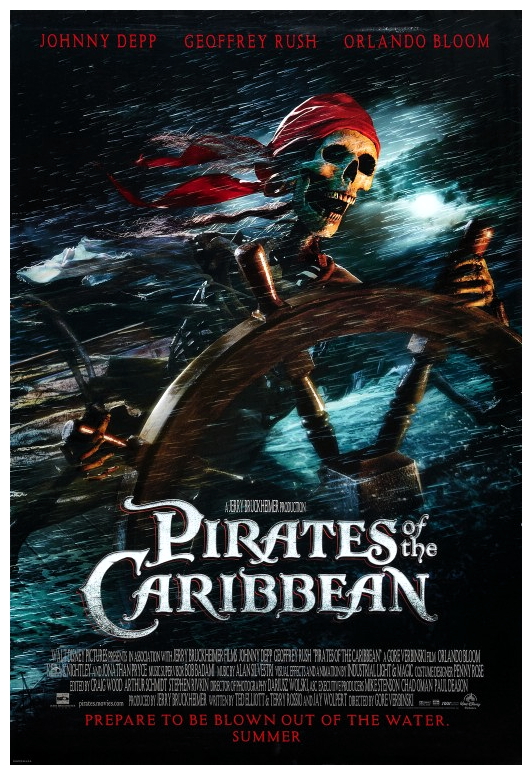 “William Turner, a resourceful young blacksmith, teams up with the eccentric pirate ‘Captain’ Jack Sparrow to save his love, the Governor’s daughter, Elizabeth Swann, who has been mistakenly captured by the clever and treacherous Barbossa, a former ally of Jack, to make a blood sacrifice so as to end the curse that has been cast upon him and his crew. Will and Jack steal a ship from the Royal Navy and arrive at Tortuga, a pirate port. There Jack meets his friend Joshamee Gibbs and, with a buccaneer and able-bodied crew, set sail to save Elizabeth and take back the Black Pearl. Meanwhile, Barbossa discovers that not Elizabeth’s but someone else’s blood was required for the sacrifice. Whose blood is it?” (courtesy IMDB)

In the early nineties screenwriters Ted Elliott and Terry Rossio, inspired by the Pirates Of The Caribbean theme-park ride at Disneyland, wanted to put a spin on the old pirate genre after completing work on Aladdin (1992), but no-one was interested. The duo refused to give up their dream and patiently waited for a studio to pick up their pirate script. Meanwhile Disney Studios commissioned Jay Wolpert to write a script based on their Pirates Of The Caribbean theme-park ride, which producer Jerry Bruckheimer rejected as being too mediocre. Instead he hired pirate historian Stuart Beattie to rewrite Wolpert’s script, and brought in Elliott and Rossio. As the budget skyrocketed (approaching US$140 million) Disney executives threatened to shelve the film, but changed their minds when they saw the work that had already been done. Filmmaker Gore Verbinski, fresh from a trio of hits – MouseHunt (1997), The Mexican (2001), The Ring (2002) – signed on to direct, attracted by the idea of using modern cinema technologies to resurrect a long-dead genre that had pretty much died with the so-called Golden Years of Hollywood. 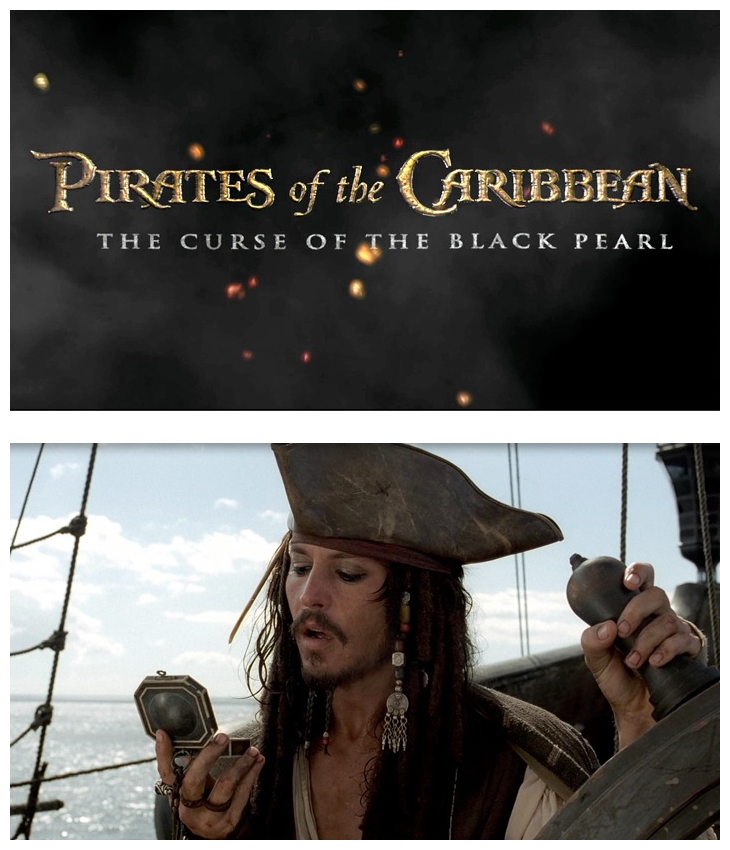 Actors Johnny Depp and Geoffrey Rush signed on soon after. Depp was attracted to the story because A. rather than looking for treasure, the pirates were trying to return it, and B. the traditional mutiny takes place off-screen. It was Depp who insisted on Jonathan Pryce for the role of Governor Swann, and Verbinski wanted Rush to play the evil Barbossa after seeing him as over-the-top villains in both Mystery Men (1999) and House On Haunted Hill (1999). Rush brought his friend Orlando Bloom on board because they’d been working together on Ned Kelly (2003). Even before its release, many executives and critics expected the film to flop for a number of reasons: 1. There hadn’t been a successful pirate movie for many years; 2. Depp was not known for big-budget blockbusters; and 3. It was based on a sixties theme-park ride. Against all odds, Pirates Of The Caribbean: The Curse Of The Black Pearl (2003) became both a critical and commercial success. 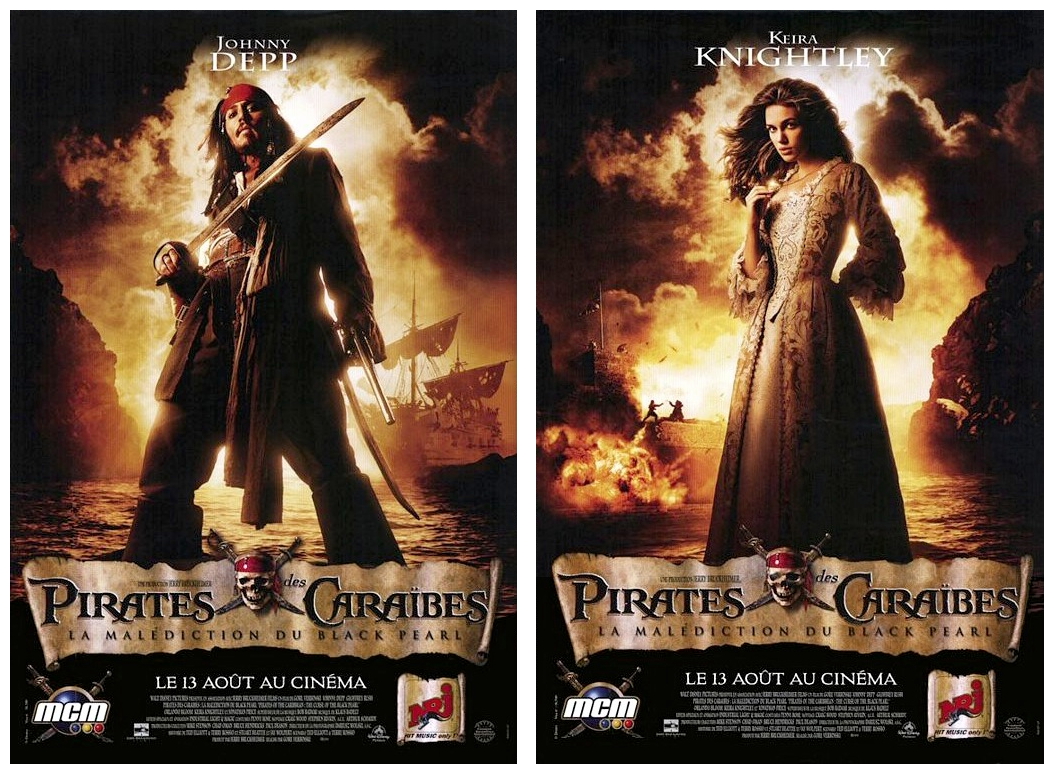 In the film we meet sly and savvy pirate Captain Jack Sparrow (Johnny Depp) teaming up with Will Turner (Orlando Bloom), a blacksmith who can handle himself in a fight, to find Will’s lost sweetheart Elizabeth Swann (Keira Knightley), who also happens to be the daughter of Governor Swann (Jonathan Pryce). She’s been kidnapped by the dreaded Captain Barbossa (Geoffrey Rush), Sparrow’s former skipper and a man with a most curious problem – he and his crew have been damned to an existence that is neither life nor death. Only a blood sacrifice can end this terrible curse, prompting Captain Jack into some resourceful counter-planning. One of the tricks that made this franchise work was the introduction of the supernatural to the traditional pirate scenario, although there was relatively little of this in the first film. What worked here was the set-up, introducing Depp as the mercurial pirate (basing his accent and look on Keith Richards of The Rolling Stones), the English Rose love interest of Elizabeth, the slightly hapless blacksmith of Will and, in the sinister shadows, the ghostly master-pirate and Jack’s nemesis, Barbossa. Jack is obsessed with avenging Barbossa’s former treachery, and Elizabeth and Will get caught up in the hell-bent struggle between the two pirates. 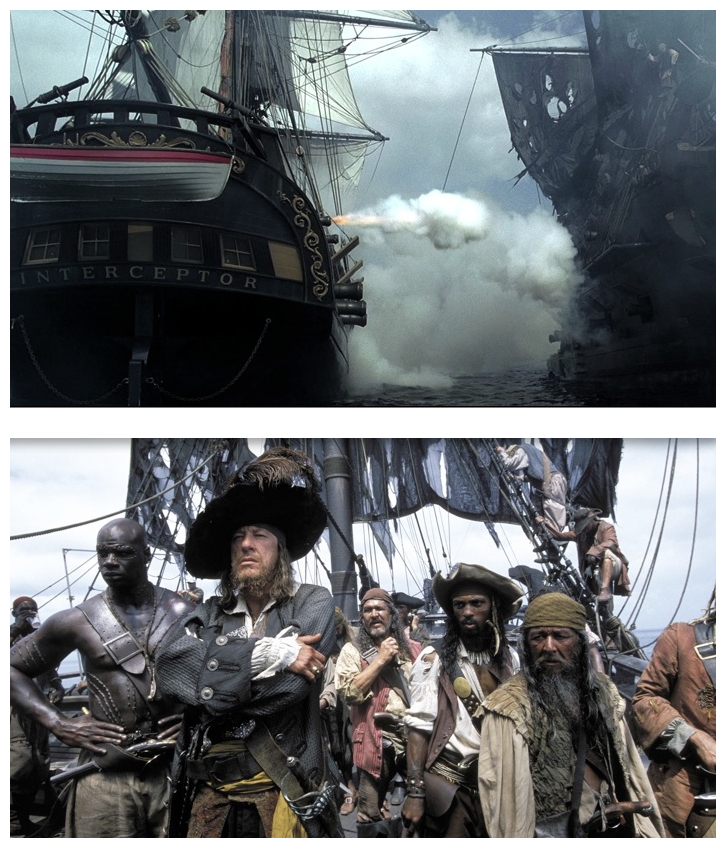 This uneven but spirited romp inspired by the much-beloved Disneyland attraction wound up launching an unlikely new powerhouse franchise, one that – for better or worse – shows no signs of drifting away any time soon. Pirates Of The Caribbean: The Curse Of The Black Pearl took a big risk in trying to reinvent the rather moth-eaten pirate genre, but the gamble proved spectacularly successful, not least due to astute casting and great visual effects, producing a series if increasingly outrageous sequels. The mixture of exotic locations, moody art direction and supernatural themes such as voodoo spiritualism were only some of the ingredients in the formula that made the series work. Twisted plotting and imaginative effects aside, it’s the casting of the indispensable Johnny Depp as the wildly theatrical (and possibly mad) Captain Sparrow that dominates Pirates Of The Caribbean. Like Robert Downey Jr in the Iron Man (2008) or Sherlock Holmes (2009) films, he’s more than just the right actor for the part – for many audience members he’s the main reason they bought their tickets in the first place. 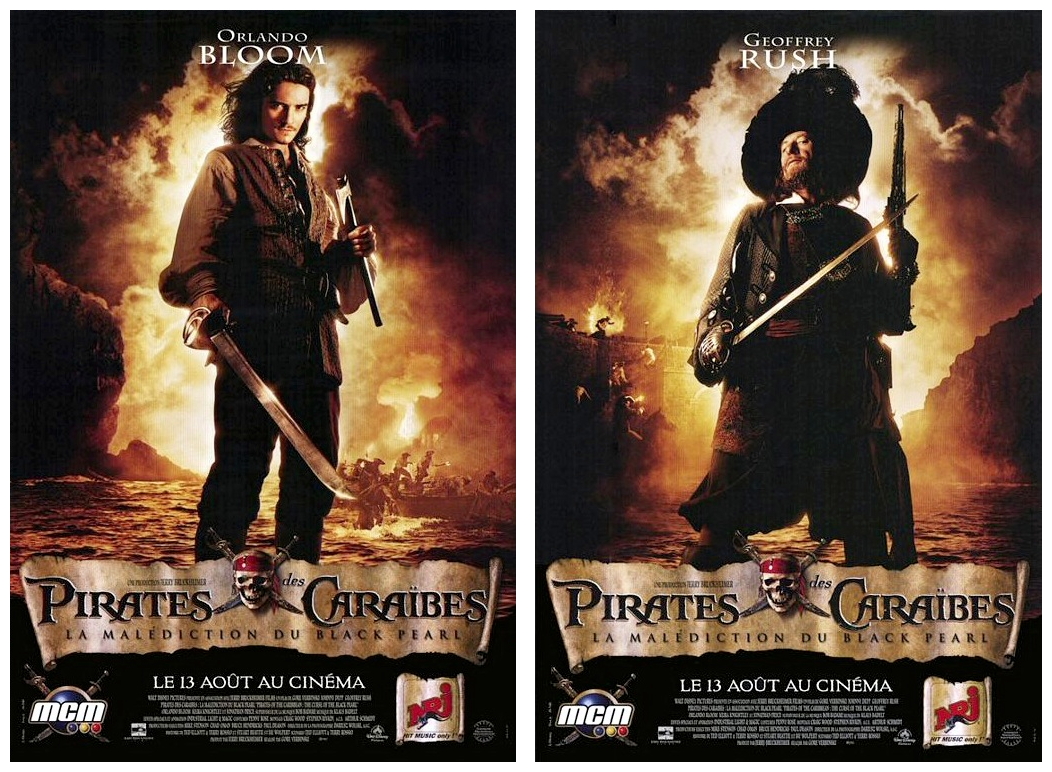 Orlando Bloom and Keira Knightley are comfortable in their roles as a pair of angst-ridden lovers who share a precious moment from the past, and equally convincing is resident villain Geoffrey Rush and pompous romantic rival Jack Davenport. But it’s pretty much Depp’s movie, whether he’s preening like a diva or diving to Knightley’s rescue with Tarzan-like machismo. For this bit of casting, and providing a fresh and colourful take on seafaring ghost stories in general, Pirates Of The Caribbean: The Curse Of The Black Pearl deserves viewing. It would be tempting to say that this film and its sequels resurrected the moribund pirate film genre but, alas, that never actually happened, and swashbuckling sea stories remain decidedly unpopular with modern viewers. Somewhere between the failed excesses of Hook (1991) and Cutthroat Island (1995) lies Pirates Of The Caribbean, transformed into a crowd-pleaser mostly because of Depp’s oddball performance, but also due to the high quotient of scarifying set pieces and other over-the-top elements. 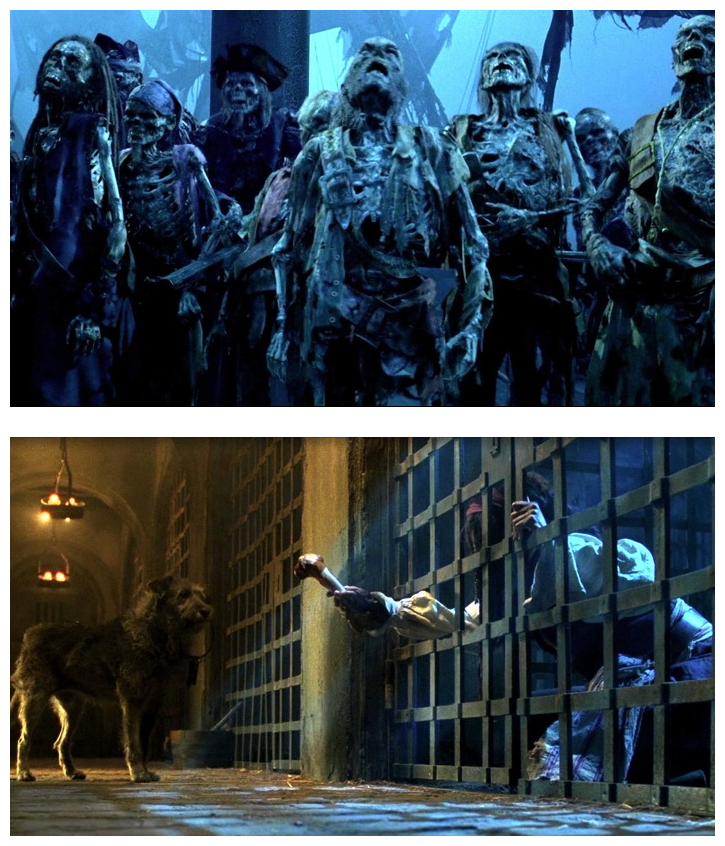 The result is an entertaining family film with enough spins to bemuse all but the snobbiest critic. Granted, somewhere within this roller-coaster of confection is an enchanting premise about a young girl from a regressive era who dreams about living as a free-spirited pirate, only to get her chance in real life. The ‘cursed crew’ angle allows for some breathtaking effects from Industrial Light & Magic, with Barbossa’s horrific crew doggedly walking across the ocean floor to surprise a shipload of soldiers being a standout sequence. But mostly, this initial extravaganza is agreeably fun and frivolous like the theme-park ride it celebrates. The story continued with Dead Man’s Chest (2006), At World’s End (2007) featuring Keith Richards as Teague, Jack’s father, and On Stranger Tides (2011). After seeing how promising the first film was, the cast and crew signed up for two sequels to be shot back-to-back, a practical decision on Disney’s part to allow more time with the same cast and crew. 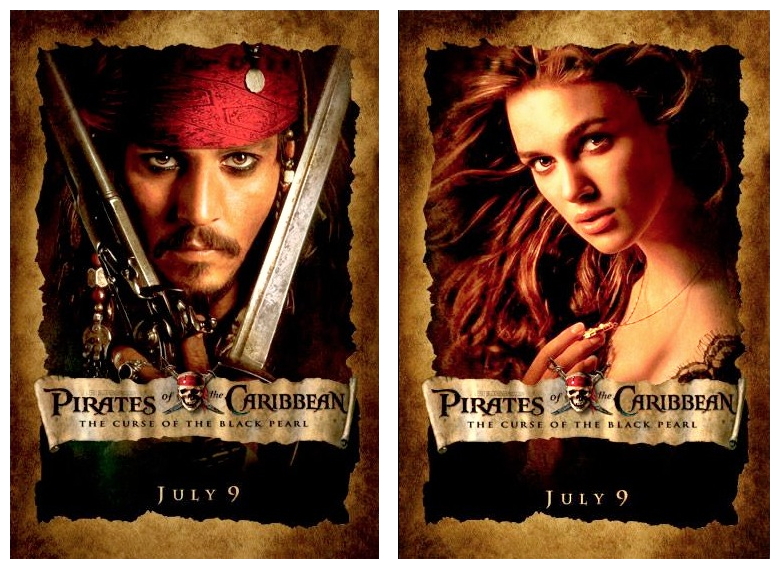 This process of making a film and its sequel simultaneously was made popular after Back To The Future II (1989) and Back To The Future III (1990) were made, but it really began when Ilya Salkind and Alexander Salkind produced The Three Musketeers (1973) and The Four Musketeers (1974). The sequel was assembled from unused footage shot for the first film, and the cast and crew were forced to sue the producers in order to get paid for the second film – but I digress. Pirates writers Elliott and Rossio knew that with the same cast they had to retroactively turn The Curse Of The Black Pearl into the first of a trilogy. They decided to introduce Davy Jones, the Flying Dutchman, the Kraken, and the historical East India Trading Company, all of which are mentioned in the first film and represent a counterpoint to the themes of personal freedom represented by pirate culture. While making the sequels, Rossio and Elliott discovered the novel On Stranger Tides by Tim Powers and were inspired to make a fourth film. 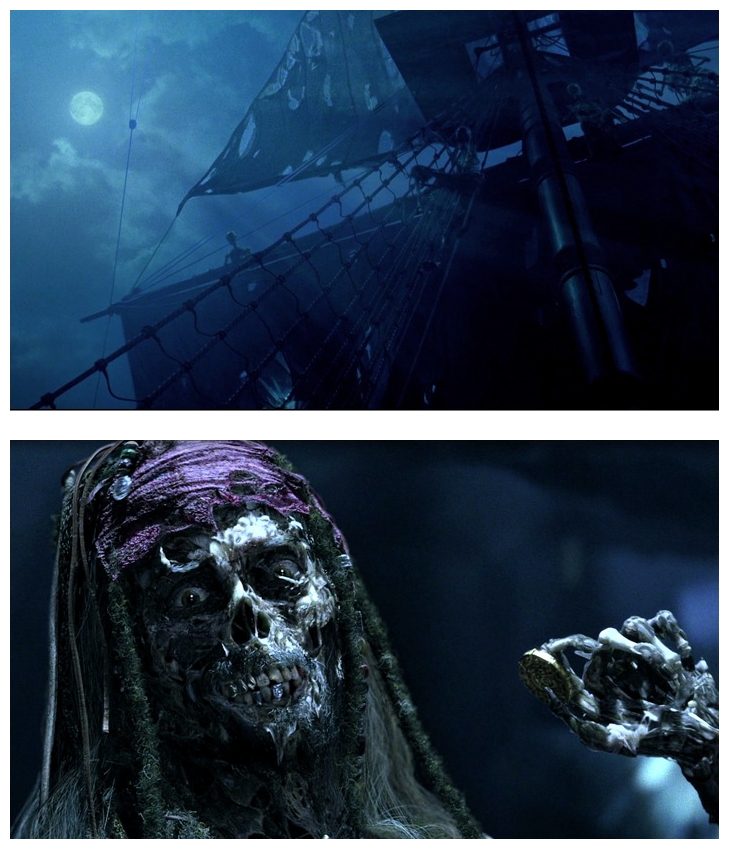 Depp and Rush returned to their roles, with the addition of Ian McShane as Blackbeard, Penélope Cruz as his daughter Angelica and Jack’s love interest, and Richard Griffiths as King George II. Because the first three films were so expensive to produce, Disney green-lighted the project with specific instructions that the budget be kept to a minimum – with a total budget of almost US$380 million, On Stranger Tides sill holds the record for the most expensive film ever made. The fifth film in the franchise, Pirates Of The Caribbean: Dead Men Tell No Tales (2017) is, at this writing, set to be released in May 2017, and has had a rather chaotic history. 2011 it was announced that Terry Rossio would write the screenplay without his usual partner Ted Elliott. 2013 it was confirmed that Rossio had been dropped and Jeff Nathanson was hired as writer, while Norwegian duo Joachim Rønning and Espen Sandberg were signed to direct. Release date was set for 2015 when producer Jerry Bruckheimer decided the script needed a complete rewrite. 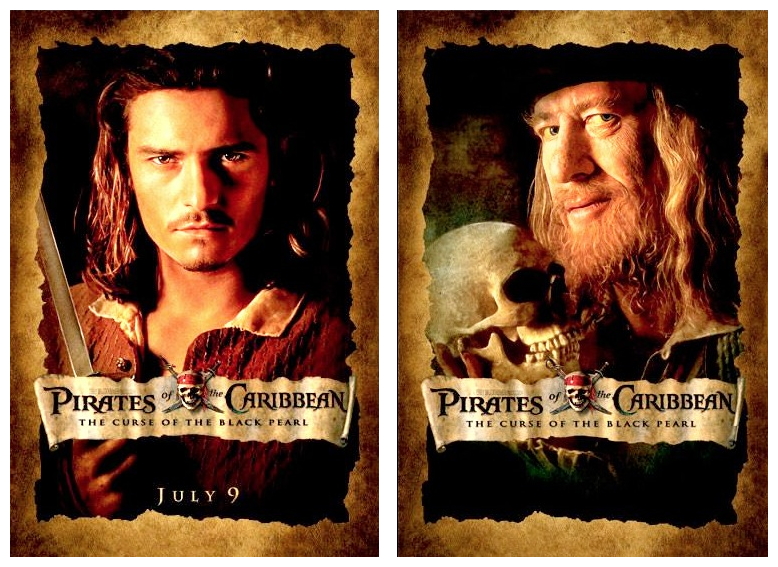 As is the norm nowadays, the production was filmed under strict security and secrecy, and behind-the-scenes news can come from the oddest of sources. Ian Walker, the Queensland Arts Minister, confirmed that the fifth instalment was shooting in Australia after the government agreed to AUS$20 million of tax incentives. Pre-production started in September 2014 and finally went before the cameras in February 2015, the most expensive film ever shot in Australia. The Pirates Of The Caribbean films gleefully juggle every possible pirate ploy and cliche, including ghosts, phantom crews and ships, mermaids, sea monsters, voodoo magic and eye-watering special effects to form a frothy mixture of action, adventure, dark thrills and romance. At this point I’ll wish you good evening, promising to see you again next week for more cinematic smegma than you can shake a schlock at for…Horror News! Toodles! 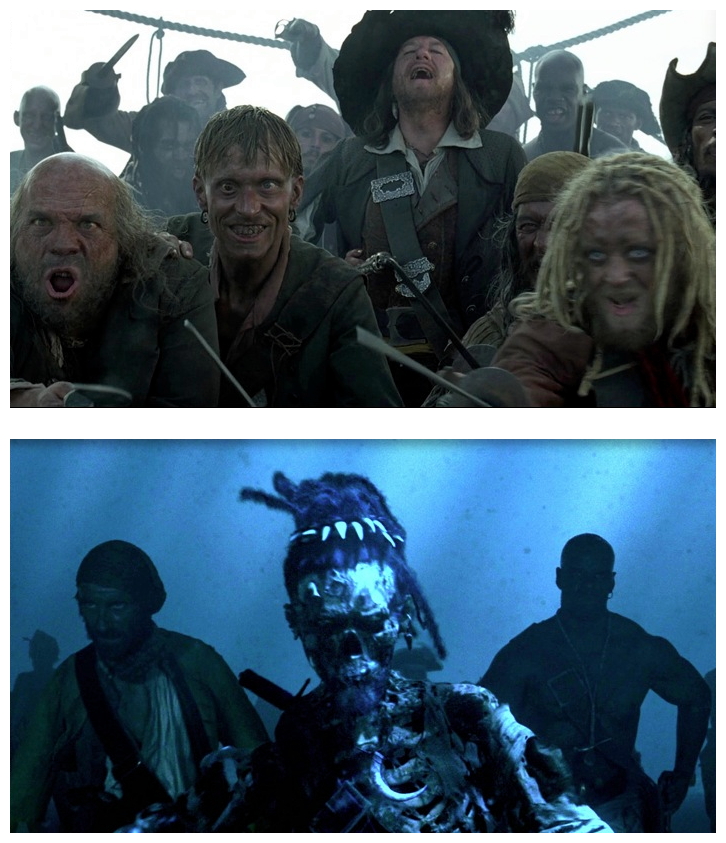 Pirates Of The Caribbean: The Curse Of The Black Pearl (2003)