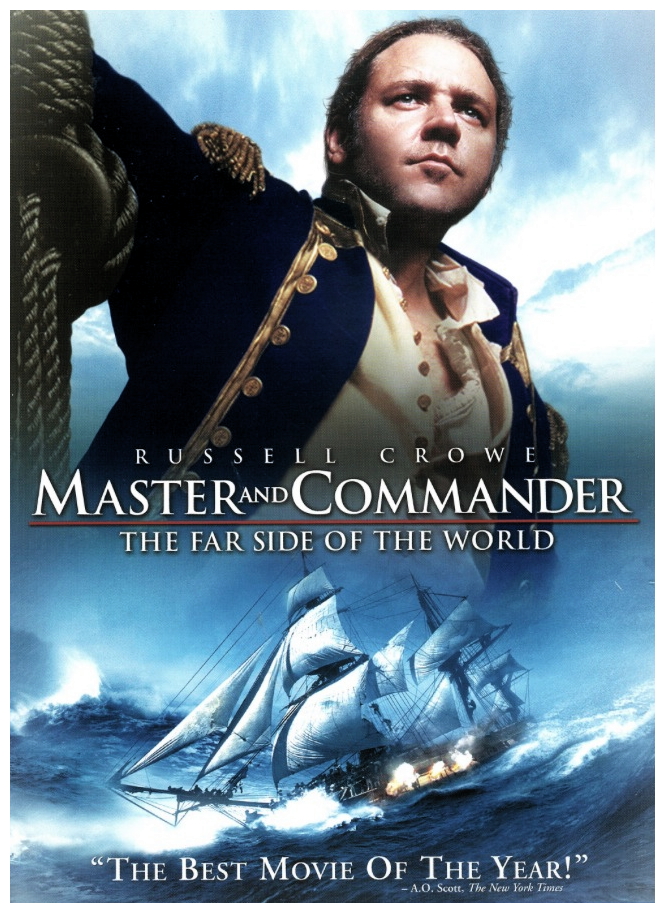 “In April 1805 during the Napoleonic Wars, the HMS Surprise, a British frigate, is under the command of Captain Jack Aubrey. Aubrey and the Surprise’s current orders are to track and capture or destroy a French privateer named Acheron. The Acheron is currently in the Atlantic off South America headed toward the Pacific in order to extend Napoleon’s reach of the wars. This task will be a difficult one as Aubrey quickly learns in an initial battle with the Acheron that it is a bigger and faster ship than the Surprise, which puts the Surprise at a disadvantage. Aubrey’s single-mindedness in this seemingly impossible pursuit puts him at odds with the Surprise’s doctor and naturalist, Stephen Maturin, who is also Aubrey’s most trusted advisor on board and closest friend. Facing other internal obstacles which have resulted in what they consider a string of bad luck, Aubrey ultimately uses Maturin’s scientific exploits to figure out a way to achieve his and the ship’s seemingly impossible goal.” (courtesy IMDB)

Released only a few months apart, Master & Commander: The Far Side Of The World (2003) and Pirates Of The Caribbean: The Curse Of The Black Pearl (2003) may both be adventures on the high seas, but that’s where the similarities end. In Master & Commander, two Australians who have conquered Hollywood – A-list actor Russell Crowe and award-winning director Peter Weir – come together in the greatest movie set at sea since Leonardo DiCaprio went down with the Titanic (1997). Seemingly out of no where, the looming shadow of a French man-o-war ship materialises from the dense fog. With a cluster of explosions, a thousand-pound iron cannonball whistles past and slams into the British frigate, ripping into the hull and splintering the mast with a deafening thud. In the ensuing chaos, sailors scream as the ship’s rigging crashes to the deck. As the dust settles aboard the HMS Surprise and the French enemy ship slinks back into the mist, two men survey the damage – the ship’s captain and his medical officer. 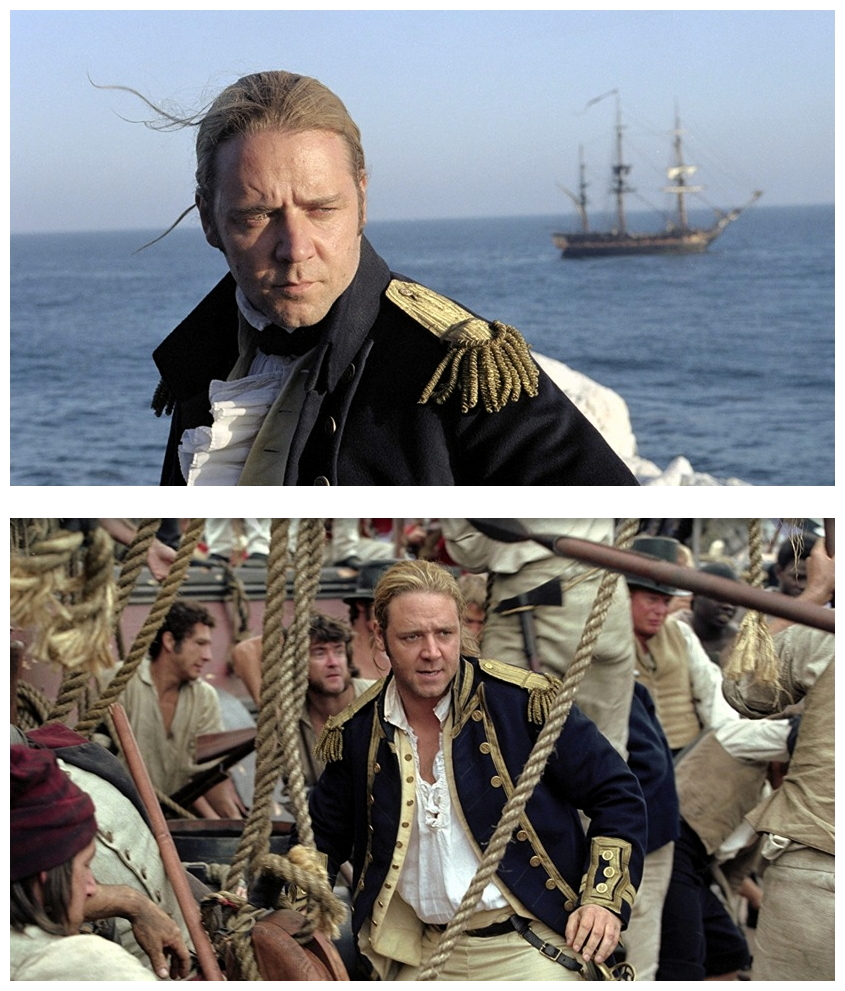 So begins Peter Weir‘s masterpiece Master & Commander: The Far Side Of The World. From these very first moments, it is so realistic you can almost feel the seasickness, smell the salty air and sense the claustrophobia setting in as the crew are crammed into the ship’s underbelly. It grips from the get-go. As the film transports us to 1805, it introduces us to the conquests at the height of the Napoleonic Wars. Aboard the pride of the British navy’s HMS Surprise is Captain Jack Aubrey (New Zealand-born Australian superstar Russell Crowe) with his friend and doctor Stephen Maturin (Paul Bettany, one of the best actors of modern cinema). After his ship is ambushed by the enigmatic French vessel Acheron, armed with swifter speed and more cannons, against his wisdom and better judgement, ‘Lucky’ Jack Aubrey fixes his enemy in his determined gaze, and gives chase in attempt to follow his orders to seize or destroy the Acheron. 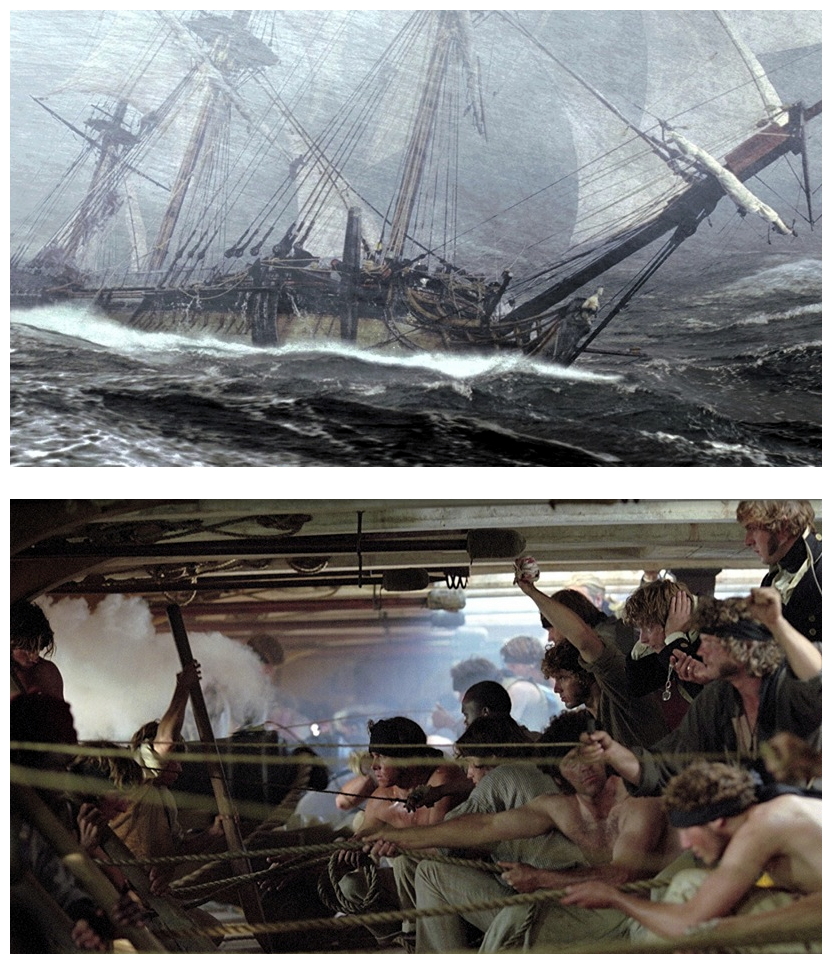 Throughout the film, Aubrey’s pursuit takes him and his crew of able seamen from the Caribbean seas down the coast of South America, to the icy waters of Antarctica and finally to a nautical game of cat-and-mouse into the Galapagos Islands (the first film to be shot in the actual islands, apparently). Based on the first and last of a twenty-novel series written by Patrick O’Brian, Master & Commander is truly a oceangoing adventure, more than 90% of which takes place at sea. With a US$135 million budget, Master & Commander was a seafaring epic filmed almost entirely on water, with all the logistical nightmares that it entails, and not one single female character in sight. Instead of a romance, it is the story of the camaraderie of the all-male universe aboard a ship and, in particular, of the complicated friendship shared by two very different men. Crowe is a rare breed of Hollywood star, a thinking man’s action hero. 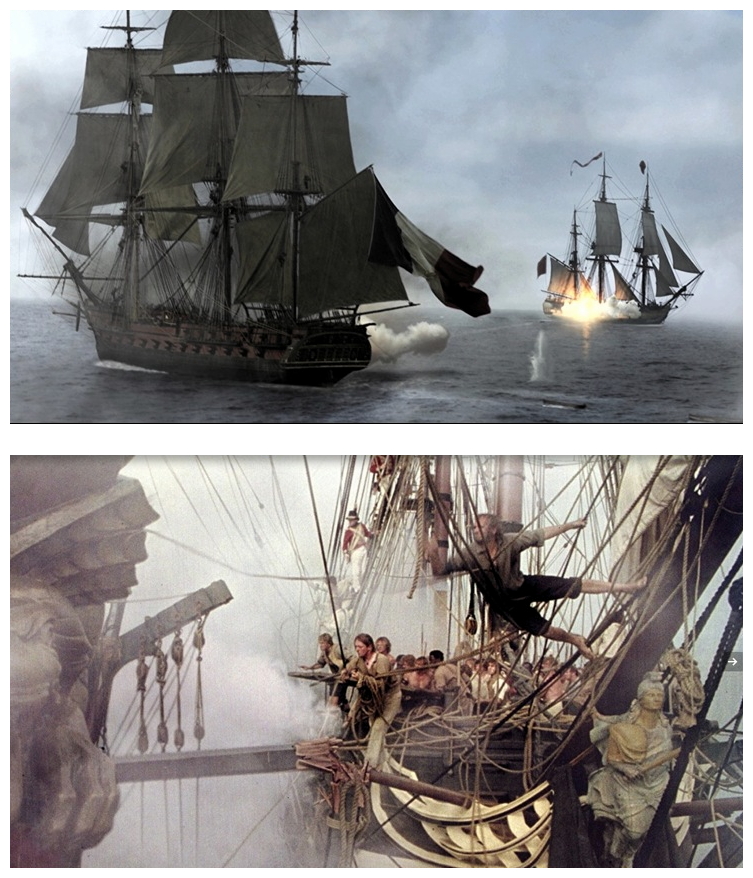 As in his Oscar-winning performance as Maximus Decimus Meridius in Gladiator (2000), Crowe possesses a commanding physical presence, rivalled by few actors of whom only Marlon Brando and Robert De Niro spring to mind. Impressively, Crowe’s greatest accomplishment is his ability to assume the introverted tormented characters with much the same dexterity he exhibits in his heroic roles. The famous character of ‘Lucky’ Jack Aubrey is a composite of the uncompromising-yet-compassionate hero of a bygone era, who is guided by his own moral compass and whose steely resolve, at times, borders on insanity. “He was the kind of man who doesn’t exist anymore, there’s no template for Jack Aubrey. If you’re talking about the British Royal Navy as his employer, he was a very unruly employee. However, in the broader sense of the mission with which he is charged as a captain, he might not do it the way you want him to do it, but his results at the end of the day will be far more than you intended.” Crowe has a natural energy and authority, almost as if he was born to play the character. 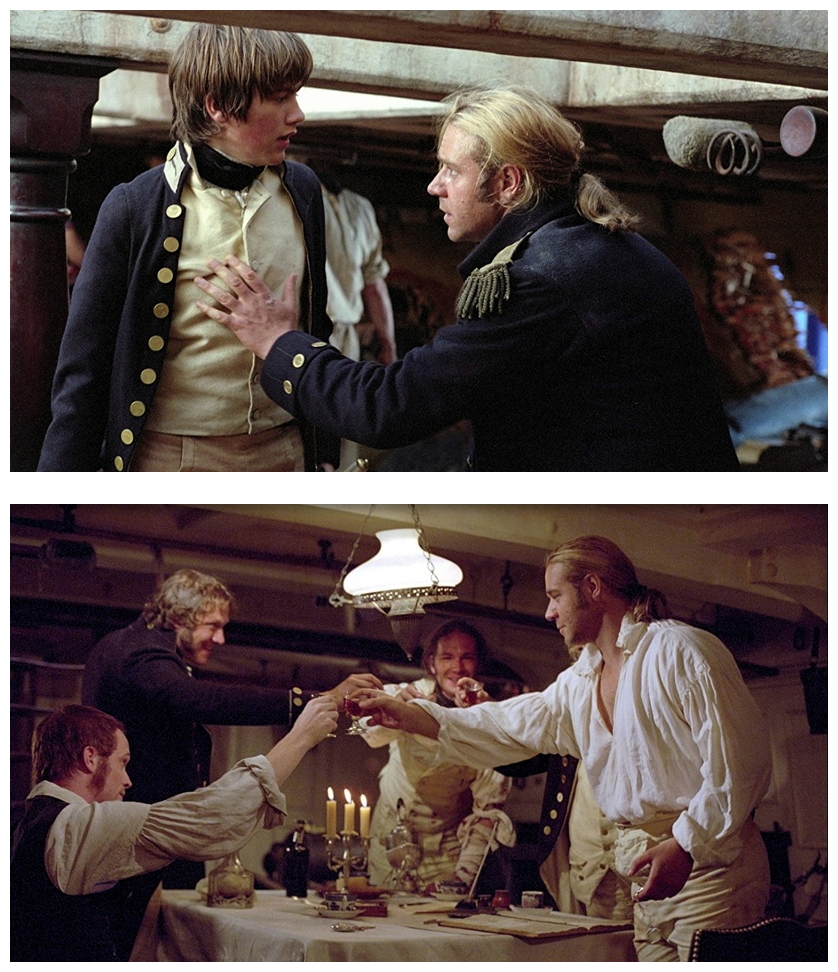 Crowe threw himself headfirst into the dedicated research for the role. He learned all the skills of seamanship, technical jargon and colloquialisms, as well as studying the ship itself. His passion for the role even led to six months of learning to play the violin and, before long, Crowe found himself becoming quite fond of his character after months on location. “Every day, between my trailer and the set, I would hear ‘Good morning Captain’ about seventy or eighty times. Actually, it was difficult giving up the uniform, I’d grown quite fond of it.” Opposite the pragmatic Crowe, Paul Bettany provides the balance and contrast of Stephen Maturin, the ship’s doctor, amateur cellist and aspiring botanist before the days of Charles Darwin, who dreams of stumbling upon all manner of birds, reptiles and plants unknown to the eyes of Western science. His character, Maturin, is the intellectual of the duo, the reasoned and rational scientist who worries that his captain’s determination to capture the Acheron at any cost verges dangerously on obsession. 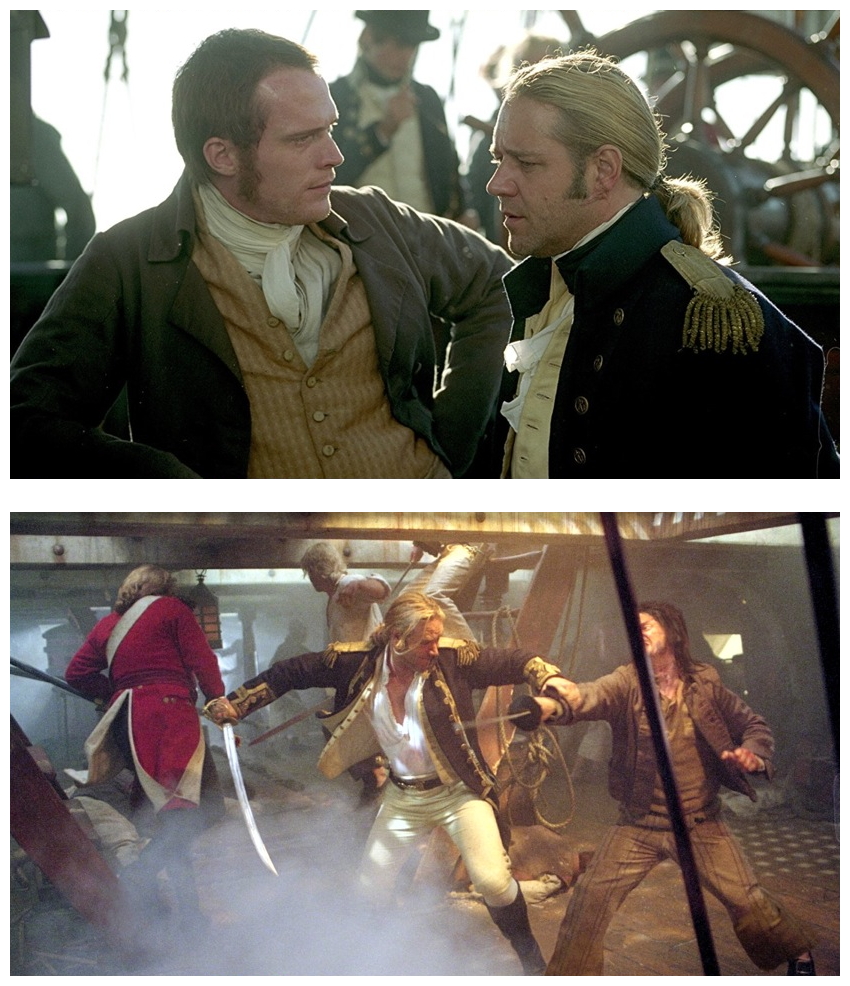 Maturin studies people the way he studies animals. He is also a cool-headed practitioner able to perform brain surgery on the swaying deck of the boat in the midst of a bloody battle and treating his own bullet wounds without hardly breaking a sweat. In preparation for the part, Bettany researched the medical procedures and equipment of the period, to familiarise himself with his role as a physician. Having already worked together on A Beautiful Mind (2001), where Bettany played Crowe’s amusing imaginary college roommate, they reunited here. “We developed a kind of creative shorthand in A Beautiful Mind that I thought would serve us well in establishing quickly and effectively the Jack-Stephen dynamic. I was so glad Peter made the decision to cast Paul. There are rhythms and things that we just understand of each other. With another person, you might actually have had to break down a scene and explain it. Paul and I were able to get to a point of depth that you might have to work ten times harder with someone else to even touch on.” 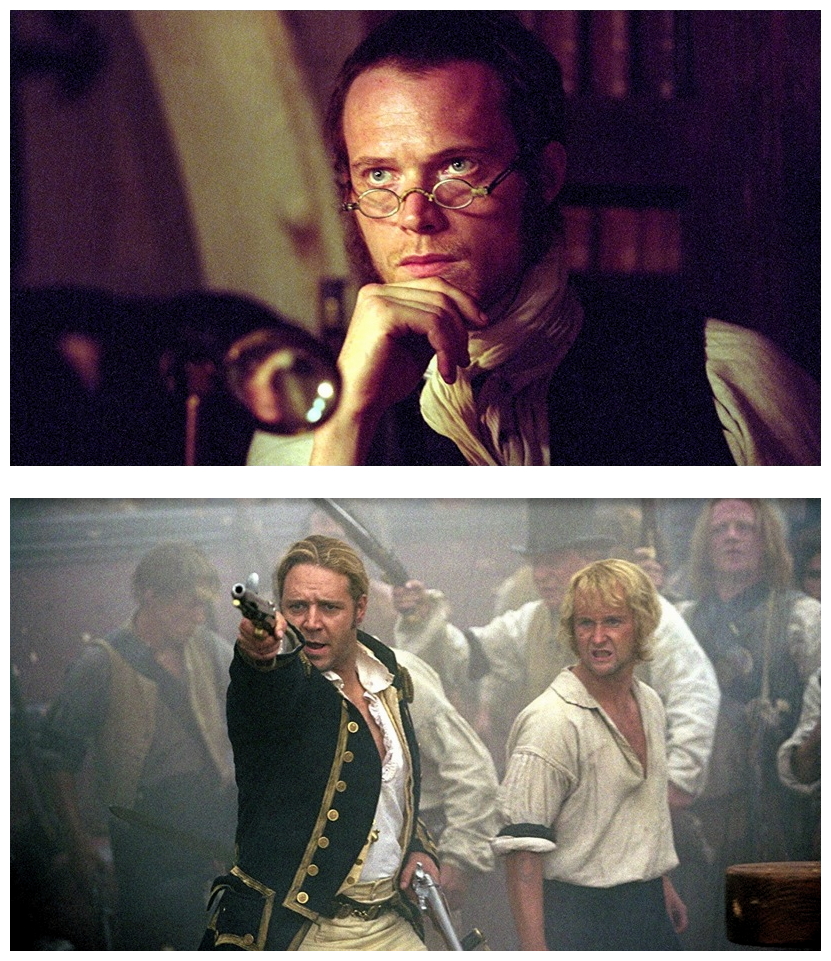 Australian director Peter Weir, best known for Picnic At Hanging Rock (1975), Gallipoli (1981), Dead Poet’s Society (1989) and The Truman Show (1998), was undaunted by the challenge of recreating a whole world, with an immaculate and almost pedantic attention to period detail and historical accuracy. His accomplishment was ultimately recognised with a Best Director BAFTA, beating Peter Jackson to the award. Weir and his casting agents scoured the world of over seven thousand hopefuls to find actors and extras to play the 130-odd crew of the Surprise, in search of those whose appearance resonated with the look of the period. Many of these extras were real seamen who are seen scrambling up the rigging of the ship, giving those scenes an air of authenticity. After a tireless tour of relics and replicas, Weir purchased an American tall ship called the Rose to stand in for the HMS Surprise. The real-life sequences shot at sea and caught in the middle of a storm were captured with the Rose. 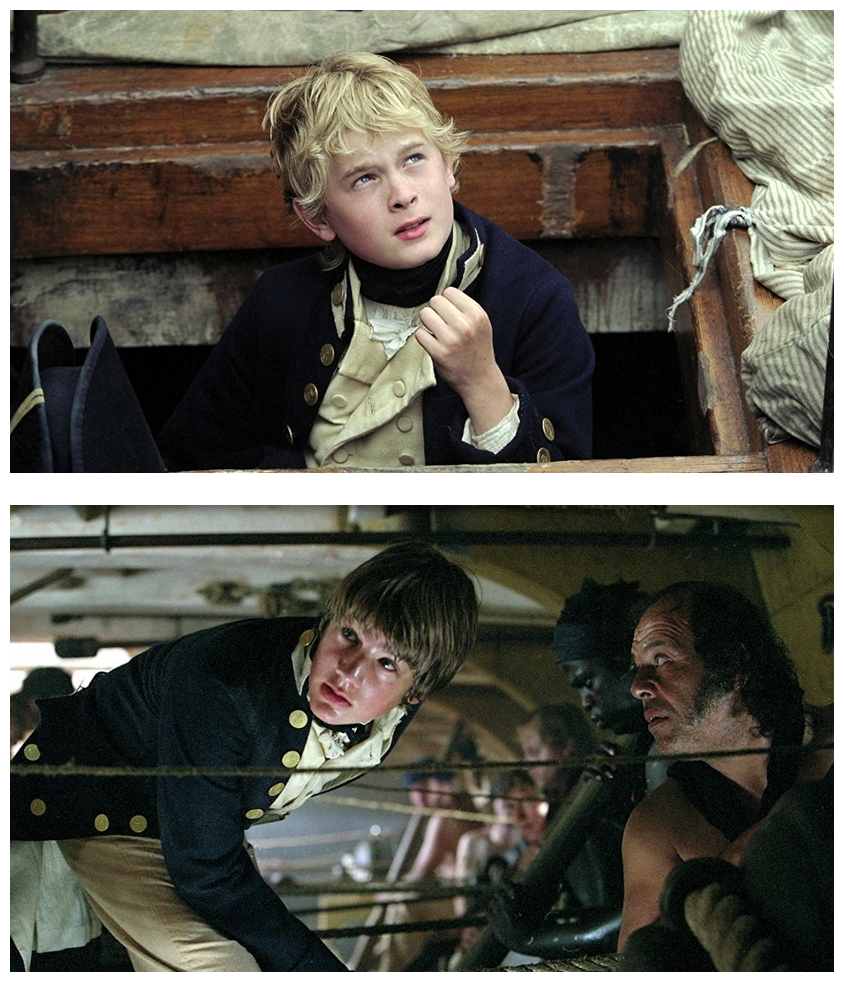 The rest of the ship, including its interiors from the chandeliers of the captain’s dining hall to the mess hall and bunks of the crew, was built as an almost exact replica at the Fox Studios in Baja, Mexico, in the same six-acre water tank where just a few years before James Cameron sank the Titanic (1997). For six months the cast and crew worked tirelessly and hung out together at the Monkey Lounge, a bar built especially for cast and crew bonding. Miniatures were painstakingly designed and built by Weta Workshop in New Zealand, and complimented by CGI from effects houses of Asylum and Industrial Light & Magic, in order to create battle sequences and storms. While all this may seem obsessive, Master & Commander is full of grand spectacle and the cumulative impact of all this is to make us suspend our disbelief and seamlessly capture the period of the early 19th century. Perhaps an even greater accomplishment is that in its quietly observed moments, Master & Commander: The Far Side Of The World never loses sight of its humanity for the sake of pyrotechnics. 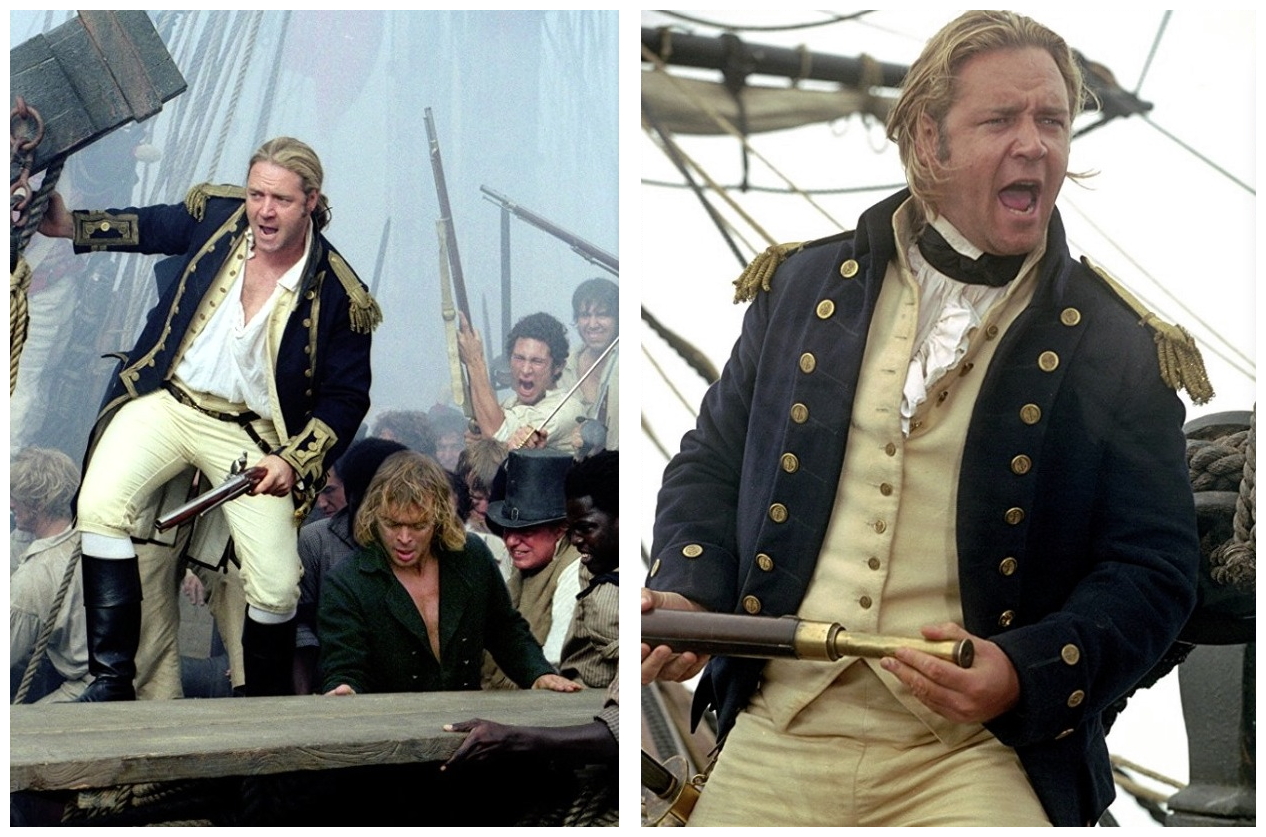 While the naval battle sequences are quite fantastic, the film is successful because director Weir chose to build the story to get to know the men who are locked aboard the tight quarters of a small ship and how they interact everyday. The officers and the mates are well-known by the time the final battle comes. Bettany offers a strong performance as the surgeon and naturalist who balances the violence of his chosen life with the quiet demeanour of the scientist. He is the captain’s friend and confidant, and the two would often play violin and cello duets together. The horrors of the injuries from the war are frequently implied, but vividly depicted in the reactions of the characters. It’s on this uplifting thought I’ll bid you a good night and ask you to be sure to return next week with a stout heart, an iron stomach and a titanium bladder for another head-melting romp through the garden of unearthly delights known as…Horror News! Toodles! 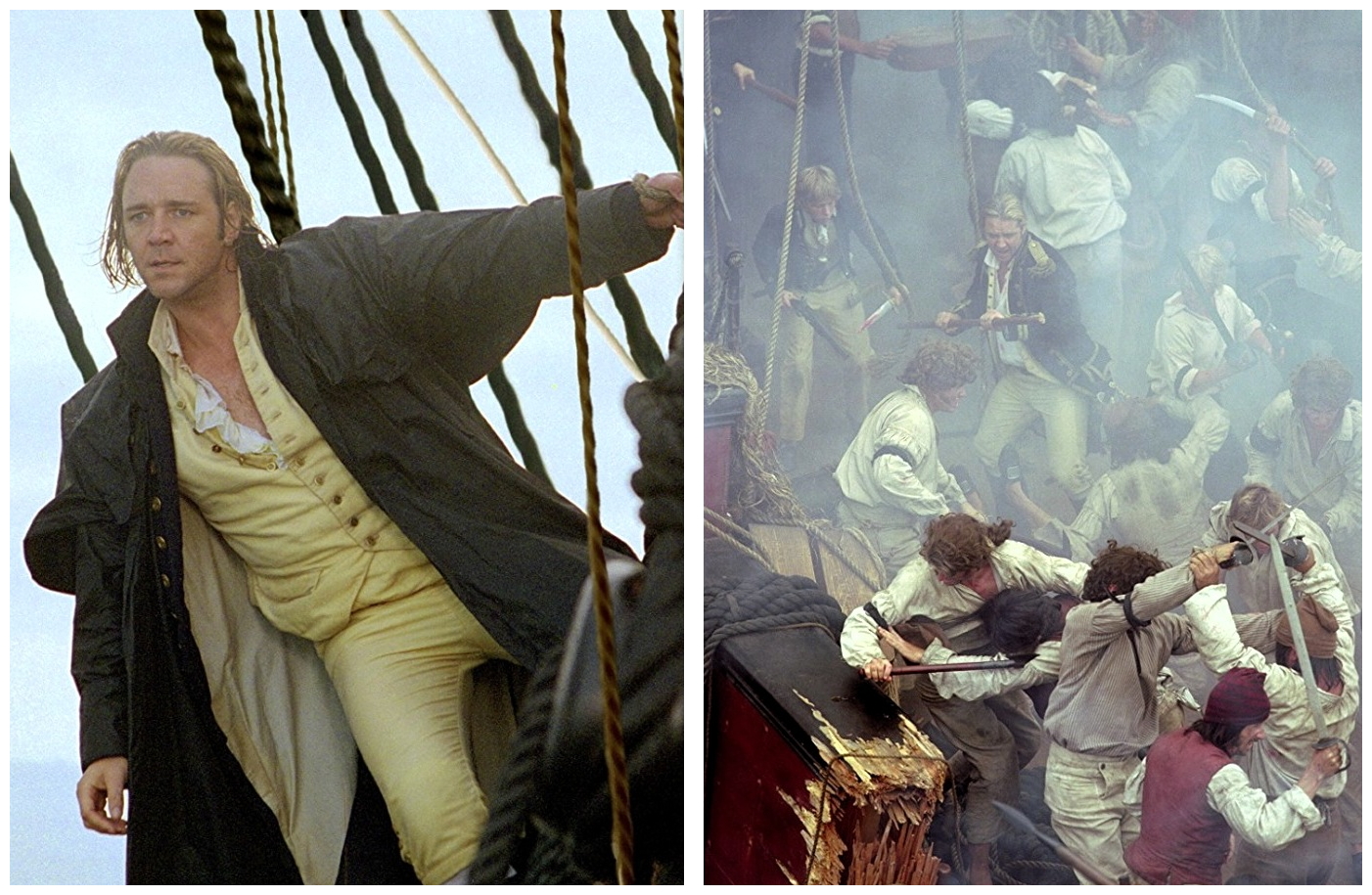