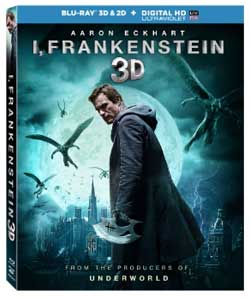 After being shuffled between two different release dates (& missing both of them) last year, the cinematic powers that be have decided to do what they were really planning to do all along and release I, Frankenstein to theaters in the cinematic graveyard otherwise known as…January. And in doing so they’ve succeeded in making January 2014 one of the most god awful months in recent memory as far as new genre films go. Two weeks ago I suffered thru some nonsense called Paranormal Activity: The Marked Ones. Last weekend it was the execrable Devil’s Due but at the very least those were low budget disasters that looked and felt like they were produced to be nothing more than filler on a slow week at your local bijou. But with an announced budget of $65 million dollars, the producers of I, Frankenstein (who were also responsible for the Underworld series) obviously intended this to be the first of a series of films featuring our favorite flat headed (he doesn’t have a flat head here), flame avoiding monster. 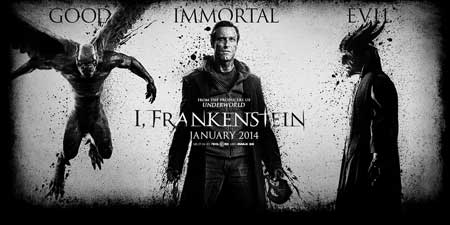 Unfortunately all they ended up with is a film that has no idea exactly what it wants to be and ends up a silly, overproduced & underwhelming boondoggle that’ll most likely be available on DVD by the end of February in an attempt to recoup some of their money. Good luck with that fellas…

The plot (or what passes for one) is a ridiculously overwrought one that makes little to no sense under close scrutiny. After a quick 2-3 minute recap encapsulating the end of Mary Shelley’s original tale we learn that there are a race of demons who are hunting the monster (Aaron Eckhart) down to do something with him but we’re not told what. We also find out that there are a race of gargoyles (!) that are the invisible protectors of mankind & the sworn enemies of the demons so anything that they desire is something that the gargoyles have to keep from them since it can’t be any good. 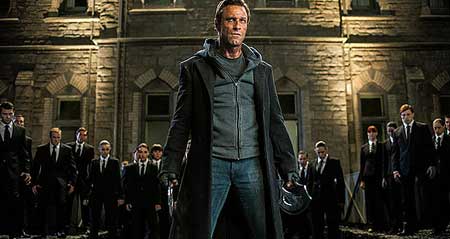 After the monster buries his creator, he’s set upon by the demons and almost captured but the gargoyles have been watching and they rescue him from his demonic assailants. Afterwards, the gargoyles attempt to explain their cause to him but the monster will have none of it and refuses their aid. But before he leaves the gargoyle queen, Leonore (Miranda Otto) gives him two things, some weaponry that’ll help him defend himself against the demons and a name…Adam. The monster then wanders the globe for over 200 years (He’s immortal after all), fighting off demons when necessary but essentially just existing, nothing more. He does pick up some handy fighting skills over the centuries though and he’s really handy with his fists. He also gets a pretty snazzy haircut although I’m at a loss as to how he maintains it. 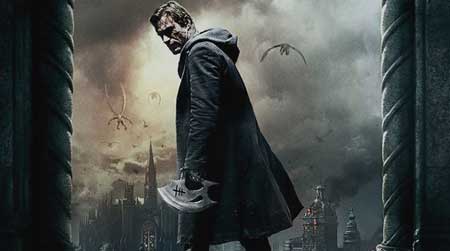 Anyway…in the interim the demons have been attempting to figure out how to reanimate a human body in order to possess it with a demon. The plan is to reanimate/possess thousands upon thousands of dead humans with demons and build an army that will not only wipe out what’s left of the gargoyles but take over the world! The demon prince, Naberius (Bill Nighy), has been storing bodies away for centuries in preparation for the big event too, he has them all stored away in some gigantic facility that for some unknown reason no one has ever noticed despite the fact that you need a pretty big storage area to store and maintain thousands of dead people. At least I think you do anyway.

Naberius has a scientist who’s been working on a solution to reanimating dead bodies for the past three years also, the beautiful Dr. Terra (Yvonne Strahovsky) but after those three years (& millions of dollars) she’s still having a bit of trouble reanimating a dead rat so the prospects for reanimating a human being are kind of slim but she does get that friggin’ rat to start breathing on its own eventually so there’s hope. If only Naberius could get a hold of Dr. Frankenstein’s journal – or his creation. Then she can crack the case wide open using knowledge gleaned from Dr. Frankenstein’s work and Naberius can get to reanimating all of those dead folk he has hanging around. Of course it might help if she actually believed that Frankenstein was more than just a story written hundreds of years ago but good ole’ Naberius is gonna take care of that for her in rapid fashion.

Needless to say the film then devolves into a series of battles with poorly animated CGI gargoyles battling demons who dress a lot like Mr. Anderson (of the Matrix series) and all seem to be wearing the same crappy Halloween mask. In a misguided attempt to make these battles look relevant they use an awful lot of martial arts moves on each other rather than the expected ripping & shredding that you might see if you ever ran into a street fight between a demon and a gargoyle, I don’t think they’d be particularly graceful while tusslin’ but that might just be me. And while I’m on the subject of streets I would be remiss if I didn’t mention that while the city this whole bowel movement of a film takes place in is never mentioned, it is the perfect city to wage a gargoyle/demon war in since there are literally no humans on the streets of it.

Ever. I suppose this is a good thing though since when demons die they blow up into grand plumes of flame and when gargoyles bite the big one they turn into gorgeous streaks of blue light that shoot straight up into the heavens. Every fight scene in the film turns into a late night rave where you can see & hear the lights for miles all around yet no one – – NO ONE ever seems to notice anything amiss on the streets of their extremely lifeless city. I was actually wondering exactly who the gargoyles were trying to defend since there wasn’t anyone around to save – except for the gargoyles that is. To be fair we do see some humans enjoying themselves in a club at one point & riding the subway at another but I’m guessing that the clubbers were tourists who left before the fighting started and the subway riders went home to their windowless apartments so they couldn’t see all of the fireworks taking place in the night sky anyway.

If you couldn’t tell by now then lemme make it easy for you, this movie is a train wreck of epic proportions. It literally feels like they were making it all up as they went along and just decided to hope that no one would notice its absolute inanity. Written & directed by Stuart Beattie and based on a graphic novel by Kevin Grevioux (that I doubt anyone had ever heard of before this film), I, Frankenstein is one of the stupidest and most wrongheaded ideas for a movie it’s ever been my displeasure to sit through. None of it makes sense which is bad enough but what really kills it is that none of it is any fun either. Maybe it would’ve worked if they went with the inherently campy ideas presented herein but it’s all taken far too seriously (Eckhart grimaces & furls his brow so much throughout the proceedings that it looks painful and if he isn’t careful his face is gonna stay that way) and since the entire film takes place in the evening it’s a particularly dark & ugly film too. 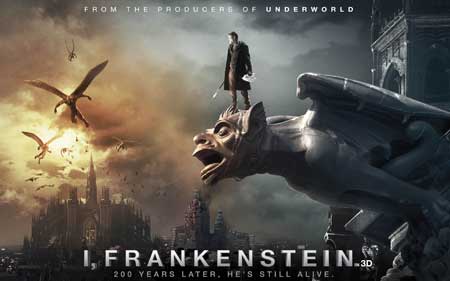 Everyone in the film is slumming, giving lifeless performances that offer little to no emotional weight to their characters whatsoever. Bill Nighy looks particularly pained and more than a bit embarrassed to be involved in this mess especially because of it’s similarity to the Underworld films (which he also appeared in). Miranda Otto tries really hard but staring off into the distance with a pained look on your face isn’t really acting unless you’re in a commercial for upset stomach relief. Strahovsky looks great but in terms of the believability of her performance…she sucks, maybe the worst scientist in a film ever. But she’s really, really cute and that’s gotta count for something doesn’t it? Eckhart gives it his all and in the film’s (sadly predictable) final line and scene it’s obvious that he’s thinking “FRANCHISE” but that ain’t gonna happen.

I, Frankenstein is already on the fast track for the top spot of “Worst Film Of The Year” and it’s leading the pack (which includes the previously mentioned January disasters) by a country mile. It’s that bad. See it if you’re a Frankenstein completest only. And even then I’d stop and think about it for a few tics beforehand – you can use that $8 dollars for a couple of gallons of gas or a quick lunch somewhere maybe. Hell…you can take that money and flush it down the toilet and it’ll still be for a worthier cause than spending it on this misguided mess. Stay away, just stay far away.

I, Frankenstein – .5 out of 5 shrouds (& that’s only because of Strahovsky’s good looks).
I, Frankenstein is now available on bluray per Lionsgate Entertainment