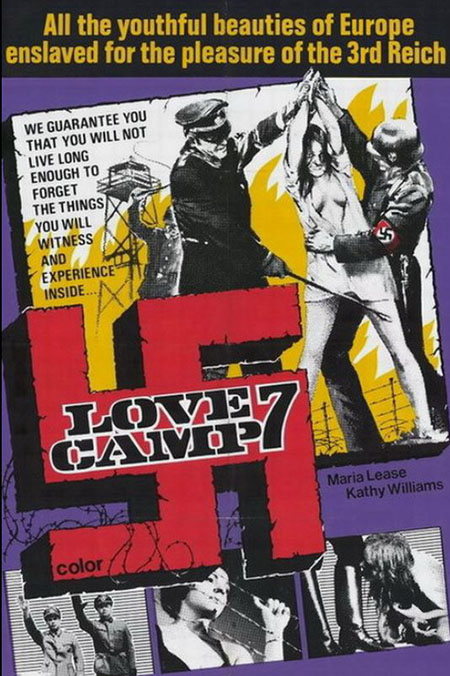 Set in a Nazi “Love Camp” that services the needs of front line officers. The video packaging claims that this film is based on fact, but the plot is so far fetched you would have a hard time believing that. Two young WAC officers go undercover as POW’s in the prison camp hoping to get some information from a scientist that’s being held there, before being sprung out by the French resistance. Unfortunately things go wrong with the break out and they end up overstaying their welcome and being subjected to the same indignities as the other inmates.

Obviously this is a tongue-in-cheek description – there’s actually enough layers and structure here that an entire book is dedicated to the fairly limited subgenre (see Nazisploitation! The Nazi Image in Low-Brow Cinema and Culture, by Daniel H Magilow and Elizabeth Bridges). That book gives us a word that describes these films even more succinctly — sadiconazista, or “sadism with Nazis.” And the first film daring enough to mix the sexploitation genre with Nazism, thus bringing to the big screen the “Nazi adventure” stories from men’s magazines and going far beyond the realm of “nudie cuties,” was 1969’s Love Camp 7. 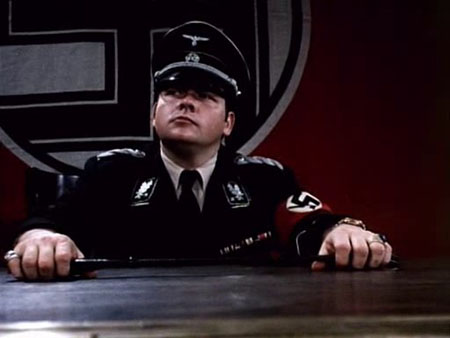 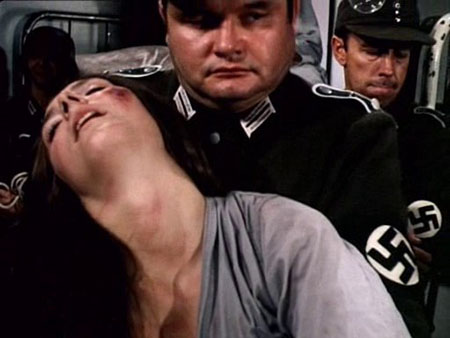 The plot of Love Camp 7 is fairly simple: an important informant of the Allies, Martha Grossman (I always try to list who plays the main characters, but unfortunately the credits weren’t much help here and the internet doesn’t give much help either), has been captured by the Nazis and brought to an all-female prisoner camp in which the soldiers use them as sex slaves, or in their words, “whores for the SS.” Knowing full well what the job entails, two US soldiers, WAC Lt. Linda Harman (Maria Lease) and WAC Lt. Grace Freeman (Kathy Williams), volunteer to go into the camp as prisoners, find Grossman, and find out what she knows, the whole plan hopefully ending with their rescue. Once they’re in, cue the gratuitous nudity, sex, and torture.

Love Camp 7, directed by Lee Frost (The Thing with Two Heads, The Defilers) and written by Bob Cresse and Wes Bishop, is not the best Nazisploitation film around, but it is one of the first. Not only did it set a precedent later expanded on by the Ilsa films, SS Experiment Camp, The Beast in Heat, and other Nazi/torture-based films, but it was a huge influence on the “women in prison” genre in general; re-watch Jack Hill’s The Bid Bird Cage (among others) and notice the similarities. We’ve got scantily clad-to-nude women all trapped in a small cell, tension arising between some of them, while most of them work together to find a way to escape. 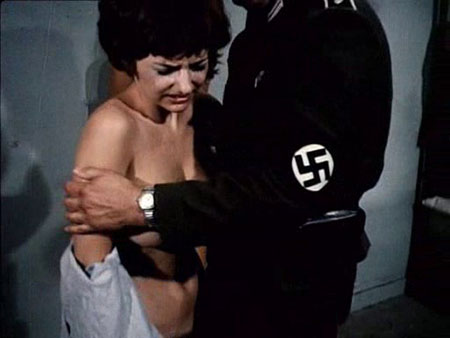 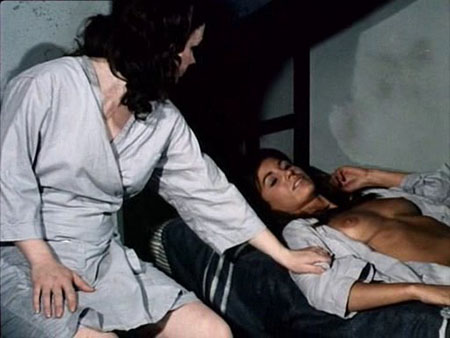 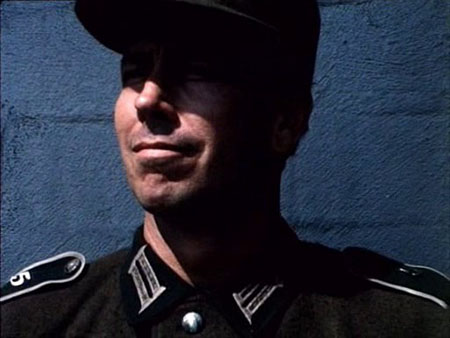 The guards, all men, are abusive and cruel, often forcing the women to strip just because, taking full advantage of them whenever they please. The torture here is mostly limited to whippings and beatings, but there is a particularly nasty “seat of honor” that will make audiences of any gender squirm. And, of course, we end up with lots of gunfire as we reach our climax, a literal blood orgy, as our band of female prisoners tries to escape the clutches of the evil Nazi womanizers. This is now par for the course, but in back in 1969, Love Camp 7 was still constructing the course.

While it is an overall enjoyable film, Love Camp 7 has its fair share of weak points as well. The main story is technically a flashback, as we open in present day London at a business meeting where a man is prompted to tell his WWII story. It also ends with these characters, and an especially cheesy final shot that seems more appropriate for a jewelry or perfume commercial than this type of movie. The overall premise is a little far-fetched – how lucky that the women happened to get sent to the exact camp they were hoping to get sent to – and the proceeding plot details reflect that same stretched reality. We’re even introduced to a polite Nazi soldier, Sgt. Gotthardt (played by co-writer Wes Bishop), who does not like the experiments (which we never really see) going on at the camp, and does not want to rape the women, but would rather make sweet, tender love to them – which, somewhat insultingly, one of the women happily does. 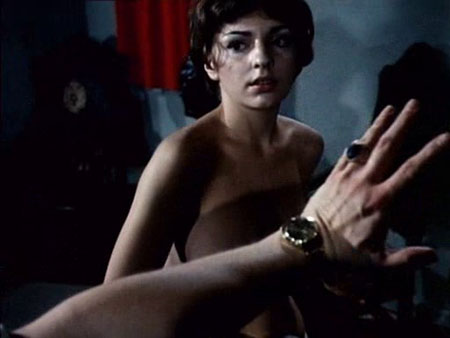 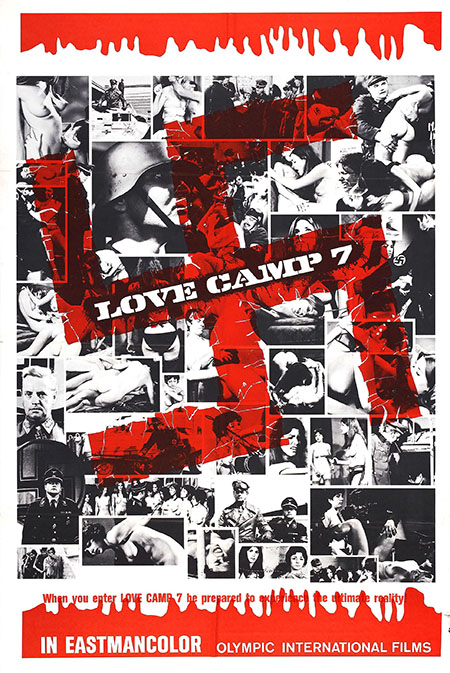 However, no matter how much he objects to the goings on in the camp, he insists on staying loyal to the Nazi cause. Ironically, it would seem this sympathetic character trait of an otherwise repulsive human would happen again in later films, such as how Ilsa is practically a feminist who just wants to prove that women can be strong soldiers. What a wild and crazy genre of film this is. 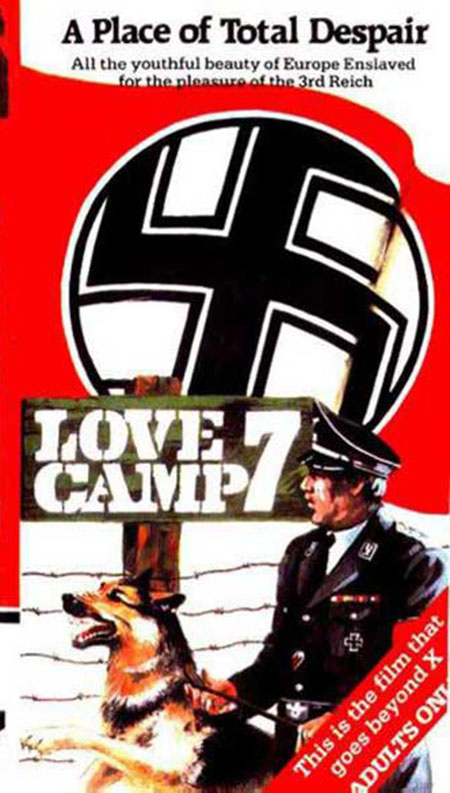 Love Camp 7 is an entertaining film and a catalyst for so much of the exploitation filmmaking of the 1970s. It is also one of the rare American-made Nazisploitation films. But don’t go into it expecting a polished gem, as this one is a bit rough around the edges. It is easy to be distracted by the nudity and sleaze of the film and miss the fact that not much is really happening. Effects work and set design are not the strong points of this film, nor is the acting or writing. All that considered, it is still enjoyable for diehard fans, both as an historical piece of filmmaking as well as another entry in the annals of Nazisploitation. There are others I’d put before it, but Love Camp 7 deserves a spot on your “films to be seen” list.