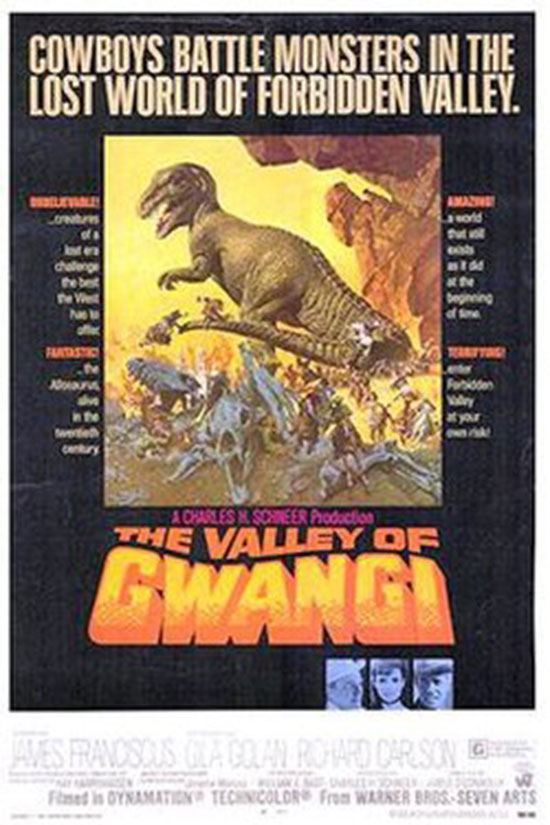 Cowboy James Franciscus seeks fame and fortune by capturing a Tyrannosaurus Rex living in the Forbidden Valley and putting it in a Mexican circus. His victim, called the Gwangi, turns out to have an aversion to being shown in public. Another film featuring the stop-action special effects talents of Ray Harryhausen.

Having come off of watching the entertaining Showdown in Little Tokyo followed by Pink Angels and it’s quite memorable ending, I was hoping that Valley of Gwangi would have something going for it. I don’t expect much from B movies, just that they be at least entertaining. Considering that this film has garnered a bit of a cult following, I would have thought this film would have at least been that. The elements for a good time were there: it had both cowboys and dinosaurs in it. The only way it could have sounded way more awesome is if it threw in ninjas for good measure. 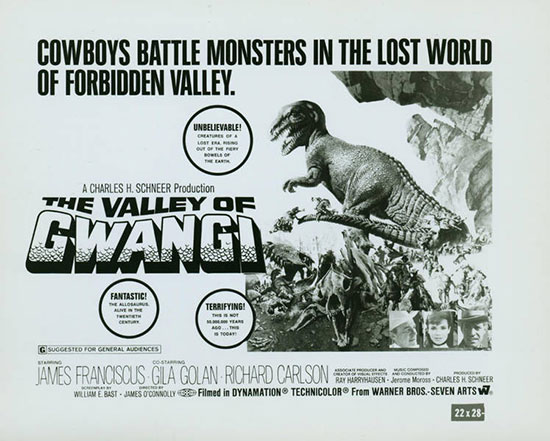 The movie centers on a James Franciscus, a fellow who travels to Mexico to convince his former lover, who works at a circus, to sell her prized horse to Buffalo Bill. However, he sees opportunity for making even more money when she unveils that she has a miniature horse that’s supposedly of species that’d been extinct for millions of years. Franciscus, his former lover, and a group of cowboys discover the hidden valley the horse came from and find themselves face to face with living dinosaurs. When they capture a dinosaur and bring it to the circus, things take a violent turn for the worse. Apparently no one stopped to consider that maybe, just maybe, having a giant carnivorous lizard around could be dangerous. 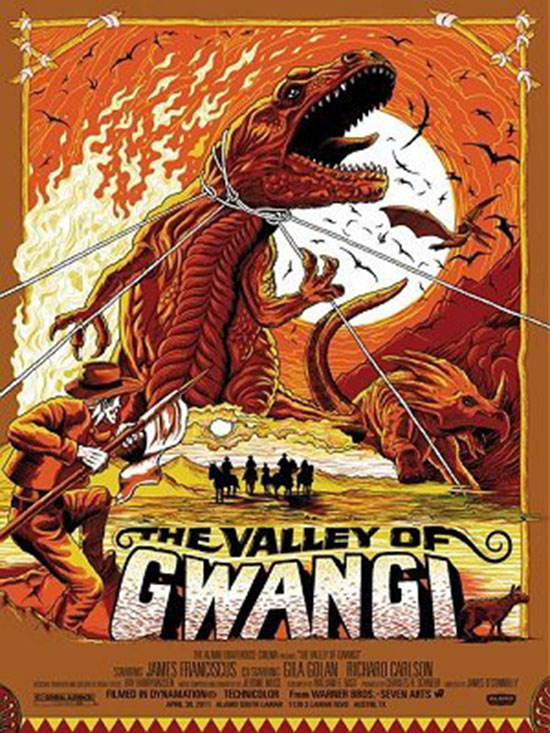 I honestly didn’t find the film all that compelling or interesting. I felt it took a while to finally get to the good stuff, and it felt to much like a dozen other movies of a similar ilk. It was just another riff on the concepts introduced in the book Journey to the Center of the Earth: you have people finding a hidden land that contains prehistoric creatures long thought extinct. Sadly, it was a concept that had been done to death by the time this film was released in 1969. The Valley of Gwangi even has a battle between a triceratops (or a similar dino) and a T-Rex, which I swear is something I’ve seen in every movie like this one. However, that in itself isn’t a problem. It just feels like the movie takes forever to get to that point, and the stuff leading up to that point I didn’t find all that interesting. I had a hard time caring about the main character, his struggles with the beautiful T.J., nor any of the characters. I think if the Franciscus character was a bit more charismatic and likeable, I might have actually cared more about what was going on. This was a movie that could have benefitted spending a little less time focusing on the characters and more time with the dinosaurs. 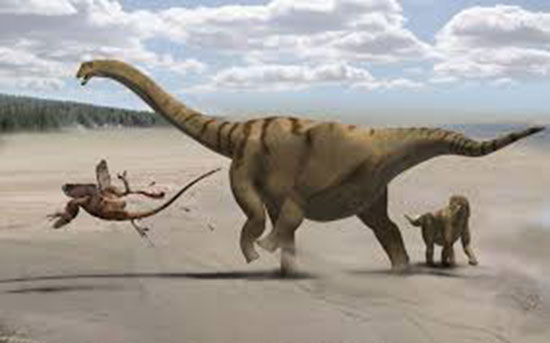 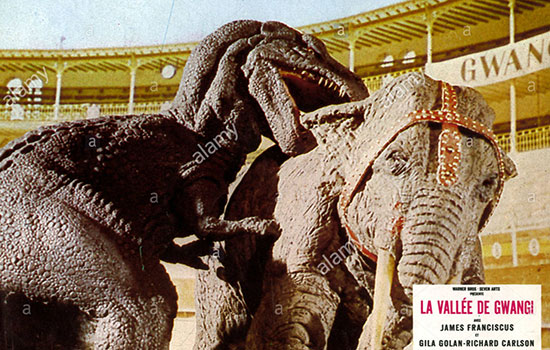 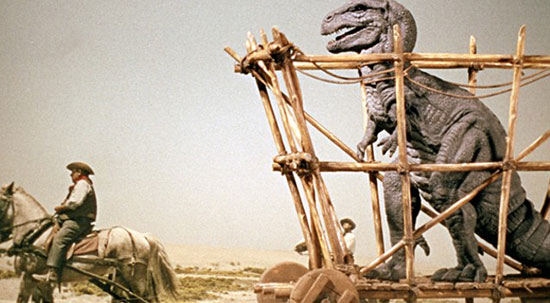 To give this movie it’s due, it does become much more interesting when the prehistoric creatures finally show up. Ray Harryhausen, the man who revolutionized the industry with his special effects used in such films like the original King Kong, provided his expertise here. The stop motion used for the prehistoric creatures in this film is the smoothest looking in Harryhausen’s career. They movements and integration into the film proper was almost seamless. Obviously, by today’s standard, it’s going to look cheesy. However, it’s easy to appreciate the level of skill if shows for a low budget film from 1969. The final act of the movie was really fun when we get to see the T-rex go on its inevitable rampage in the middle of a Mexican town. The special effects work in the film’s climax is where it really shines.

Special shout out goes to the scene where a vertically challenged gypsy sneaks into the dinosaur cage in the hopes of releasing it and things don’t go planned for the fellow. When the the T-Rex is finally unveiled to the public everyone gets to see it in the middle of eating the little jerk. Instead of being a moment of horror, it became scene of unintentional comedy to me. 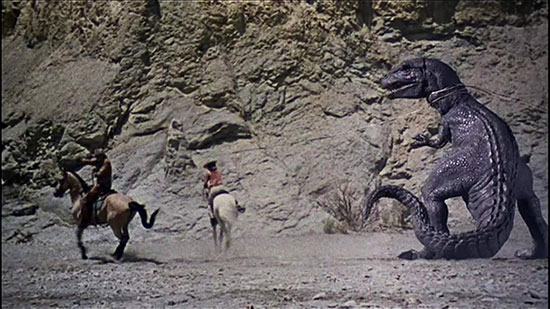 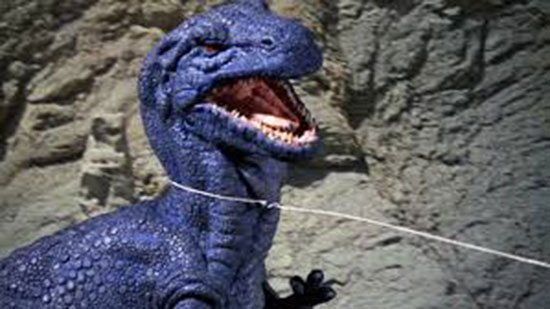 The acting was okay for the most part, and none of the actors were bad enough to drag the film down. The real problem is Valley of Gwangi sadly didn’t do enough to really capture my interest for most of its run time. I didn’t feel like the lead character was likeable enough, so I didn’t care about any of drama centering on him and his former lover.. The only time the movie showed a spark of life was when we finally got to the dinosaurs. Once that happened, it at least started to become entertaining with some wonderful special effects work. With that said, however, I still can’t recommend this one.