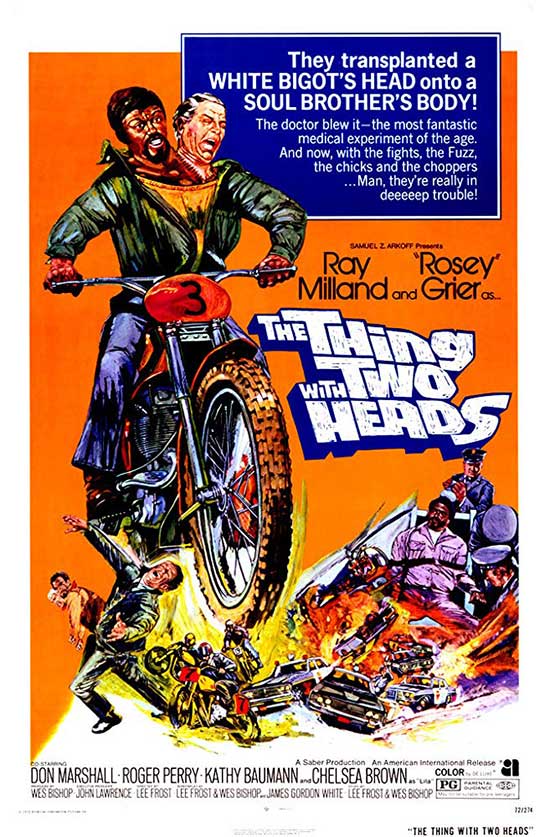 Doctors are forced to transplant the head of a dying, racist surgeon onto the body of a black death row inmate.

It’s been a little tough figuring out what I wanted to say about The Thing With Two heads mainly because I wasn’t sure if it was supposed to be some kind of comedy, action flick, or something in between. It didn’t help that I didn’t think it was particularly funny nor tense. It was just a movie that, while not boring, just instilled a feeling of ambivalence. That’s almost as bad as being boring. 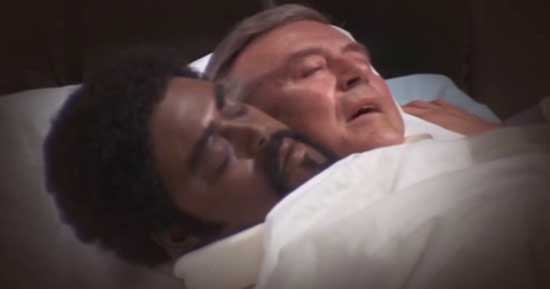 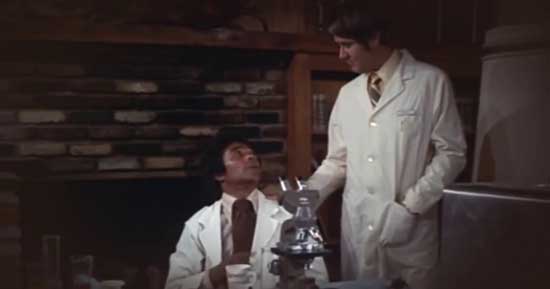 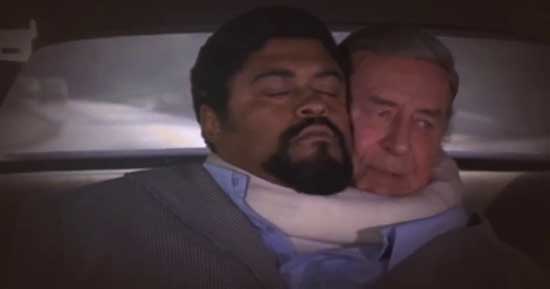 Ray Milland plays Dr. Kirshner, a racist surgeon who’s dying and wants to have his head transplanted onto another body to prolong his life. The doctors working with him are growing desperate, particular after Kirshner is injured after an experiment subject goes berserk. Along comes Jack Moss (Roosevelt Grier), an African American death row inmate desperate to prove his innocence. Moss sees a chance when he’s asked to take part in a medical experiment by Kirshner’s team, to which he agrees. When Moss comes too after the doctors perform surgery on him, he finds Dr. Kirshner’s head had been attached to his neck. Neither man is happy with this turn of events, and both end up fighting over control of the body. Moss escapes from the medical facility and ends up in a desperate chase with authorities as he tries to think of a way to evade the police and clear his name, but Kirshner is constantly trying to interfere and sabotage Moss’s efforts.

The main problem I had with this flick is that I wasn’t sure what the film was going for. It seemed like it was supposed to be a comedy, especially when it puts this strange goofy noise at the very end of the opening credits. However, I didn’t find anything particularly funny. The idea of a white racist having his head put on an African American’s body was rife with potential, but the most the film ever garnered from me was maybe one smirk. The scriptwriters and director should all hang their head in shame for having a concept that could have resulted in a lot of hilarious situations, yet they managed to squander every bit of it. It takes a special kind of ineptitude to drop the ball as badly as these folks did. I began to wonder if this film was intended to be a comedy to begin with. Or if it started out as something else and then someone went “Nah, let’s make this a different genre entirely.” 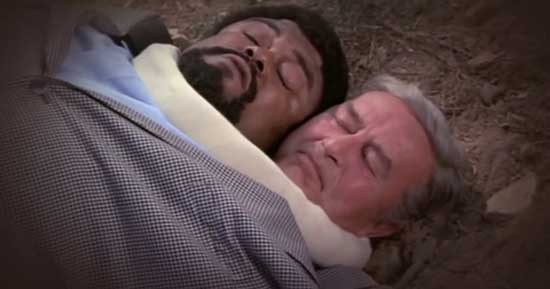 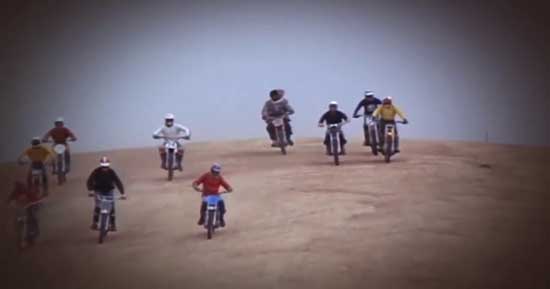 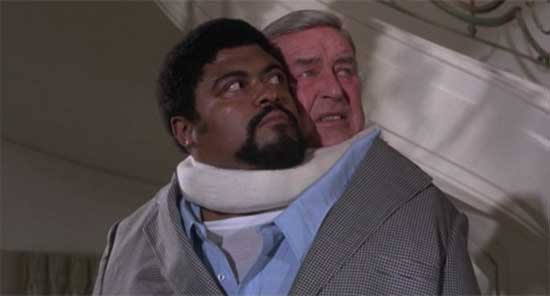 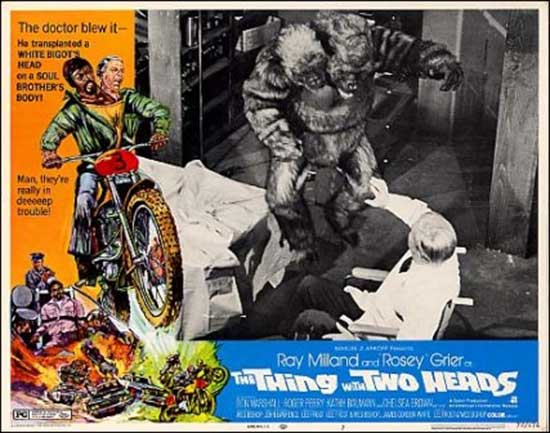 Now, the middle part of the movie involved Moss, with a heavily sedated Kirshner, trying to evade police in a drawn-out chase scene that involves the guy using different vehicles throughout. Normally this could be a source of excitement, but honestly, the movie kind of lost my interest in its failed attempts at humor by this point. The action wasn’t boring, but it wasn’t anything I hadn’t seen done before. For some reason, it just didn’t work for me here mainly because it didn’t seem to fit. One moment it’s a failed comedy, the next moment it’s like it’s trying to be 1971’s Vanishing Point. I will give the flick some credit to have some decent enough stunts and moments that made this section of the film entertaining. While it didn’t add anything new in the history of chase scenes, it at least was adequately done. 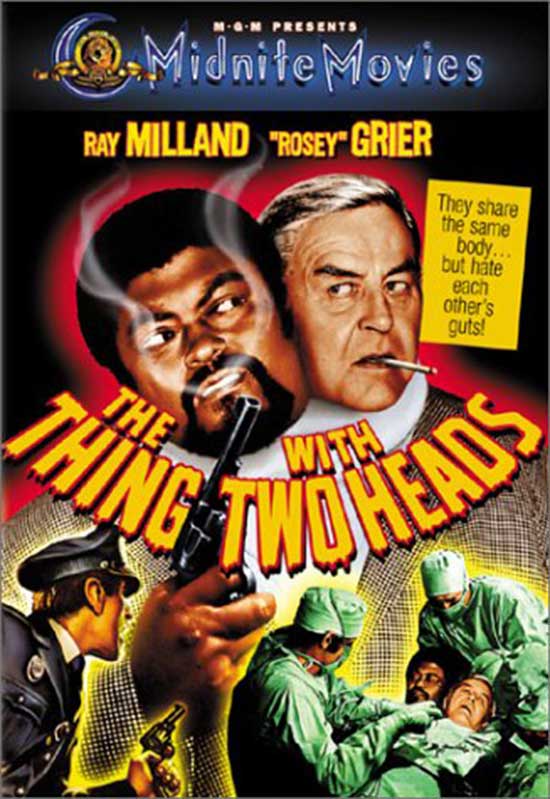 The strong point of the film was actually the actors. The majority gave pretty good performances. Ray Milland was a bonafide movie star, having been one of Paramount’s bigger draws during the 1930’s and 1940’s. I respected the fact that while he was in a low budget film, he still gave his all to his role as the wholly unlikeable Kirshner. He was a cantankerous bigot who had no interest in changing his view of people he considered beneath him. His one and only concern was his own continued survival, regardless of whether it meant someone else’s death. Roosevelt Grier was just as good as Moss. He was believable with how he portrayed a desperate man trying to prove his innocence to avoid a death sentence. Having Milland and Grier play off each other was one of the few good things in The Thing With Two Heads. They had great chemistry and their constant bickering with one another was fairly amusing for most of the run time. Their struggles with each other were the closest to being genuinely funny this movie ever got. 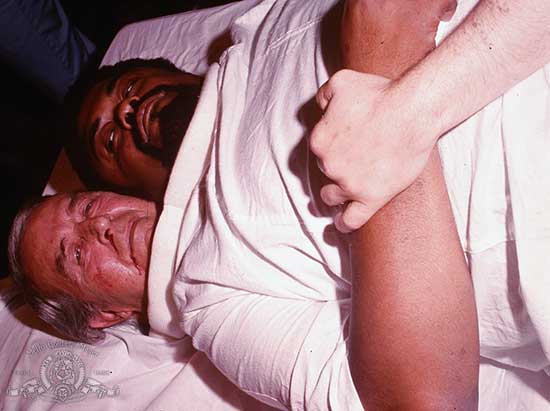 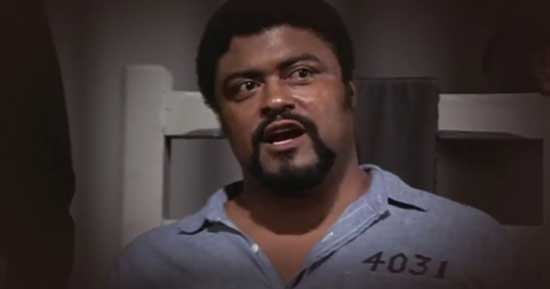 To sum it up, I can’t bring myself to recommend this movie. It was a great concept that could have led to some hilarious moments if the filmmakers involved were more capable. It was a strange movie that was trying to mix two or three genres and not doing any of them well. It’s not the worst movie you’ll see, but it’s still not good. It might offer some amusement, but not enough to warrant anyone wasting their time on. There are much better films to waste your time on, even in the B-movie catalog.