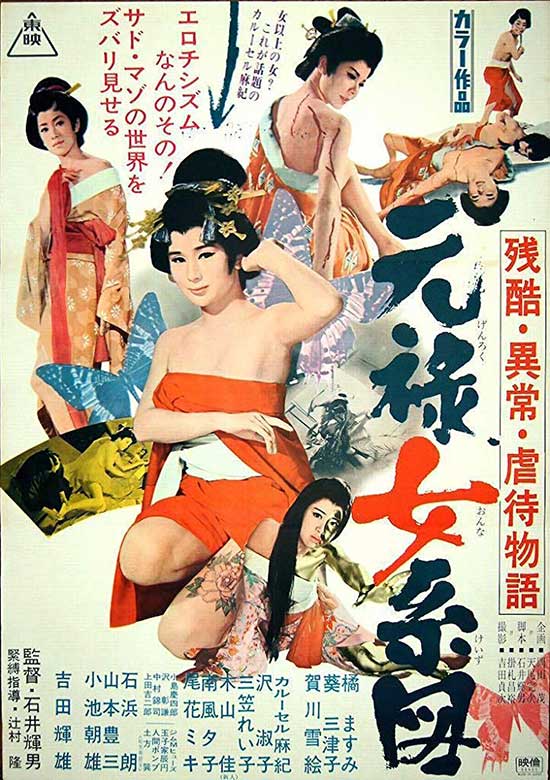 A collection of stories dealing with punishment towards women.

Filmmaker Teruo Ishii has been called the “Godfather of J-sploitation,” the “King of Cult,” and even “the Japanese master of all things taboo.” His body of work has influenced a number of genre directors, names like Takashi Miike (Visitor Q, Ichi the Killer), Ainosuke Shibata (Hitch-Hike, Lipstick), Takao Nakano (Sexual Parasite: Killer Pussy, Hop Step Jump!), and so many others make up the long list of filmmakers whose work indirectly descended from the legend. Ishii directed just short of 100 films from 1957 to 2001, temporarily retiring in 1979 only to return to film in 1991 at the age of 67. He was the definition of “grindhouse,” cranking out movie after movie – from 1964 to 1970 alone, he released 33 movies, an almost unheard of number. Yet somehow Ishii’s films have been mostly overlooked and unnoticed outside of Japan. Arrow Films is doing their best to correct that by releasing a number of his films, one of the more recent being 1969’s Orgies of Edo.

In part one, Oito (Masumi Tachibana; Yakuza Law, Mankiller) is being threatened by some bad people to whom she owes money when a random passerby named Hanji (Toyozo Yamamoto; Ballad of a Worker, Yakuza Law) steps in and roughs them up. The two get close, and Hanji gives her the money to get out of debt, only to return later and say he’s in trouble and needs the money back. He somehow convinces the modest Oito to work as a prostitute in order to make the money back, and this might be the least cruel thing he does to her. Turns out, he’s been working with the guys he “chased off” the whole time, and now is not only stealing Oito’s money, but also sleeping with her sister, Kinu (Kei Kiyama; Horrors of Malformed Men), who is also in on the scam. Things only get worse, leading to sadistically brutal ends for many of those involved…and somehow this is the tamest of the three parts!

Part two tells the story of Ochise (Mitsuko Aoi; Horrors of Malformed Men, Worship of the Flesh) and the man who loves her, Chokichi (Akira Ishihama; Kobayashi’s Harakiri, Fireworks Over the Sea). If the first part was the tamest, this one is definitely the kinkiest. Chokichi wants so badly to be with Ochise, but she is just not interested in him. Adding insult to injury (in Chokichi’s eyes), the guys she does want are everything he’s not. She pays two dwarves from the circus to “rape” her, she gets with an ugly man, and a fat man, she even asks Chokichi to import her a big black man (for real, a black dude is delivered to her in a crate). When Chokichi brings her to a doctor to find out what’s wrong with her (because obviously there’s something wrong with her if she doesn’t want him, right?), she is hypnotized and we learn why she is into the things she’s into. This makes Chokichi take some truly drastic actions in the deranged hopes of finally winning her heart.

Part three easily wins the “most brutal” award in this trio of stories. Veteran actor Asao Koike (Throne of Blood, Shogun’s Ninja) plays an absolutely horrible man who gets off on torturing, maiming, and killing women. The segment opens with him on a horse, dragging a woman to her death, then cuts to an insane scene where women in red dance for him before bulls with flaming horns are let into the room, leaving the women the choice of stripping nude or being gored. Omitsu (Miki Obana; Inferno of Torture, Shameless: Abnormal and Abusive Love) manages to catch his eye, and he takes her on as a “partner,” tying her up and hanging her upside down in his room. Eventually she upsets him, as we assume all women do, and he has her entire body painted gold. This will kill her sooner than later, but she manages to convince him to spare her by promising to deliver a sadistic game of her own that he will love. He falls for it, and what transpires to close out Orgies of Edo is something that nightmares are made of. 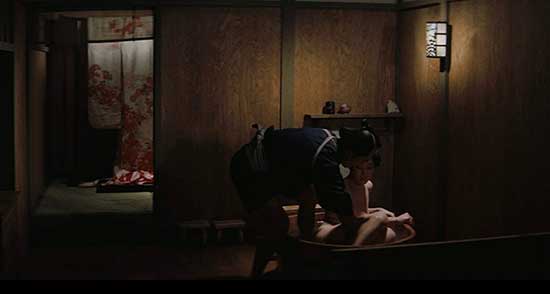