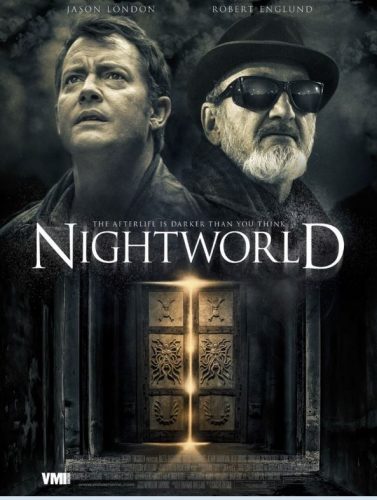 When former LAPD officer Brett Anderson takes a job as head of security at an old apartment building in Bulgaria’s capital, Sofia, he soon begins to experience a series of bizarre and terrifying events. Once he begins to delve deeper into the building’s sinister history and investigate its shadowy owners and past employees, Brett soon uncovers a malevolent force nestled deep in the bowels of the building that will do anything to be set free into our world.

If you’ve made your way through the bargain bins of any DVD store, or flicked through the horror section of your favorite streaming service, you’ll be aware of the films that overzealously promote their one true star over the rest of the cast and, indeed, the actual lead. Look at any VOD film ‘starring’ Danny Trejo, Steven Seagal and even – sigh – Bruce Willis (What happened man? Your ass used to be beautiful).

The reason I bring this is up is that there will be many running to Nightworld due to it ‘starring’ Freddy Krueger himself, Robert Englund. And whilst the artwork may show him sharing equal status with co-star Jason London, the fact of the matter is you’re going to be waiting quite a while before you see him. ‘But, hey,’ I hear cry. ‘As long as the film’s good, eh?’

London (Dam Sharks) plays Brett Anderson, a former LAPD officer living in Europe. Having just recovered from a series of terrible events, Brett agrees to take on a security job looking after an apartment block in Bulgaria. His boss, Martin (Blood of Redemption’s Gianni Capaldi), tells him the job is simple; keep an eye on the building’s basement and reporting back anything mysterious he says via its CCTV. Martin seems completely terrified of the building from the get go, but this doesn’t seem to bother Brett who sluggishly leaps at the chance of a job.

Perhaps attempting to imitate, or simply being influenced by, Fulci and Argento, Nightworld is a European ghost story where nothing makes sense until director Patricio Valladares wants you to understand. And he is going to make you wait a really long time. Really long. Like, this is a 90-minute film and you’re not going to get a pay off till the last fifteen minutes. For the rest of the time, Brett wanders the building’s corridors, listening out for things that go bump in the night. During the day, he’s flirting with Zara ((Lorina Kamburova), a barista whose main part in all this is to look hot. So, we’ve got wandering around corridors and attractive people working in cafes. Are you scared yet?

To be fair, Nightworld is trying to play the long game and, admittedly, the film looks gorgeous. However, it really is for naught. By the time the film decides to do something interesting, it’s already too late. Things do pick up once Englund belatedly enters the picture as Jacob, a blind consultant hired to help Brett when he finally sees something on camera that’s worth reporting. Englund brings some genuine drama to film, trying to maintain his composure whilst the very fabric of reality around him begins to tear. It’s always nice to be reminded that Englund is more than a spiky glove and striped jumper, that he can project dialogue that’s not just built out of puns.

Which makes it all the more of a shame that he does very little here. As mentioned, Jacob is a consultant, so it feels like Nightworld missed an opportunity to follow the more interesting character out of him and Brett. There’s a spinoff movie here waiting to happen as Englund is dropped in various European cities helping mysterious societies and cults, getting into a pickle over an evil text; that sort of thing. Alas, that is not to be the case and so we must follow the shabby Brett as he gets his end away with Zara and stares at a door for a long time.

Beautifully shot – though it’s never clear why we have to be in Bulgaria outside of it being cheap to film there – Nightworld could have a been a Lovecraftian tale of one man starting into the abyss. Instead, it’s a rather tepid drama about a man overcoming the death of loved ones, which suddenly remembers it’s a horror film just before the credits roll.