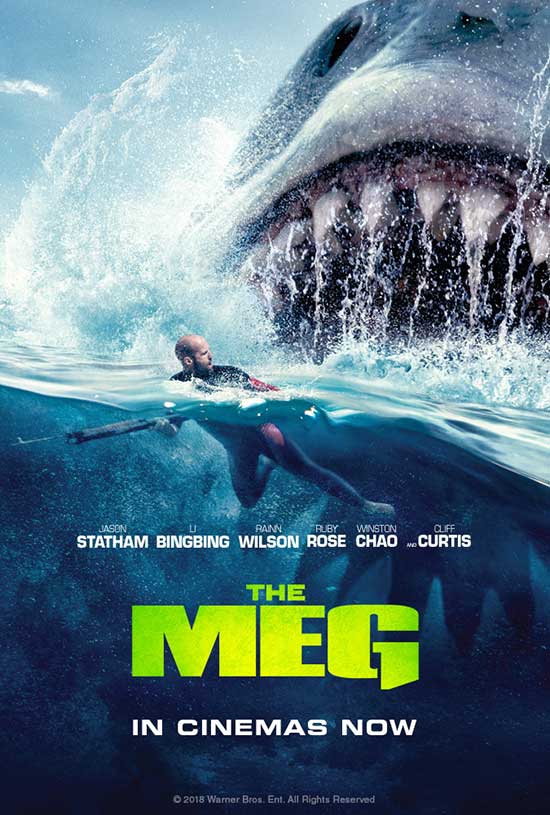 When a submersible lies disabled at the bottom of the Mariana Trench, an expert deep sea diver is forced to confront his fears and risk everything. Could the Megalodon still be alive

I admit to having a soft spot for Jason Statham movies. “A bog in the west of Ireland,” as late comedian Dave Allen would have concluded, but that’s not true for me. I do not look to Jason Statham to headline films like “Phantom Thread” just as I could never imagine Daniel Day-Lewis starring in the “Crank” films.

Statham’s films are basically similar to eating enough cotton candy (or fairy floss) to fill a 30-gallon trash bag: It starts out fun and familiar, then you get all hyper and bouncy, followed by a feeling that you’ve had enough to last you for a while. Not a bad thing as most of his movies have the good graces to wrap up before they start leaving a bad taste in your mouth, unlike the cotton candy. 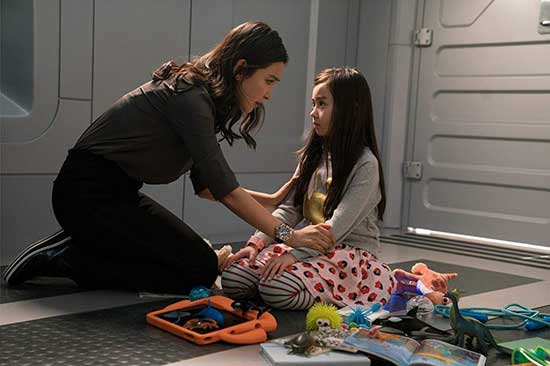 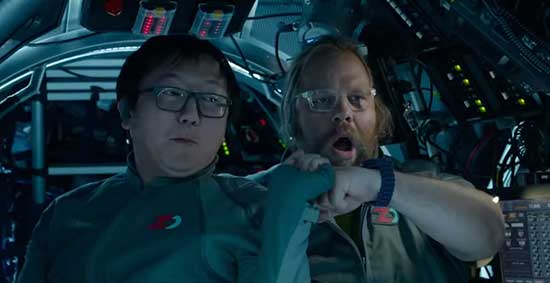 That is, if you can tolerate Statham. If you cannot, I understand.

Does Mr. Statham shoot, beat, slice, and maul bad guys by the dozens in his most recent endeavor? Nah. He’s done that to death. Now he is duking it out with Nature’s favorite silent assassins – sharks. But not just any old shark; he faces off with “The Meg”.

We get a sense of the impending epic battle in the opening set piece as Statham, playing Jonas Taylor, and his men attempt to rescue the crew of a disabled sub that is deeper than any such rescue has ever been performed before. While hauling an injured submariner back to the rescue sub, Jonas witnesses the side of the damaged ship deform under the impact of something very large and very unhappy that can survive in such deep waters. Knowing he has only two options, he opts to save the 11 crew members already in the rescue vehicle while leaving behind his own men, both friends of his. The damaged sub explodes mere moments after Jonas has detached from it.

Foreshadowing firmly in place, the film jumps ahead five years to a crew seeking to discover if the bottom of the Mariana Trench is really the bottom of the ocean or are there even deeper levels. Of course, the supposed bottom is really a thermal layer that hides a biome with naturally-heated waters and creatures new to Mankind. Unfortunately for the 3-person crew of the sub, something very large (foreshadowing pays off, doesn’t it?) damages their vehicle, and they find themselves trapped even deeper than the sub from the opening. 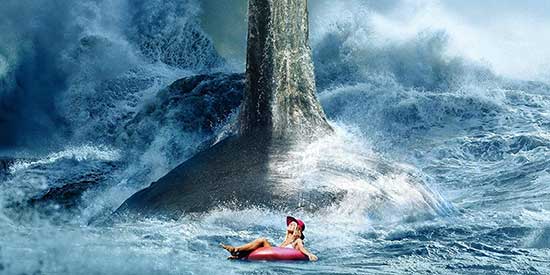 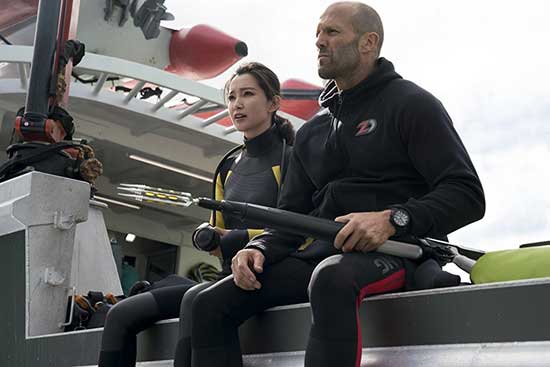 Guess who the only person capable of performing the rescue might be. Yup, the crazy Jonas who was relieved of his command five years earlier due to fears that he had imagined the attack by an unseen creature and his negligence resulted in the deaths of those still on the wrecked sub.

The upshot of all of this convolution is that Jonas breaches the thermal barrier in the Trench which allows a megalodon to escape from the super-heated primordial area of the ocean it had been calling home for who knows how long. Once the Meg realizes it has a whole new buffet to select from, it responds to all the noise we silly humans make, and it starts wrecking boats, chomping endangered whales, and whittling down a cast that seems extra bloated to provide more thrills and sudden deaths for your buck. 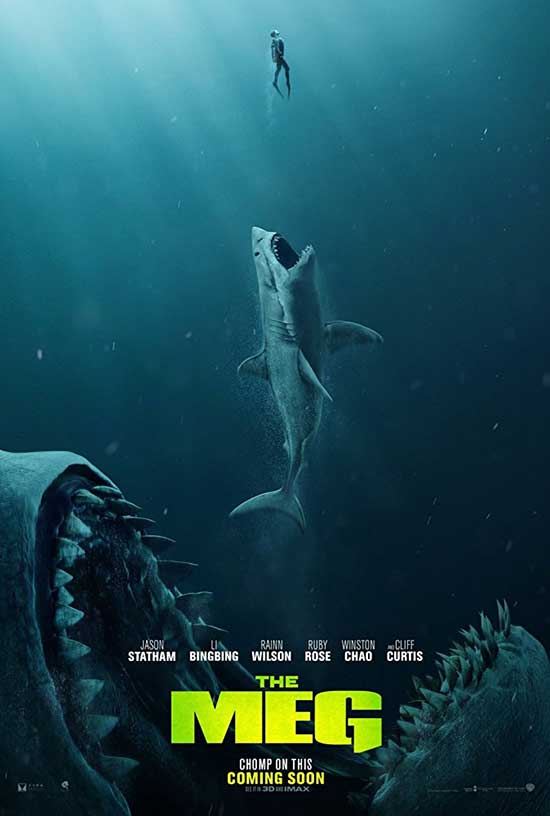 While watching this movie, I felt like I was watching something familiar. Yes, I know, “Jaws” and all the other shark-fest movies out there. What I’m talking about is the reason I tend to like Jason Statham movies; they are visual comfort food. You know what you are getting even if you never watched the trailers (which actually show you the final death blow of the film if you know what to look for). You can safely disconnect your brain and let testosterone and a cute kid entertain you while giving you a bit of thrill with a massive shark wrecking everything it is attracted to.

Is it remotely plausible? No, but at least they make enough sense out of their nonsense and throw lots of action set pieces at you to keep you from thinking things like, “If the Meg didn’t escape until Jonas ruptured the thermal layer halfway through the film, what the hell attacked the submarine during the opening?” Or “What kind of facility allows a little kid to block a main hallway with her toys practically right in front of the ONLY door for the Command Center?” Or “If you are getting reports of the Meg sinking multiple boats in mere moments, why in Hell would you go that location IN A BOAT?!?!” 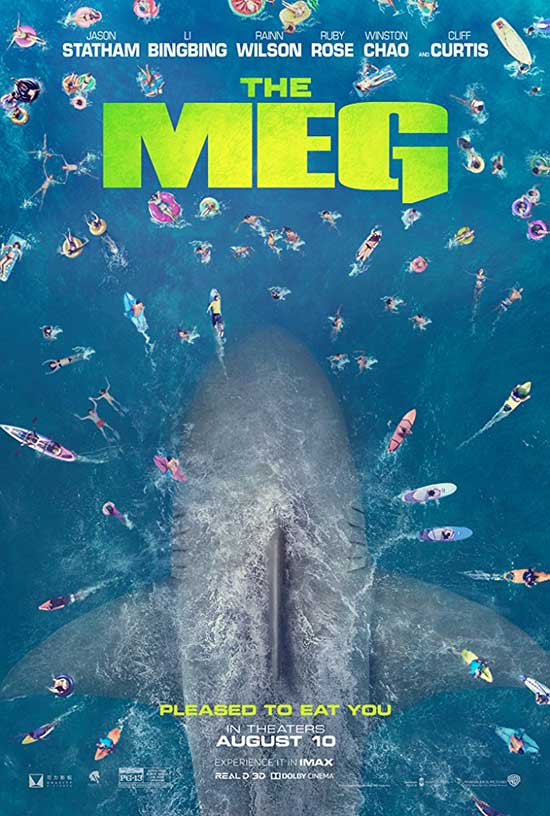 Face it, you don’t watch Statham movies for hard-hitting scientific accuracy. “The Meg” is good at being exactly what it is, a fun bit of eye candy to scramble your brain for a couple of hours. Expect anything more, and you might as well just wait for the next Shark Week.