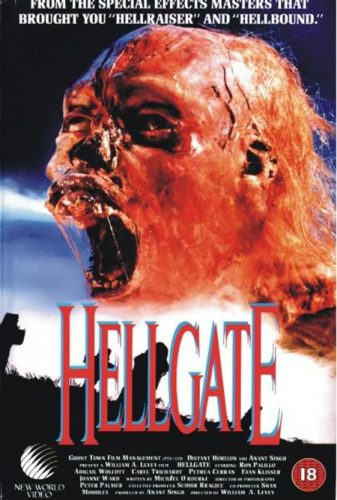 Four friends discover that an urban legend about a seductive phantom hitchhiker is no myth. Now the spectral beauty is intent on loving one of them to death. To lift the curse they must venture to an abandoned ghost town and face a parade of zombies and evil spirits. It’s a deranged paint-huffing Evil Dead wannabe from the director of Blackenstein and Wham Bam Thank You Spacemen.

Movies that effectively capture and dwell in a dreamlike state are few and far between; I’m talking about those rare gems like Daughter of Horror (1955), El Topo (1970), Valerie and Her Week of Wonders (1970), Phantasm (1979), Lemora: A Child’s Tale of the Supernatural (1975), Eraserhead (1977) or (to a far lesser degree) Tourist Trap (1979). Films that are seemingly shot through the filmmaker’s mind’s eye, immersing you in their own distorted vision of reality. I’m still not sure if the creators of 1989’s Hellgate were attempting to join this “mile high” club or if the filmmakers were so out of synch with the real world and coherent storytelling that the film’s onionskin layers of bizarreness just happened naturally. Either way, Hellgate is a horrendous example of dollar store surrealism shot in South Africa (doubling as the USA) that’s strangely hypnotic on a purely wrongheaded level. 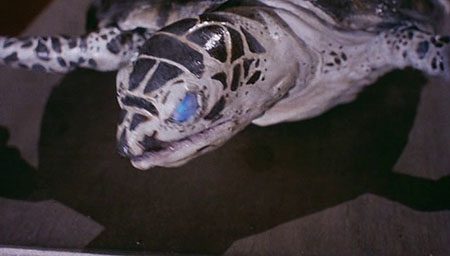 Let’s get the plot out of the way. A trio of college students staying in a mountain cabin awaits the arrival of their friend Matt. They pass the time telling ghost stories and urban legends, including the tale of the mysterious “Hellgate Hitchhiker” who, according to the legend, is the vengeful ghost of a woman killed by bikers back in the 1950s. Her grieving father was the owner of a tourist ghost town named Hellgate. 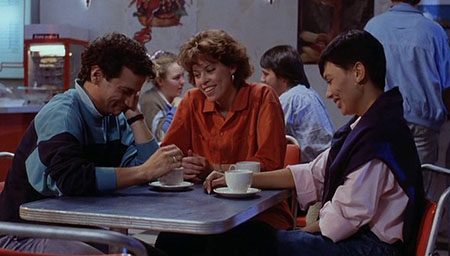 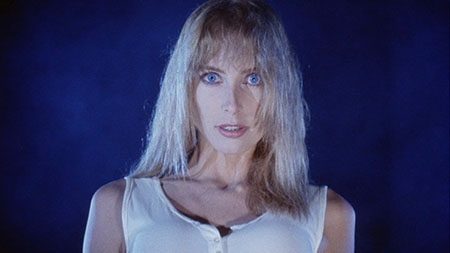 When he discovers a gem with magical powers he uses it to resurrect his beloved daughter. He then forces her to pose as a hitchhiker, luring single men to the now abandoned Hellgate, where he turns them into zombies or ghosts or something—the motivations are a bit murky. Matt, played by Ron Palillo (best known as Welcome Back Kotter’s Arnold Horshack), encounters the seductive phantom hitchhiker. After barely escaping with his life he races to join his three friends. The moronic quartet then set out for Hellgate to solve the mystery once and for all. Upon arrival they encounter ghosts, zombies, phantom can-can dancers and magicians—I don’t mean occult magicians, just the plain old birthday party variety. 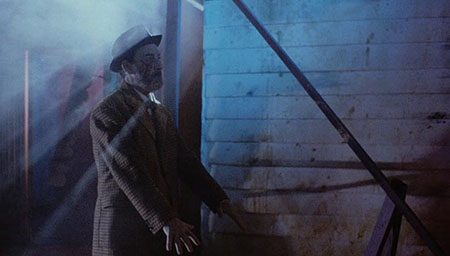 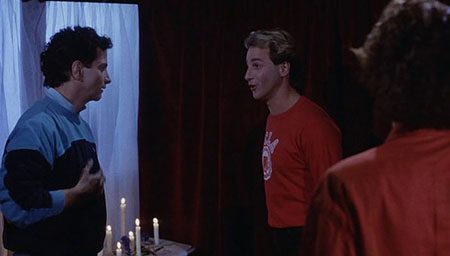 None of this is remotely scary or coherent but the sheer volume of poor decision-making by the filmmakers is staggering. All I can do is share some choice moments and let you decide if you’re going to take the plunge.

The opening flashback is set in the 1950s, but the costume designers must have looked at The Wild Angels instead of The Wild One for costume reference because the biker’s wardrobe is at least a decade off.  It’s possible the South Africans didn’t know the difference, but American director William Levey knew full well what fifties era bikers should look like—he’d even directed the period film Slumber Party ’57.  But he chose to ignore reality while scoring the scene with 1950s style music. It’s just bizarre. 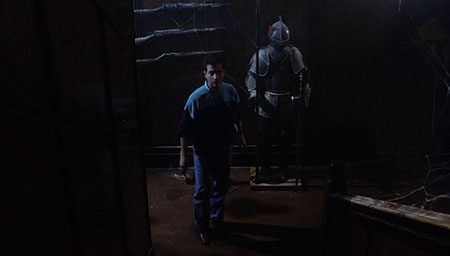 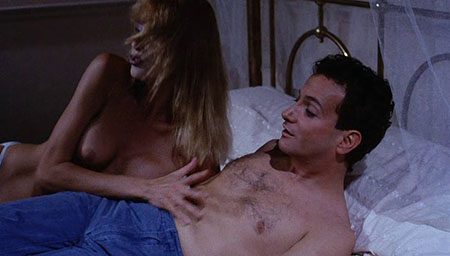 The ghostly hitchhiker’s attempt to seduce Palillo is equally uncomfortable, mostly because her speech and behavior give the impression she’s gobbled down about 14 Seconals and a liter of vodka. Their passionate kiss is hard to describe, it’s like two people intimately entwined while still trying to avoid each other. And when her father bursts in, why doesn’t she make any attempt to cover her bare breasts?  The whole direction and acting in this scene is just bizarre.

The incoherent script isn’t helped by some actors’ strange staccato line delivery. It feels like English was an alien language to them, yet all white South Africans spoke English and Afrikaans with equal fluency (it was a law). If you’re thinking this strange cadence is due to a foreign director, guess again. William A. Levey was an American who previously directed such gems as Blackenstein (1973) and Wham Bam Thank You Spaceman (1975). It’s just bizarre.

We now move on to Hellgate’s most notorious moment—Ron Palillo’s nude scene. Yes, Arnold Horshack gets naked with his lady.  I’m not mocking Palillo for doing the scene; I’d like to think the actor was showing solidarity with his leading lady who was contractually forced to bare all.  But I question the filmmakers for shooting an extended nude scene with a guy who, no insult intended, nobody wanted to see naked—I mean this scene goes on for about four minutes, including a fleeting glimpse of his horse-sack. It’s just bizarre. 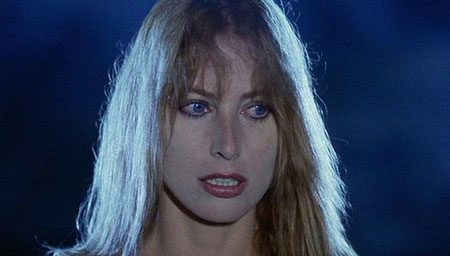 I’ve only dragged you about twenty minutes into Hellgate, but rest assured the creative decisions only get more erratic. Why do characters ask obviously rhetorical questions, only to have other characters try to answer them? Why are terrible running gags repeated to the point of being a war crime? Why do our two reasonably sympathetic leads abandon their friend in the middle of Hellgate when she develops a minor limp? Why do legions of zombies appear, offering viewers a ray of hope, only to vanish again? What the hell is going on for the final twenty minutes? Trust me; Hellgate is a handcrafted train wreck from top to bottom. There’s no ranking system to describe Hellgate—just strap it on if you’re ready for a surrealist disaster that transcends standard bad film riffing.

But not everything about Hellgate is negative because there were a couple of pretty interesting people involved.

You might be wondering who put the money together for this hypnagogic disaster. Hellgate was an early work for pioneering South African producer Anant Singh who produced dozens of exploitation films in his home country. He was also an outspoken opponent of the brutal, racist Apartheid regime—a dangerous opinion in a right wing country where the Bureau of State Security (BOSS) made troublesome people of all colors vanish. Singh’s Indian ethnicity made him especially vulnerable in this white supremacist state. Between potboilers like Hellgate and Bedroom Eyes 2 Singh produced the genuinely life affirming film adaptation of Sarafina (1992) and was personally endorsed by no less than Nelson Mandela, who granted Singh his life rights. That’s pretty cool. 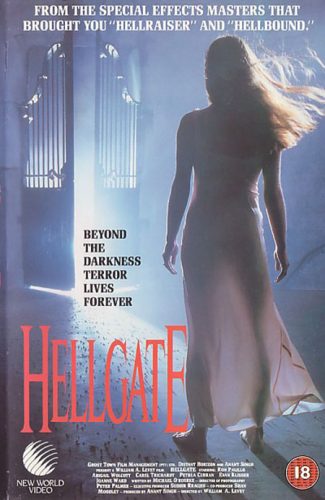 Plenty of television specials and websites joke about how Ron Palillo’s acting career failed after Welcome Back Kotter. But they rarely mention that he went on to teach high school dramatic arts and was adored and admired by students and educators. He also had a 41-year-long relationship with his life partner, lasting right up until Palillo’s death in 2012. Not exactly a career or life I’d term a failure. 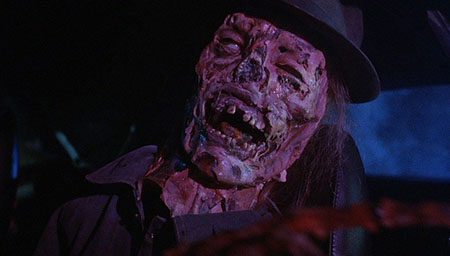 So, if you dare, try spending ninety minutes under Hellgate’s intoxicating spell and then give a little round of applause for Anant Singh and Ron Palillo, two guys who made a difference in people’s lives.