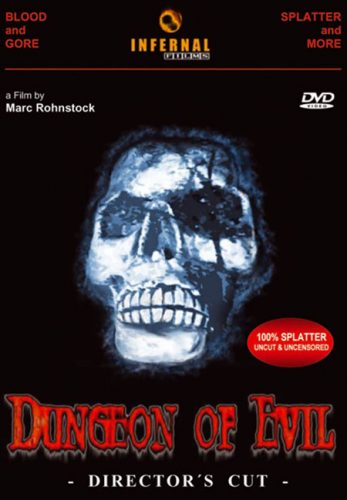 Several tourists get lost and decide to seek help in an old basement, they don’t know but they are invading the place of a hermit murderer, who has the power to turn its victims into guts and bloodthirsty monsters.

If you’re a fan of German horror films, then the name Marc Rohnstock is probably one you’re quite familiar with. He’s kind of done a little of everything in the independent horror film world, from stunt coordinator and cinematographer to location manager and production driver. He’s appeared on screen in the films of Timo Rose, Andreas Schnaas, and Marcel Walz, to name just a few, including a small role in the recent remake of Blood Feast. Above all of that, he also writes and directs movies. And today we’re going to go back to the beginning, before Necronos, before The Curse of Doctor Wolffenstein, back to 2005 to revisit his debut on the scene, Dungeon of Evil.

As is so often the case, there is a house out in the woods, and within its walls is something evil. This is how Rohnstock’s debut film begins, and we don’t have to wait long to discover what form the evil has taken, as we quickly find ourselves in a basement (or what is perhaps better described as a dungeon) alongside two captives. They are bloody and beaten, having been tortured before we got there, and they only get bloodier when a hulking man (Timo Fuchs, Goran from Necronos) enters the room. Soon ears are sliced off, fingers are removed, and when one of the captives is force fed what I can only assume is a plate of guts from a previous victim, we realize there is something supernatural going on here. At first we mistake the poor tortured fellow to be dead, but soon we are confronted by a man either possessed or zombified – either way, hungry for flesh.

At the same time, we follow a couple guys who are driving through the woods, possibly lost, possibly looking for friends they are supposed to meet up with. They pass right by a hitchhiker, leaving him in the middle of nowhere, and eventually stop at a house that, for whatever reason, they decide to break into. You can probably guess what happens next, as it is the thing that almost always happens in movies featuring this set up. So, unless you’ve never seen a horror movie before, and you’ve now decided to start with Dungeon of Evil, there isn’t much mystery to this film. But honestly, I don’t think that was ever the filmmaker’s intention anyway. 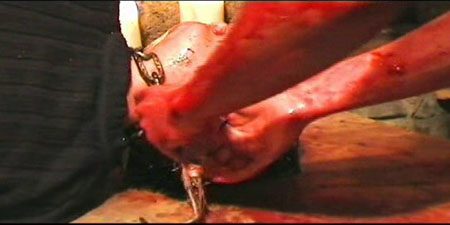 Dungeon of Evil isn’t a plot-driven horror film, nor is it full of twists and turns to keep the audience guessing. Rather, this is the debut film from an independent filmmaker, and it establishes him as a new face in the German splatter film universe. This is also the first release by Infernal Films, an independent film production company based in the United Kingdom that has gone on to release movies like Unrated: The Movie, Game Over, and James St. James Presents Avantgarde, among others.

And, to be honest, this serves quite well as a vehicle that showcases Rohnstock’s effects work. Where the film lacks in plot depth, it makes up for in blood and gore. There are literal buckets of viscera on screen at times, and so many body parts removed using a variety of weapons. Let’s just say, “Hammer Smashed Face” is more than just a Cannibal Corpse song title.

Dungeon of Evil is far from perfect, but it also needs to be looked at in context. This is Marc Rohnstock’s very first film, and we know that he has gone on to make much better films ever since. And despite its low budget, it still features some promising effects work, and one can only imagine how they would look had he been working with even a little bit of a budget. While there are, unfortunately, no English subtitles here, we non-German speakers can still follow along just fine.

This is a film for fans of the German horror tradition of splattered gore and brutal kills. It might not appeal to all audiences, given the repetitive formula of the action, but for collectors and underground film lovers, I recommend it wholeheartedly.