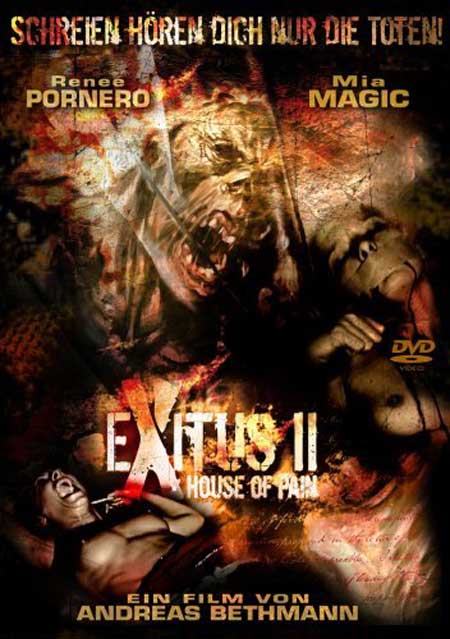 2 years have passed since the terrible events in the exitus house. Sophie, the sister of the dead monique, suffers from the fact that the body of her sister has never been found. Together with her friend Lena, she makes her own research and discovers a terrible secret in the former murder house!

Exitus Interruptus II: House of Pain picks up just a little bit after part one, and we meet Sophie (adult film star Mia Magic) and her friend Lena (Natscha Wetzig, who has appeared in a handful of Andreas Bethmann films). Sophie’s sister is Monique (Anja Gebel, a regular of German splatter films), the blonde from the first film who found herself abducted and held in the creepy house by a masked psychopath, and wants to find out what happened to her – they never found a body, only blood. Unfortunately, the only person who might know what really happened was Monique’s girlfriend, Manuela (played by Renee Pornero, adult film star, if you couldn’t tell by the name), who was also held in the house, but she was so wracked with grief after the incident she took her own life. So Sophie and Lena decide to muster up their courage and go check out the house in hopes of finding a clue as to whatever happened to Monique. And then everything goes really bad for them really quickly.

As you might expect, once Sophie and Lena reach the house, they find plenty to scare them – strange noises can be heard, possibly a woman and a baby crying; there is a locked door covered in barbed wire which leads to an upstairs that might hold clues; there’s even what appears to be a ghost, a skeleton in a wedding dress, floating through the house. All of this apparently arouses them, as they quickly find themselves naked and in bed together, “comforting” one another. But their sexual ecstasy only lasts so long before they are waking up in a room they don’t recognize, nude and bound. The twist that follows is unexpected and exciting, and leads to a long, dark path of torture and sadism.

I’ll be honest, I’ve been kind of split as far as my opinion of the work of writer and director Andreas Bethmann goes, and I’ve said as much in some of my reviews. But Exitus Interruptus II: House of Pain (let’s call it Exitus II for short) kind of impressed me. It is still as sleazy and dirty as his other films, which has never been the problem anyway, but this one has a creepy premise to it that I can’t fully divulge here without dealing in spoilers. We’re back at the house from the first movie, which means the chilling atmosphere is back – the dolls hanging by barbed wire, the presence of corpses in a very Texas Chainsaw Massacre or Psycho kind of way, it’s all in there, plus more. Luckily, now there is a well-written story that goes along with the visuals, a well-edited story, I might add, and we’ve even got ourselves some English subtitles to help us along.

For fans of Bethmann’s work, you’ll be happy to know he’s still operating with the same formula as he always has. This film is full of bloody deaths, sadistic characters, and completely naked women covered in blood and gore. Most all of the cast is women, in fact, with the exception of a guy who sneaks into the house with a prostitute and (*spoiler alert* albeit a minor and expected one) almost instantly has his penis chopped off. We even get more of the sadistic games, much like in the previous film, but this time slightly less hardcore (note: this film is just over 90 minutes long, and while many of Bethmann’s films also have an extended, hardcore cut, I can’t say for certain if this film does or not). That being said, there’s still a lot of very uncomfortable abuse of female genitalia here, so as with all Bethmann films, and most German splatter films really, this is not for the squeamish.

Exitus II unfortunately isn’t one of Bethmann’s films that features effects work done by Olaf Ittenbach, but rather the blood and guts and nasty stuff are all done by Bethmann himself. And while the director does a better job here than in some of his earlier films, there’s really no comparison to Ittenbach’s work. Luckily, a lot of the story is driven by the disturbing nature of the depravity on screen, so it gets by with a passing grade in this category. The acting works fine for the film, and while there are a couple of hard to believe stretches here and there, the story is very entertaining. While Exitus Interruptus is a great introduction to the work of Bethmann by way of the sleaze factor and the gore factor, Exitus Interruptus II: House of Pain might be the tightest story he has yet put to film.