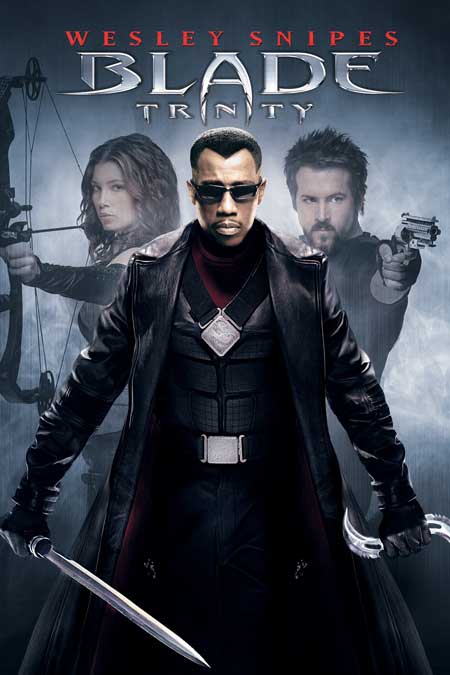 Blade, now a wanted man by the FBI, must join forces with the Nightstalkers to face his most challenging enemy yet: Dracula.

It’s almost cruel to compare Blade Trinity to the rest of the trilogy, but I wouldn’t have to if it did enough to stand on its own. Sadly, its failings are even more pronounced next to the success of its predecessors: Blade was among the pioneers of the now-ubiquitous comic book movie genre, while Blade II is memorable for its world-building and giving us a look into the vampire world.

See, a successful sequel works by upping the stakes: Blade II accomplished this with their zombie vampires that threatened to wipe out vampires and humans alike. To top that, Blade Trinity introduces us to Dracula, father of the vampire species. Not a bad idea, but the problem is, Dominic Purcell is badly miscast in what should be an iconic role, roaming the city streets shirtless and calling himself Drake.

I’d be hard-pressed to sum up what Blade Trinity is really about when there’s too many plot threads messily hamstrung together: The vampires frame Blade for murder to incarcerate him, until he’s saved by the Nightstalkers. But they resurrect Drake in hopes that he can defeat Blade once and for all. But they also intend to study Drake to turn all vampires into daywalkers. This, on top of the blood farms they’ve built to harvest humans of blood en masse. Which one of these schemes is Plan A, exactly? We have our Big Bad in Drake, but he’s not central in driving the plot forward, apart from bulldozing through the city battling our vampire hybrid hero.

Its problematic production is more fascinating than the plot itself: Tales abound of Snipe’s bizarre behavior on set–and it shows onscreen. This time around, he plays it off with what looks like boredom thinly disguised as stoicism. Blade Trinity features a talented cast, Wesley Snipes notwithstanding, that are largely wasted on awful dialogue. It’s down to the Nightstalkers, a group of plucky vampire hunter sidekicks, to fill in the cracks of Snipe’s phoned-in performance. Jessica Biel is bland as Whistler’s daughter, Ryan Reynolds was flown in to essentially play himself, while Natasha Lyonne and Patton Oswalt are relegated to little more than cameo appearances. They’re a pale imitation of the Bloodpack of Blade 2. They even brought Whistler back, but even Kris Kristofferson can’t save this movie–and when they kill him off yet again, it’s less of a loss and more a lazy retread.

What sets Blade Trinity apart from the first two films is that it seems to have been written and edited for fleeting attention spans of restless teenagers: Abigail blasts rock music on her headphones as she faces off against vampires. Edgy! A vampire, braving the daylight in full protective gear, flips off the sun. Extreme! Ugh. We don’t have a script so much as a non-stop stream of snappy one-liners. We’ve swapped the snooty, wizened leaders of vampire society for a bickering cadre of well-suited neckbiters, led by Parker Posey as Danica Talos. She’s funny, but not menacing. None of them are. This is what vampire society under Deacon Frost and his thuggish friends would have looked like, but more obnoxious.

This is a trilogy that’s never shied away from graphic violence and special effects, and Blade Trinity follows in the same vein. It still has explosions and car chases and fight scenes in excess, if not the more CGI-laden sort. But that’s the bulk of it: Shiny, mile-a-minute action sequences, with few of the simmering moments that delve into Blade’s internal struggle or let the importance of the plot sink in. 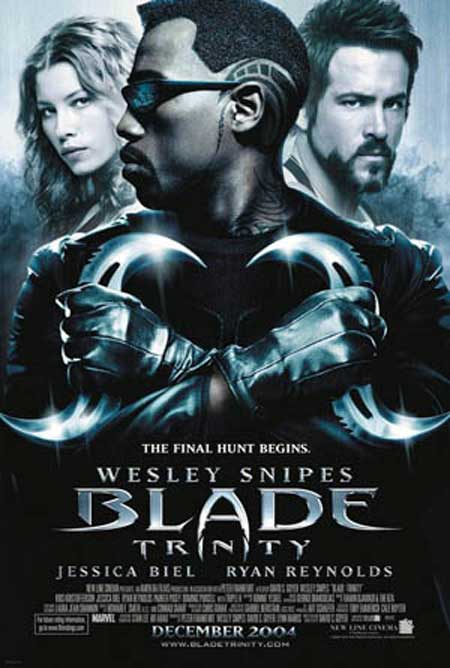 Ultimately, Blade Trinity is a trainwreck, but at least it’s an entertaining one. It’s ironic that David S. Goyer, who penned all three Blade movies, would essentially run the very franchise he helped build into the ground. Clearly he doesn’t have the chops to sit on the director’s chair, and maybe because he’s pulling triple duty as producer and writer, his script’s lazier in this too: Until the Blade TV series, Goyer essentially cut off any chance of a comeback when he wrote in the Daystar virus, which the Nightstalkers hope will wipe out all of vampirekind. If you think that’s bad, it’s followed by a Deus Ex Machina of the worst kind when Drake bestows Blade a parting gift at the film’s end. You want to kill off two hours, that’s what Blade Trinity is for. But it’s an anemic final installment to what was a gritty vampire saga.