“A rare mutation has occurred within the vampire community. The Reaper. A vampire so consumed with an insatiable bloodlust that they prey on vampires as well as humans, transforming victims who are unlucky enough to survive into Reapers themselves. Now their quickly expanding population threatens the existence of vampires, and soon there won’t be enough humans in the world to satisfy their bloodlust. Blade, Whistler (yes, he’s back) and an armory expert named Scud are curiously summoned by the Shadow Council. The council reluctantly admits that they are in a dire situation and they require Blade’s assistance. Blade then tenuously enters into an alliance with The Bloodpack, an elite team of vampires trained in all modes of combat to defeat the Reaper threat. Blade’s team and the Bloodpack are the only line of defense which can prevent the Reaper population from wiping out the vampire and human populations.” (courtesy IMDB)

After recovering from a rather silly prologue recapping the events of the first film, Blade II (2002) opens with Wesley Snipes storming the streets of Prague looking for his former sidekick and mentor, Whistler (Kris Kristofferson), who has been frozen in a man-sized lava-lamp, not unlike Han Solo in Star Wars VI: Return Of The Jedi (1983). Rescuing his bearded companion, Blade defrosts Whistler before forcing him to go cold turkey, given that he now possesses the bloodlust acquired from a vampire bite – this raises possibilities for a potentially interesting subplot which is never really explored by the filmmakers.

With a new I.T. hotshot technical advisor named Scud (Norman Reedus) joining Blade’s crew, they find themselves entertaining a few unexpected guests from the Vampire Council late one night, when the intruders bring news of a new type of bloodsucker that threatens the existence of every known species on earth as we know it. Reapers, the newest bad boys on the vampire block, are a seemingly indestructible genetic mutant with trapdoor mouths that peel open much like the Predator (1987) in the film of the same name. Worse still, they’re the crack addicts of the breed – neuvo-metal fashion victims with physiognomic trademarks akin to Max Schreck in Nosferatu (1922). When Blade reluctantly agrees to team-up with the Bloodpack – an undead commando group led by the beautiful Nyssa (Leonor Varda) – to hunt down their common enemy, one thing becomes frightfully certain: there’s a fistful of frenetic action about to take place.

Insofar as the plot to Blade II is strictly ancillary to the set pieces, the movie may suffer from its fair share of ‘fast-forward’ moments – you know, when you fast-forward through the friendly dialogue that separates the money-shots – but director Guillermo Del Toro thankfully throws everything but the kitchen sink at the viewer in this dazzling showcase for digital technology. Boasting some of the best martial arts sequences since Once Upon A Time In China (1991) and a good old-fashioned stomach-churning autopsy, the marvelously maintained nocturnal atmosphere also combines a gothic mood with cyber fashions, realised best of all by the kind of orgiastic rave party Busby Berkeley might have choreographed for the undead. 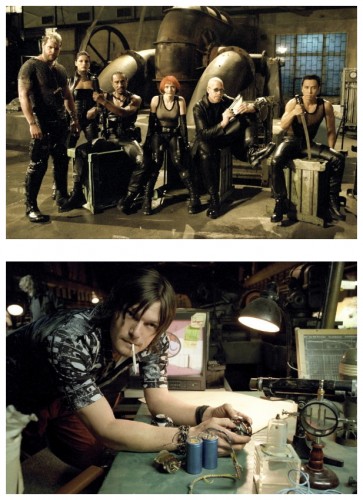 Special effects-wise, Del Toro embraces the technology of The Matrix (1999) and the interactive immediacy of first-person shoot-em-ups, favouring speedy interchanges and gruesome denouements, UV lighting and rapid-fire cutting. And like the film, performances live and die in the editing room, with there being as many casualties as there are survivors. Some of the best humour of the movie includes Ron Perlman‘s character being afflicted by a small bomb which is planted in the back of his skull, with Snipes gleefully assuming the role of his tormentor. Elsewhere, there are hard lessons to be learned, with the horrific-looking suture of scars marking Scud’s chest exemplifying the most serious masculine moral imbedded in the story: always think twice before getting into a tent with two strange lesbians.

The Freudian resolution involving the lead Reaper’s attempt to usurp his father sits uneasily within the comic book context of the piece, while a pending romance between Blade and Nyssa seems to have been sacrificed at the convenience of a shorter running time. Luckily, Blade’s self-loathing remains intact, he’s a vampire in denial and adds a much needed dimension to this tortured hero, as well as a very recognisable trait for the movie’s teen/goth demographics. Injecting a specially prescribed serum to override the impulses of his thirst for blood, Blade is often depicted as a shameful heroin addict hiding alone in a room. And while this interesting analogy eventually gets lost in Del Toro’s shorthand storytelling approach, it does touch on the torment inherent in the repression of evil desires and therefore, by tenuous implication, goes someway towards explaining why J-Lo ever hooked up with Ben Affleck.

But that’s another story for another time, a story we can only hope finishes with a spectacular eye-popping duel as exciting as the mano-e-mano dust-up deliriously delivered during the final moments of Blade II. As an action finale this sequence just might be the most rousing climax of 2002. Imbued by the actors with enough Roddy Piper-inspired kabuki fight manoeuvres to assuage the most ardent fans of John Carpenter‘s They Live (1988), the biggest surprise of all comes not from the brutal finish, but by the cauterising melancholy of the final shot which is both a fitting conclusion to the comic book nature of the story, and a timely reminder of the other type of movie Del Toro is also capable of making.

I was lucky enough to view a two-DVD set containing some intriguing special features, including a rather candid audio commentary by Del Toro and producer Peter Frankfurt which is both boisterous and informative. Whether comparing blood splatter to a Jackson Pollock painting or applying Gene Kelly dance moves to a sword-fight, both men seem to have a firm grasp on slinging the action through boldly absurd tangents or, as Del Toro sums it up: “If logic is your forte, go see A.I. (2001) but, if you want to see an entertaining movie, welcome to this one.” There’s also an 83-minute documentary entitled The Blood Pact which explores all the usual behind-the-scenes facets: Del Toro set out to make an absolute comic book movie, drawing from eclectic sources ranging from anime to The Dirty Dozen (1967). A major hand in the design of the Reapers, Del Toro adhered to a ‘National Geographic’ approach referencing exclusively from real animals.

There’s also twenty-four minutes of deleted/alternative scenes with equally boisterous and instructional optional commentary. Despite Del Toro’s insistence that “What you will see is mostly crap,” the edited sequences actually contribute to an interesting subtext and character depth, like alluding to the fact that Whistler could be a vampire, a flashback to Whistler and Blade’s first meeting, a glimpse into the origins of vampire overlord Eli Damaskinos, Blade and Nyssa post-coital, plus an extended search sequence in the House Of Pain that pays tribute to David Cronenberg‘s adaptation of Naked Lunch (1991). And it’s on that note that I’ll ask you to please join me next time when I have the opportunity to present you with more unthinkable realities and unbelievable factoids of the darkest days of cinema, exposing the most daring shriek-and-shudder shock sensations to ever be found in the steaming cesspit known as…Horror News! Toodles!