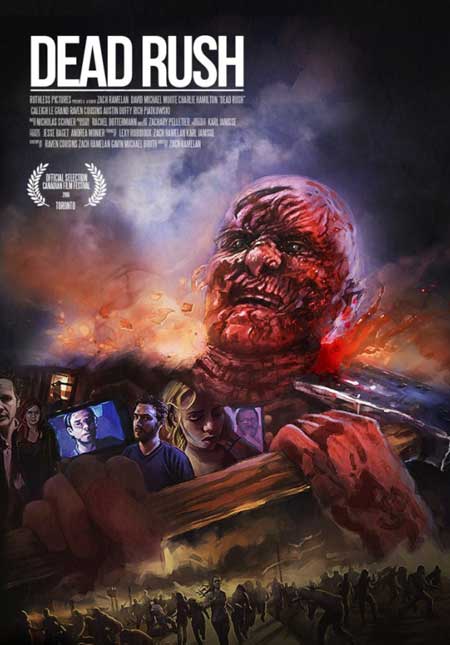 The zombie apocalypse is in full swing as told through the point of view of David. Will he be able to muster the strength and courage to overcome all of the insatiable flesh eating zombies or will he succumb to the seemingly inevitable Dead Rush?

Dead Rush aka Hard Line premiered as part of the Canadian Film Fest this past March in Toronto. This slice of Canadiana was shot in the town of Kitchener, Ontario. One does not have to be a genre fan to appreciate the rustic feel of this picture. The overall product has the appearance as though it could’ve been shot anywhere. The setting is void of consequence as the concentration appears to be more on the fact the entire world has come completely undone as a result of an unrelenting virus turning most every day, ordinary people into flesh eating zombies. The zombies as characters seem to be more of an afterthought as the sentiments and myriad of emotions are more of the focal point rather the reanimated.

The overall theme of a sense of loss is illustrated effectively. As told for the most part in first person point of view through the eyes of David (David Michael Moote) we feel his sense of love for Meg as played by the stunningly gorgeous Raven Cousens. Tenderness is illustrated on all fronts. Their admiration and affection runs deep and is without question. We as the audience live vicariously through their endearment and wish to venture on to see what becomes of the inseparable couple.

Chaos, carnage and mayhem is depicted effectively by director Zachery Ramelan. Utilizing simple yet effective angles, techniques and shots, we embody the Dead Rush experience whole heartedly. We feel the state of desperation with each passing scene and wonder as the body count continues to rise if there will be any survivors to speak of by the final credits. 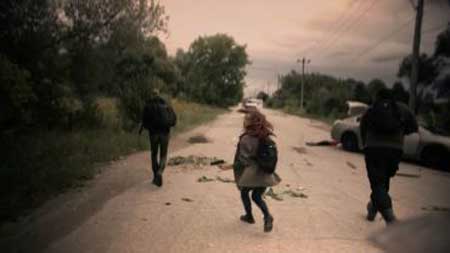 While undeniably there is a strong market for found footage films Dead Rush brings something much more to the table than your typical first person persona flick. The formula of found footage breathes a certain sense of authenticity to the audience. Void of all the amateur nausea inducing screen shots of the shaky, amateur cinematography, we feel each the wide array of emotions not only from David but those closest to him and the ones he loves.

Comedic dialogue provides necessary levity and a most welcome interlude from the gruesome scenes highlighted otherwise. In some instances we see ourselves in the characters of David and Wayne and transcend our own interactions through each. We can’t exactly classify Dead Rush as a comedy/horror mish-mash but some of the sarcastic wit lightens the mood and puts the viewership into a roller coaster ride of emotion. 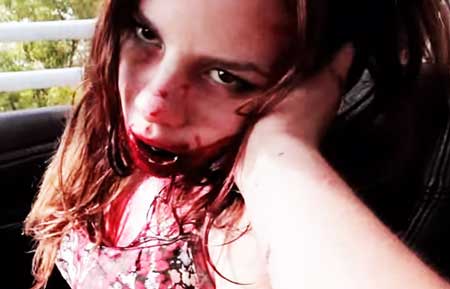 A solid soundtrack, musical montage and sound effects illustrates a most trippy environment. Each of the senses are captured effectively as the editing process conveys a world unhinged in double vision personified.

David’s undying love and hope to be reunited with Meg moves the plot along at a reasonable pace. Even the most cynical of audiences will have difficulty refraining from being invested into the story movement. His tenacious faith in pulling what matters to him most will keep viewers fixated until the final sequence. 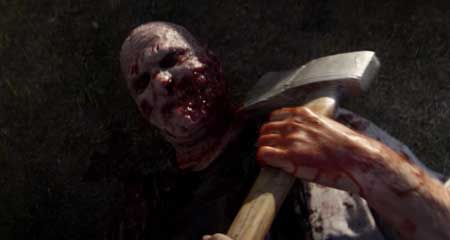 A certain secondary character’s demise is a pivotal plot point. Suddenly all bets are off and we begin to question what possible fate lies around the corner for the seemingly doomed David. The level of intrigue is heightened and it’s anybody’s guess how Dead Rush may conclude. Not exactly your thinking man’s psychological thriller but this piece tends to command a level of respect for originality and innovation.

An underlining theme of dissention and mutiny within a new, underground colony provides allure to audiences looking for something innovative and unpredictable. As a result we endorse what any number of possible outcomes may arise, making Dead Rush a bankable picture in anyone’s eyes.

Special nods should go to the special effects and make up department. Simplicity seems to rule supreme meaning in many cases less is more. An over indulgence of gore is alleviated, somehow suspending the plausibility of this soiree.

Perhaps most notable is the dizzying aerial shots towards the final act. A blinding light flash before David’s eyes accompanied by a harrowing sound track provides open interpretation to the viewer allowing us to draw our own conclusions making this a certifiable conversational piece long after the final credits.

-Three and half tombstones out of five