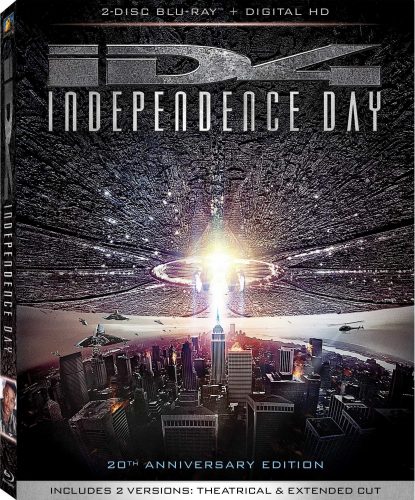 “On July 2nd, communications systems worldwide are sent into chaos by a strange atmospheric interference. It is soon learned by the military that a number of enormous objects are on a collision course with Earth. At first thought to be meteors, they are later revealed to be gigantic spacecraft, piloted by a mysterious alien species. After attempts to communicate with the aliens go nowhere, David Levinson, an ex-scientist turned cable technician, discovers that the aliens are going to attack major points around the globe in less than a day. On July 3rd, the aliens all but obliterate New York, Los Angeles and Washington, as well as Paris, London, Houston and Moscow. The survivors set out in convoys towards Area 51, a strange government testing ground where it is rumored the military has a captured alien spacecraft of their own. The survivors devise a plan to fight back against the enslaving aliens, and July 4th becomes the day humanity will fight for its freedom. July 4th is their Independence Day…” (courtesy IMDB)

Back in the late seventies, a young West German named Roland Emmerich attended the Munich University of Film and Television with the intention of becoming a production designer. He changed his mind when he saw Star Wars IV A New Hope (1977) and decided to become a director instead. For his final thesis, he wrote and directed his first full-length feature The Noah’s Ark Principle (1984), receiving much acclaim at both the Berlin International Film Festival and the Sydney Visions Film Festival. He then went on to direct his own projects such as Joey (re-released as Making Contact 1985), Hollywood Monster (re-released as Ghost Chase 1987) and Moon 44 (1990). Despite the fact that his films were only ever seen on the big screen in Europe, Emmerich insisted on filming them in English to appeal to a larger market. 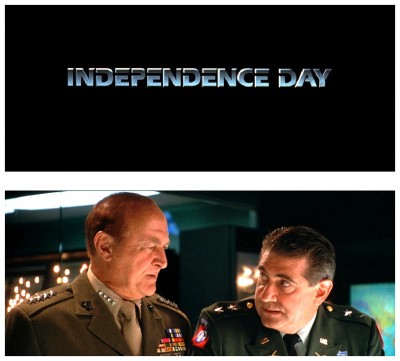 Meanwhile, in Hollywood, actor Dean Devlin appeared in a number of television shows and films during the eighties, including My Bodyguard (1980), The Wild Life (1984), Real Genius (1985), and Martians Go Home (1989) coincidentally starring Randy Quaid. In his spare time Devlin wrote scripts, and his first produced screenplay was a box-office hit entitled Universal Soldier (1992). Despite achieving prominence as a screenwriter, Devlin continued to take acting roles, one of which was Moon 44 (1990) directed by Roland Emmerich. These two sci-fi ‘fanboys’ became great friends, and together wrote and produced Stargate (1994), a commercial blockbuster that spawned one of the most popular television franchises of the last two decades. 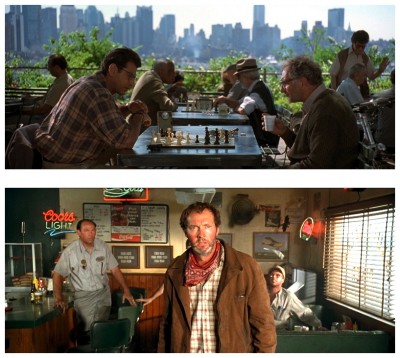 While the pair were in Europe promoting the release of Stargate, a reporter asked them about their belief in extraterrestrials. Emmerich responded by asking the reporter to imagine waking up one morning to find fifteen-mile-wide spaceships hovering over every major city in the world. Emmerich then turned to Devlin and said “I think I have an idea for our next film.” The two wrote the script for Independence Day (1996) during a four-week vacation in Mexico and immediately sent it out for consideration. 20th Century Fox optioned the film and right away wanted to change the title to Doomsday and release it on Memorial Day (May 25th) in order to avoid the traditionally fierce box-office competition on July 4th. 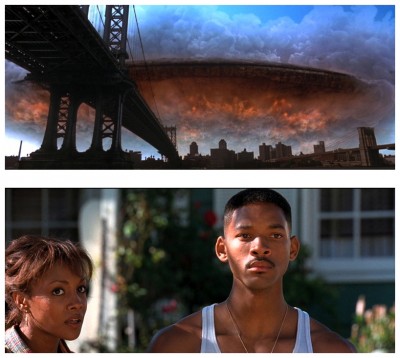 The title change, of course, did not happen and the subsequent movie was heavily criticised for its overly American patriotic rabble-rousing finale but, as far as big-budget Hollywood popcorn movies go, Independence Day is an ideal template for how to make a blockbuster, and closer textual analysis reveals some textbook ideas more Hollywood screenwriters should really pay attention to. A record number of special effects shots were required, with a great dependence on miniatures rather than computer-generated imagery in an effort to save money and to achieve more authentic-looking fire effects. Twice as many miniatures than had ever been built for any film before: buildings, vehicles, city streets, aircraft, landmarks and monuments. 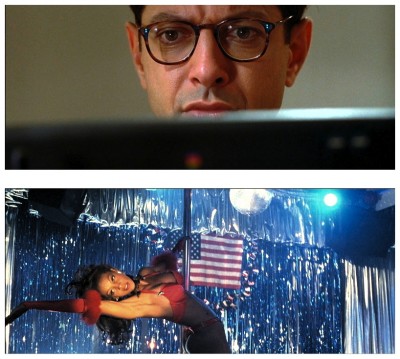 The film takes place over three days, beginning two days before the annual July 4th celebrations. Gigantic alien flying saucers appear above each major city around the world, giving undeniable proof that there is indeed intelligent life beyond Earth. But whether or not they are peaceful is unknown until, in a coordinated attack, each craft unleashes a deadly heat ray destroying everything in its path, and the world’s military can do nothing to stop the mass carnage. As a ragtag group of survivors make their way to Area 51 in the Nevada desert, two heroes – air force captain Steve Hillier (Will Smith) and journalist David Levinson (Jeff Goldblum) – find a gap in the alien’s technology and the pair fly one of the alien ships back to the mothership in orbit around the Earth and save humanity. Hooray for our side! 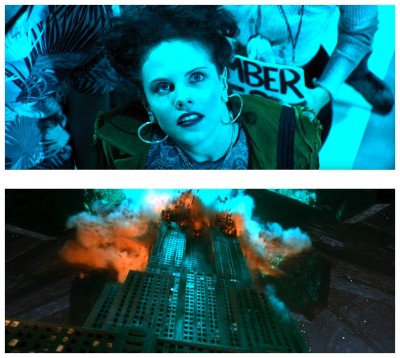 Although Independence Day is clearly inspired by The War Of The Worlds by my old drinking buddy H.G. Wells – replacing the common cold that defeats the aliens with a computer virus – the film is also an homage to the history of science fiction cinema, with many references to The Day The Earth Stood Still (1951), Alien (1979), Star Wars IV A New Hope (1977) and even 2001 A Space Odyssey (1968). Equally referenced is the history and mythology surrounding UFOs in contemporary folklore: Area 51; Roswell; alien autopsies; alien abductions; etc. The film could almost be said to work purely as a compendium of science fiction cinema. 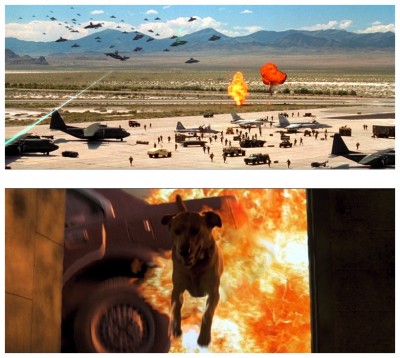 Emmerich assigned the design of the aliens to master monster-maker Patrick Tatopoulos, insisting that they appear both familiar yet completely original. Tatopoulos presented the director with two very different designs, a traditional-looking diminutive ‘grey’ alien with a large head, and a two-and-a-half metre tall bio-mechanical suit equipped with twenty-five writhing tentacles. Most importantly, Emmerich and Devlin structure the story so that it has a kind of Disaster Movie logic to it. Reminiscent of the disaster films of the seventies, Independence Day has multiple character plot-lines that ultimately come together. Although Hillier and Levinson ultimately emerge as the film’s heroes, named characters die, often surprisingly, leaving the audience wondering who will survive and who won’t. 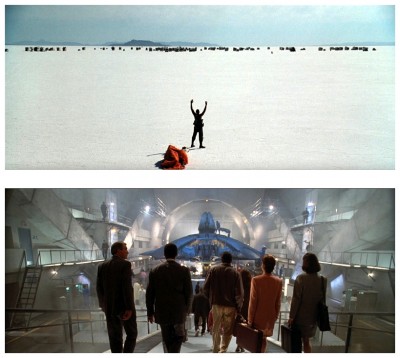 But for all the big-budget hoopla this blockbuster threw around plus the Oscar-winning special effects, Emmerich and Devlin never lost sight of the human stories amidst the mayhem. Independence Day is the ultimate B-movie with a strong focus on the humanity of the characters. The dynamic duo’s next project, Godzilla (1998), made almost US$400 million, despite receiving a severe drubbing from fans and critics alike. Thin plot, poor performances and uneven direction, while fans targeted the film’s drastic reinterpretation of the monster and its radical redesign. Their last collaboration was on the The Patriot (2000) starring Mel Gibson, after which Devlin went on to produce films such as Cellular (2004), Who Killed The Electric Car? (2006) and Flyboys (2006). 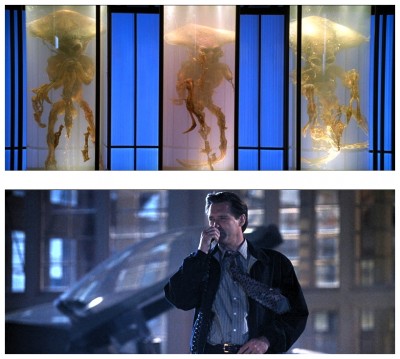 As early as 2009 Roland Emmerich and Dean Devlin announced that they had completed a screenplay for a sequel to Independence Day, but refuse to make it until Will Smith agrees to return as Captain Hillier and Devlin, as of this writing, is keeping himself busy by directing the science fiction action film Geostorm (2016) starring Gerard Butler, Matt Smith, Michael Caine and Tilda Swinton, but that’s another story for another time. Right now I’ll bid you pleasant dreams, and remember, as my old friend Bela Lugosi used to say, “Bevare! Bevare of the big, green dragon that sits on your doorstep – and the gifts it leaves on your lawn.” Toodles! 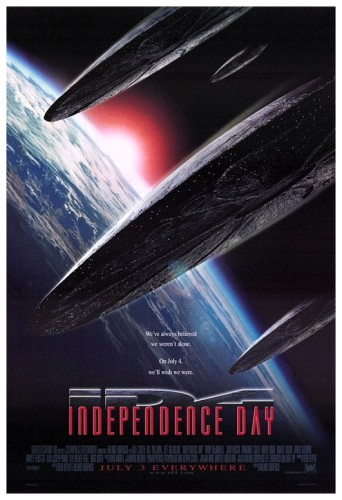