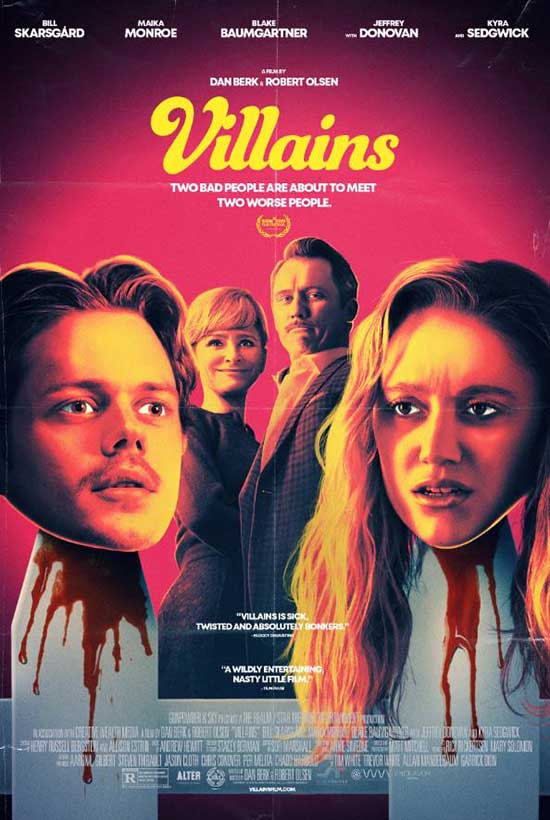 After a pair of amateur criminals break into a suburban home, they stumble upon a dark secret that two sadistic homeowners will do anything to keep from getting out.

Villains is an offbeat horror comedy that I surprisingly enjoyed. Normally I veer away from the horror/com genre. I like my movies to scare me and give me the creeps, comedy usually doesn’t mix. In this case I wasn’t scared in the traditional sense but some of the comedy in the plot was so dark and close to home it did scare me emotionally. Villains is a different kind of horror. Furthermore, the wild ride is downright bonkers fun.

Maika Monroe steals the show in her portrayal of the girlfriend “Jules.” As the female half of a veritable “Bonnie and Clyde,” she is overly affectionate and full of enthusiasm for the crimes she commits. As with most movies like this, the premise is that crime doesn’t pay. Still, we characteristically have a couple trying to make it pay as Karma smacks the down. Bill Skaarsgard is the boyfriend. Of course, I had to wait for the surrealistic clown of “It” fame to leave my mind (it took a while). But Skaarsgard is the rock in his relationship and is a great match for Monroe. He is almost unassuming when he corrects his overly emotional wife. One example is when they are tied up and he tries to get her to stop grinding her teeth. “You’ll erode your enamel.” This juxtaposition is absurdly funny because they are likely about to be killed. They play the part of a crime driven couple very well.

Some of the situations really reminded me that communication is so important in a relationship. Perhaps if this couple communicated better they would not have ended up getting caught robbing a house. But everything happens for a reason right? I myself might argue that but in this case I think it’s just a random set of processes.

Still, we have a case where the crime is snuffed out by even worse criminals: the homeowners, played by Kyra Sedgewick and Jeffrey Donovan. Kyra Sedgewick was born to play this role. She fills the screen with a lovely yet surely psychotic, puritannical zeal. Donovan is just ok. I liked him better in the film “The Changeling.” But despite his average performance, this couple still commands the screen. It might have been interesting to get more prior knowledge about the couple. I personally would like to know the answer to the question, why is Maika Monroe so smoking hot? But I digress. 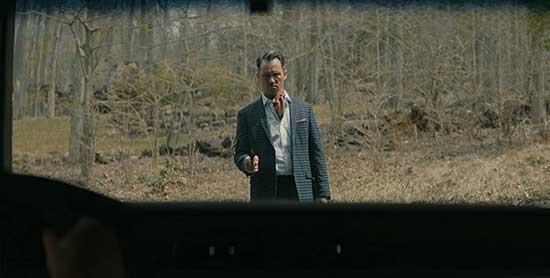 So, with the horror embedded in the plot, this is not a horror film every fan will embrace. I personally liked it because it handsomely covered dysfunction in a relationship. As it brought the horror in those confines, I got goosebumps when it hit close to home. After all, don’t we all have some dysfunction laying around? The final scene has received much criticism: some good, some really not so good. I think it works because it wraps up the overall theme that measures levels of evil onscreen. Which couple was worse? Even though good may come at the end (no spoilers on that) the question for the viewer remains: was it the “Bonnie and Clyde” or “The Munsters.” Since in my analogy the Munsters abduct a child, it is easy to think them the more evil. In this case however, you might blame youth and ignorance for a lot of trouble. Could humans actually be more evil when young and “innocent?”

The film is not without flaws. It looks like most reviews are giving around a 5/10. Because it resonated with me on the relationships issue and because it had cold black humor, I rated it higher. Based on the sarcastic black humor and chilling horror plot, I would recommend this film. As far as I am concerned, I loved the experience. I give it a 7/10.