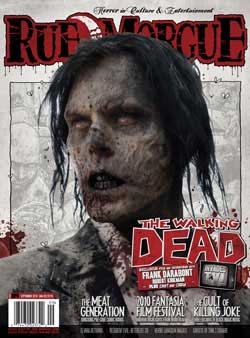 Now if that “walking dead” zombie isn’t a shocking piece of cover art to behold, I don’t know what is. And if you’ve been living in a box, welcome to the age of zombie films galore prompting a brand new television series that we hope is as good as it looks. That being “the Walking Dead” which this issue is focused on. TV may change for the better if a zombie series can stand the test of time and ratings. Details about the show are discussed and how the team is able to take the comic book content and ramp it up into a lasting number of episodes. Kirkman also gets a feature on his comics that inspired the whole dang kabob of dead corpses and syndication. Quite an interesting story that should get you all geared up for some serious TV time.

In news, Elvira is gearing up for another round of cheesy horror movie hosting that I’m sure will be to the delight of horror fans boys everywhere. Sure we’ve seen her in a few other things over the years, but something about gearing up in that Elvira look…..well it just hits all the marks. Elviras Movie Macabre will be coming soon in Sept. If you caught the striking Karloff ad, you know that his long lost horror series “Thriller” is now available in DVD form….14 DVDs at that…man what a collection.

EC comics, remember them? Well back in the day, they sure stirred up a mess of controversy that had parents shouting obscene and nasty digging them a fresh grave to fall into. This extreme horror comic is still as influential as ever as Rue morgue takes a look at EC comics and where you can still catch some of there original gory masterpieces.

Jumping forward, I’m always a sucker for film conventions and new film listings. It looks like Fantasia 2010 is chock full of films that have been on my “to see” list….though I’m not sure I’ll make it to Montreal this year. Too bad as I really want to see “Mutant Girls Squad” and “Alien VS Ninja”. In any case, maybe a few of these will make it to next years 8 films to die for???

Killing Jokes, gets a nice 2 page feature, but to be honest I don’t mix my horror an music that often. Smaller features discuss the recent “Suck”, a mighty rock and roll masterpiece in my book and the upcoming Resident Evil 3D. Though with it appearing next weekend, I’m holding of on any reading till afterwards. Joan Crawford gets a small piece that covers some of her early horror film appearances, but from what I’ve heard she’d rather that era be buried than attributed to. Regardless, Joan is a prime candidate for horror on screen.

Fans of Extreme Horror, will dif the little article by Gore Met. It appears a new nasty treasure is gearing up by the name of “And Then I Helped“. nope, no release date or news on the film….but from the sound of it, it should contribute nicely to the underground market of too hardcore for eyes collection. Keep me coming Gore met, so we can dig them out of the cinematic cesspools.