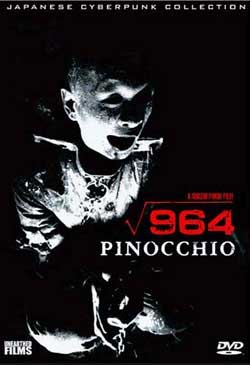 Pinocchio 964, lobotomized cyborg sex slave, is thrown out onto the street by his owners because of his inability to maintain an erection. He is befriended by a criminally insane, memory-wiped, homeless girl. Meanwhile, the corporate entity who manufactured and sold him plots to kill him because of his malfunction.

Pinocchio 964 is the nightmare of a cybernetic sex android let loose into the world without a memory. Wandering around Japan, Pinocchio finds Kyoko, another amnesiac with a horrible secret to her own memory loss. Together they try to piece their lives and live in a world where memory is no longer needed. At the same time, Pinocchio’s fiendish architect and master is desperately trying to find his lost prototype before the world finds him. As agents hunt down Pinocchio, the sex android begins to unravel in what can only be said is a hallucinogenic thrill ride that has to be seen to be believed. Shozin Fukui’s masterful direction gives the viewer a totally unique experience along the lines of, Tetsuo the Iron Man. This underground classic packed the theaters in Japan and stood out among so many other films that it was hailed as a masterpiece of innovation in Japan’s film industry.

From the depths of cyber punk lunacy comes another stylized feature of vivid imagery and connect the dots. Though unlike others I’ve seen under the cyber punk label, this one is in full color. Usually they have been B&W to exploit the contrast and induce a cold feeling though out the film. I’ve found it always helps to read the back of the DVD, so you go into these films with some kid of base. Otherwise its usually 30-40 minutes of putting together the pieces (if any). 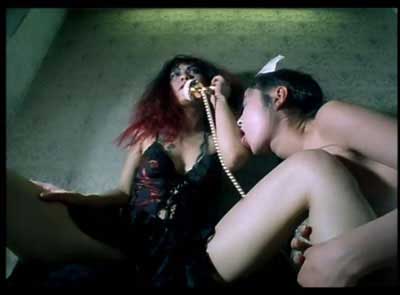 Pinocchio is a cyber sex android, created for wealthy horny old women who want constant sex to keep them fulfilled. Apparently you can order them from a catalog, but under extremely discreet conditions. Our boy Pinocchio (his model #964) is thrown out into the world for not being able to live up to his duties. Stumbling around like a mute animal he is taken in by a another street person amnesiac named Kyoto. Somehow a relationship builds, though it’s more like a master leading a puppy around. All the while we have various flashes of abstract imagery cutting in and out of the segments. In fact the android comes across more like a mindless moron than an actor.

Typical of these cyber punk films we have a few impact segments where Pinocchio starts vomiting yellow paint and gurgling up his innards. Why? I’m not really sure, some kind of malfunction maybe?? It looked cool so I guessed it was necessary right? After a bit of the yellow paint shuffle, his street roommate Kyoto starts freaking out as well. We go though some pretty lengthy strolls though the train station as Kyoto walks around aimlessly, gyrating, twitching and regurgitating her own vomit to proceed to re-in jest it afterwards. Though as sick as that sounds it looks more like grits and yellow oatmeal than anything. Acting performance?….ya the bitch is insane. 964 Pinocchio like other films of this kind, base there impact more on visual freak outs than real cohesive story lines. Sometime the edits go off on tangents throwing in shots of bizarre cuts and inset randomancy. 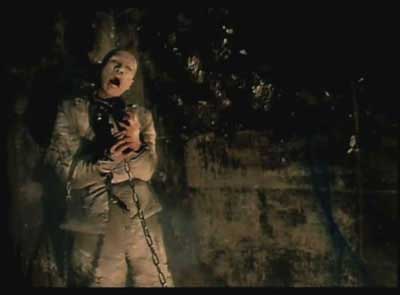 In the meantime, the corporation that created him has its agents out looking for the android to exterminate in fear of discovery. It’s pretty apparent that everyone in this films is insane. Usually over the top screaming, combined with zoom in camera shots and weird sh*t in between that doesn’t really make much sense. The corporation wants there android back so they can erase him and re-use him once reprogrammed. There attempts to bring him in are pretty weak and is confused with the visual lunacy of the moments. Pinocchio does finally find his own way back after dragging a cinder block chained to him for over 10 minutes through the city and through the streets. As expected. violence, more weirdness and a potato head follows.. Don’t get it yet? that’s ok, read on for some comfort analogy. 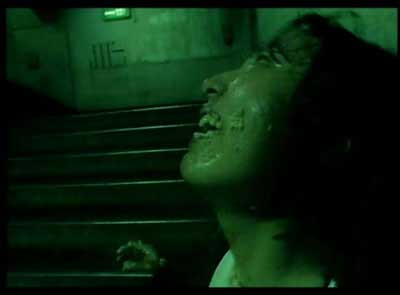 It was actually watching few of these style movies that I started to get the gist of what they entailed. For newcomers, 964 P is not meant to be watched like your average plot filled film. There is a base of a story but its very small in comparison to the visual style intended for viewers. In fact I’ll say right off the top the visual style is quite amazing. It has to be seen to really know what I’m speaking of however it combines, running cameras, sped footage, stop motion live action, camera mounted below, to sides, behind and running past. That’s just get started…. The angles and time spent editing this bizarre freak fest together is impressive. 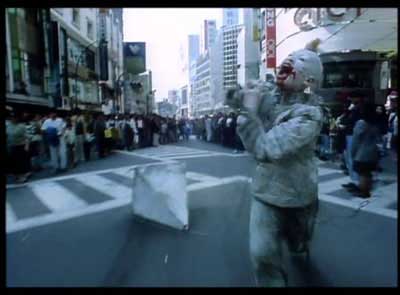 The filming took 6 months to shoot and another 6 to edit. There is much that really doesn’t make alot of sense. That is all intended to show off a unique visual approach…keep that in mind. I think most folks will shake there heads and lose there minds watching this. Us other folks will see it for what it is and enjoy the art housy uniqueness it brings. For review sake, its hard to call it a good film. It better to call it a unique film and something different ….Final words on this is something I feel strongly about. Filmmakers should study this just for the sake of introducing some new techniques into tired productions.

Available from your fine folks at TLA Releasing