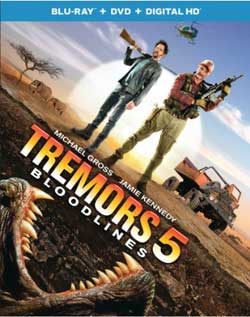 The giant, man-eating Graboids are back and even deadlier than before, terrorizing the inhabitants of a South African wildlife reserve as they attack from below-and above.

Here comes a seriously biased review, folks. Come on…it’s a Tremors film. Can it really not be awesome? I love this series. Even the less-than-awesome tv show was totally worth watching.

Our favorite survivalist nutbar is back in this one. Burt Gummer (Michael Gross) is still doing his thing in the desert of Perfection, Nevada. He’s been making his rent with a television show (probably public access or podcast, not sure) teaching basic survival skills to his viewers. The first five minutes or so of the film gives us the opening of an episode where Burt is showing us how to cook rattlesnake in a sand kiln. How the mighty have fallen. 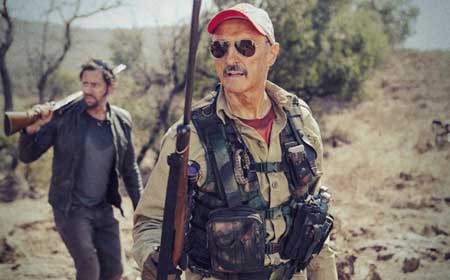 Then along comes a dirt biker who crashes into the filming. Burt doesn’t dig that at all. Turns out this guy is named Travis (Jamie Kennedy) and he’s the new cameraman for the show. Travis is a former war correspondant with a lot of experience behind the lens, and also a big fan of The Gums (as he calls him). Yea…Burt doesn’t like him.

Yet another intrusion comes when a man named Erich Van Wyck (Daniel Janks) appears and asks for Burt’s help. Erich claims to be with the South African Wildlife Ministry. Seems they have a graboid problem in the Cradle of Civilization and only Burt can solve it. So Burt and Travis pack up for Africa.

But things aren’t as easy as all that. African customs siezes all of Burt’s standard weaponry and he has to make due with poacher’s leftovers. This is definately Burt’s idea of “roughing it” as nothing they give him is anywhere near the firepower he had brought with him. 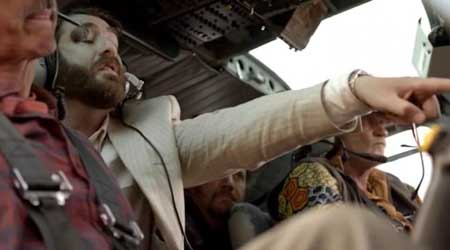 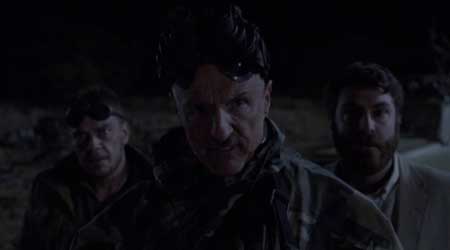 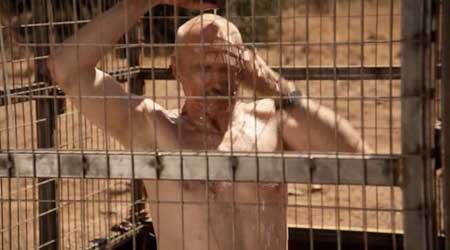 Also, the African problem is far worse than the usual worms. These are a new variety of graboid, attracted by heat signature as opposed to vibration. There are a lot of other distinct differences as well which make this flavor of graboid much more difficult to handle.

Local tribesmen refer to this new variety as “lightning birds”. They are considered sacred and worthy of respect. Doesn’t mean they aren’t afraid of them, of course. There is a beautifully shot sequence of the locals performing a warrior’s ceremony to honor the creatures ahead of Burt’s hunt.

Lastly, the infestation is on a wildlife preserve. Burt is instructed that he cannot kill these graboids, but instead must help facilitate their capture alive.

And so it begins. All the joy and wonder one expects from a Tremors film – blood, explosions, monsters, explosions, witty banter, explosions….did I mention the explosions? 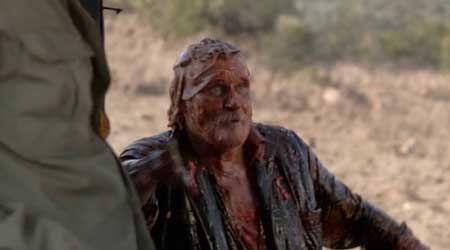 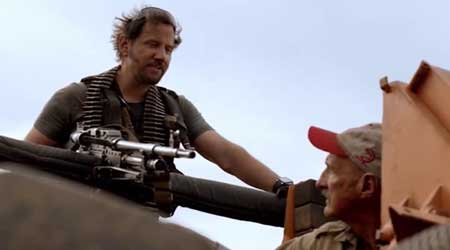 One cool thing the film does is bring everyone up to speed on the graboid problem without any sort of annoying flashbacks or clip footage. This is accomplished during the segment of The Survivalist, Burt’s television show. He gives a rundown on graboids, what they are, what they do, and how to destroy them accompanied by “artist renderings” of the monsters in question. So if you live under a rock and have never seen any of the Tremors series before now, you have all the information you need to keep up.

The writing is pretty much on point for a Tremors story. Four contributing writers for the screenplay, including John Whelpley who was a writer on Tremors 3. His experience with this franchise is obvious in Burt’s dialogue and action.

It’s a real treat to see Burt Gummer as an action hero rather than a nutcase. In previous installments of this series, Burt is portrayed as kind of nuts and not a little silly. Don’t get me wrong…he’s still Burt Gummer and everything that entails. But he’s not as ridiculous as we have seen him previously.

The comedic heavy lifting is handled by Jamie Kennedy as Travis with Burt as the straight man. I’m not a fan of Mr. Kennedy on the whole but he’s quite good in this film.

It is important to note the many side characters that populate the story. A personal favorite for me was bush pilot Den Bravers, played by Ian Roberts. All the crazy usually reserved for Burt is carried by this character and he is simply brilliant. A special mention also for Daniel Janks as the wildlife minister. 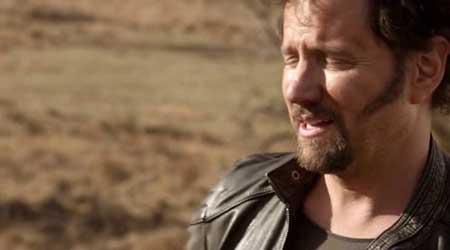 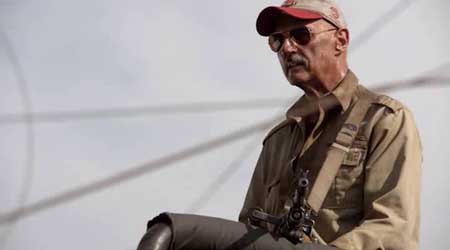 My only disappointment is the lack of a strong female lead. Doctor Nandi Montabu, played by the beautiful and talented Pearl Thusi, has many chances to be that strong female character but it never quite happens. However, like this series does, the female characters are the smart ones – the ones with the plan, the ones with the skills beyond guns and blowing things up. So there’s that.

Oh….and the Bloodlines reference in the title? There are several ways in which that makes sense in the film. No, I’m not gonna tell you.

And stay through the credits. Trust me…..

So on a scale of one to ten, ten being awesome, I’m giving this film 8 graboids.

Tremors 5: Bloodlines is now available on bluray per Universal Studios