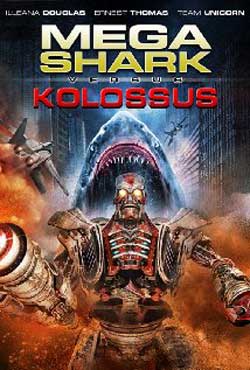 In search of a new energy source, Russia accidentally reawakens the Kolossus – a giant robot doomsday device from the Cold War. At the same time, a new Mega Shark appears, threatening global security

Mega Shark Vs. Kolossus is the fourth entry – FOURTH! – in the Mega Shark franchise. And the violent meglodon isn’t the only thing returning to the series. Director Christopher Ray is also on board after taking the helm on Mega Shark Vs. Crocosaurus.

This time around, the world is in danger from being eaten whole by a newborn meglodon. Dr Alison Gray (Illeana Douglas) wants to study the new shark in hopes of better understanding the species that’s plagued the last three films. However, Admiral Titus Jackson would rather see the creature strung up to dry. Like some sort of delicious shark jerky…

Meanwhile, in the Ukraine – which in way no looks like Southern California – a black market criminal/terrorist/baddy accidently awakens the Kolossus; a giant Russian doomsday weapon with an unquenchable hatred of America. When these two oversized hate machines get together, watch out society! This ain’t your mama’s shark movie! 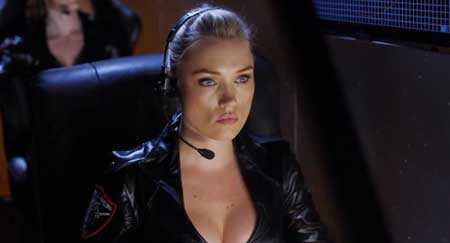 With their low budgets and high concepts, The Asylum’s Mega Shark films are almost bulletproof. They transcend the idea of criticism and opinion. Like Sharknado, their sister franchise, the Mega Shark films are paraded as guilty pleasures that we can all enjoy because everyone is in on the joke, right? Well, yes.

No, because if this latest entry is anything to go by, the Mega Shark is in danger of eating itself. In an attempt to make everything bigger and better, Mega Shark Vs. Kolossus is a derivative ensemble of tropes and ideas taken from other, much more qualified movies. There’s the robotic elephant in the room in that Kolossus is, for reasons only known to The Asylum themselves, a bootleg copy of an Attack on Titan monstrosity. Presumably to shift more units of their mockbusters to Japan. 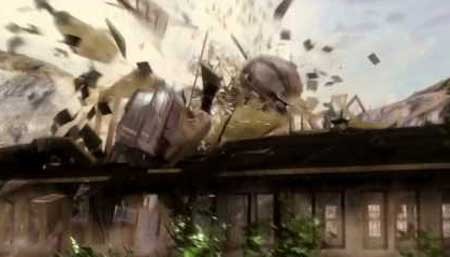 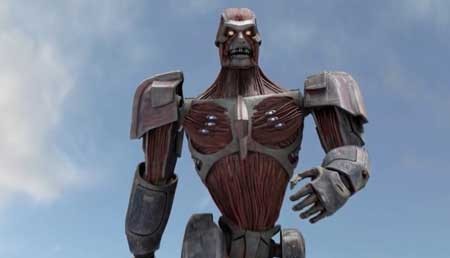 Then there’s the aforementioned Titus, played by Ernest Thomas channeling every Samuel L Jackson performance to date. If Thomas cried that he was tired of these mother*ckin’ meglodons in his mother*ckin’ sea, then I wouldn’t have been the least bit surprised.

In fact, you spend so much time trying to work out which movies Kolossus cribs from, you almost end up missing the fact that the two titular titans fail to meet up until the last ten minutes of the film. Yes, in what seems like a wasted opportunity – but also highlights the film’s low budget – the film takes its sweet time to get the two toe to toe. Or fin to toe. When they do finally meet up, it’s like watching your favorite screensavers go at it. I was reminded of an earlier time in my life when a friend’s birthday descended into all the guests gathering around his desktop to watch his Simpsons screensaver, whilst we shared one can of alcoholic lemonade. Bad times indeed, but substantially more fun than the truncated dust up that ends this rather middling movie. 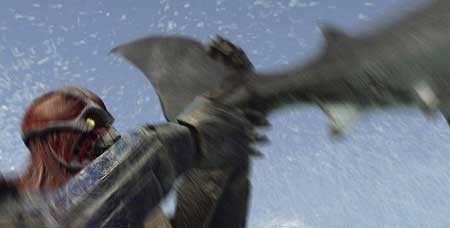 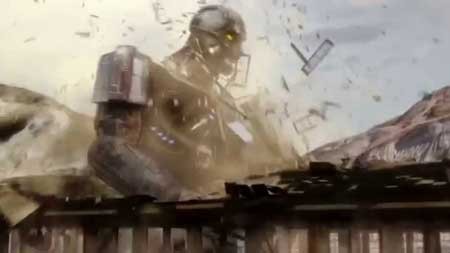 But to go back to a point I made earlier, Mega Shark Vs. Kolossus, for all it’s faults, will still make money. It’s so cheap to make, how can it not? As such, with green in their pockets, why wouldn’t The Asylum want to make another one? And no doubt I’ll be here this time next year – or next month depending how quickly they knock it out – grumbling that this isn’t a film, that there are better things to waste your time on, that all this were fields and you could leave the house without having to lock your door. Depending on your allegiance to the franchise, you will see this film and the one after that. You will read these words and give them very little thought. Which makes this whole exercise depressingly pointless.

So, well done Mega Shark Vs. Kolossus! With your cheap thrills and lackluster screenplay you’ve one upped me by laying bare my career and highlighting how useless it is in the grand scheme of things. I hope you’re happy with yourself. 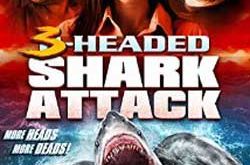