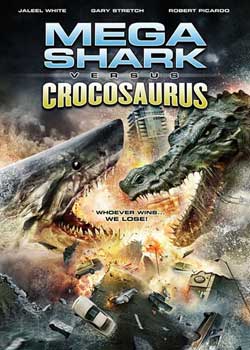 The massive prehistoric shark has survived the last battle, and the world is again threatened when a new, more dangerous foe is discovered in the jungles of Africa. Mega Shark Versus Crocosaurus is a monster disaster film by The Asylum, released on December 21, 2010 in the United States. The film is a sequel to the 2009 film Mega Shark Versus Giant Octopus, but contains none of the original cast from that film.

From the good folks at The Asylum comes the latest in the “when giant animals attack” genre, Mega Shark versus Crocosaurus. To truly enjoy this movie you just have to know what you’re getting yourself into before you watch it. If movies from The Asylum or those crazy Saturday night flicks on the Sci-Fi Channel aren’t your cup of tea, then stay very far away from this movie. If the above mentioned criteria give you a crazy tingling feeling, then by all means sit back and enjoy a fun, cheesy movie.

We start off in the Democratic Republic of the Congo, deep in a cave where some locals are digging for diamonds. One of them happens upon a very large tooth which the grumpy foreman promptly throws to the ground in disgust. It’s no big surprise to guess who’s getting chomped first. And it isn’t long before Crocosaurus makes his presence known, promptly making a quick lunch out of anyone foolish enough to be in his path.

Cut to the U.S.S. Gibson somewhere in the Atlantic Ocean. On board we meet Dr. Terry McCormick (Jaleel White of Urkel fame) who, with his hydrosonic spheres, is studying the effects of sound waves on sharks. Lucky for him there happens to be a megalodon, or the more enjoyable sounding Mega Shark, swimming right for the ship. After a couple of acrobatic leaps into the air and a thrashing of the tail, Mega Shark manages to sink the ship, leaving Dr. Terry McCormick to barely escape alive.

Back in the Congo we meet Nigel Putnam (Gary Stretch), Crocodile Dundee wannabe and adventurer. A woman approaches and offers him loads of cash if he can stop Crocosaurus from eating the workers in the mines. Those blood diamonds must be obtained at any cost, it seems, so Nigel agrees. He quickly discovers the main reason why Crocosaurus is on a rampage. Like any good mother, she is fiercely protecting her eggs and Nigel gets to see this first hand as Crocosaurus comes after him. He somehow manages to tranquilize the beast and in no short order loads her up on a ship and sets sail. If someone had only warned him about Mega Shark and its large appetite for crocodile eggs. You can almost hear the boxing announcer yell “Let’s get ready to rumble!” as all hell breaks loose.

Well, Nigel makes it to safety and no sooner than he reaches the nearest bar he is approached by yet another woman, this time Special Agent Hutchinson, Secret Service (Sarah Lieving of The Beast Of Bray Road). This time she wants him, along with Dr. Terry McCormick, to take down these two prehistoric monsters.

This movie has it all for the B-movie lover. Cheesy dialogue, cheesy special effects and plenty of crazed extras running about. My two favorite lines in the movie are “Then I suggest you bring your hydrosonic balls with you” and “They just took out Panama!” With a tag line of “Whoever wins…we lose!” you just know you’re in for an over the top crazy movie.

Seems all of the cast absolutely love their roles as each one plays their part to the dramatic hilt but Sarah Lieving really stands out. She plays Special Agent Hutchinson as always serious, no frills and just get to the point already attitude. Her direct and frank matter of speaking are just a hoot to watch. Special effects are what they are but fun all the same. When Mega Shark swims near the ship, its fin rises like fifty stories above the ship. So out of proportion but great to watch as the crew fires an endless amount of ammo into it with minimal damage.

There’s the old saying “you get what you pay for,” and it applies here. Please don’t think too much when watching this and you’ll have a blast. Sure, by the end of it you’ll probably be shaking your head at the craziness of it all but looking back on it will bring out a chuckle. Not a movie to watch repeatedly, but I think with a group of friends good for a rental. Ah, those crazy Saturday nights.