SYNOPSIS:
“Freeman Lowell looks after plants in giant space greenhouses. Back on earth, all the trees have long vanished, so Lowell puts a lot of heart into his work. When orders from earth are received to destroy the greenhouses, Lowell can’t go through with it, and cannot persuade his three colleagues to help him save the plants, so he makes other arrangements.” (courtesy IMDB)

REVIEW:
Films about outer space and space travel were thin on the ground in the early seventies, but one exception was Silent Running (1972) directed by Douglas Trumbull, the special effects genius who had made his reputation working on 2001: A Space Odyssey (1968) and The Andromeda Strain (1971), and later on Close Encounters Of The Third Kind (1977) and Blade Runner (1982). Made for a fraction of the cost of 2001: A Space Odyssey, its scenes of vast spaceships cruising silently through space compare well with similar ones in Kubrick’s film – Trumbull was assisted in the filming of the model effects by John Dykstra, who later created the effects in Star Wars IV: A New Hope (1977), Spider-Man (2002) and, yes, Caddyshack (1980) – there all similarities between Silent Running and 2001: A Space Odyssey end.

Silent Running is set in a giant spaceship called Valley Forge (many of the interiors in the film were shot in a decommissioned aircraft carrier of that name), which is part of a fleet of ships whose sole purpose is to fly about in space carrying all that remains of Earth’s plant life. No explanation is given as to what happened to bring about the defoliation of the planet, nor as to why the Earth hasn’t been re-seeded. We know the planet is still capable of supporting life because there’s plenty of evidence in the film to show that the human race is continuing to flourish. One of the characters mentions that there is no more unemployment, and you would certainly need an advanced technology to uproot whole forests and blast them into space. What is the human race doing for food now that all the vegetation is gone? We see the Valley Forge crewmen eating ‘artificial’ food, but that is hardly an explanation.

The authorities on Earth, apparently going insane from lack of food and fresh oxygen, decide they need the space fleet for commercial purposes and give the order to jettison the domes containing the greenery and then blow them up. It isn’t explained why they have to be blown up, or why the domes can’t be left in orbit around the sun – there’s no real reason for them to be attached to spaceships at all. The hero of the film, with the subtle name of Freeman, who is played by Bruce Dern looking and talking like a mad monk, turns out to be the last true conservationist left alive and refuses to obey the idiotic orders from Earth. His crew-mates, however, are quite happy to dump everything and get back to civilisation, so Freeman murders them all and heads the ship in the direction of deep space, his plan presumably being to hang around the fringes of the solar system until trees come back into fashion. He goes off, accompanied only by three cute little robots that look a little like walking television sets, which he dubs Huey, Dewey and Louie, the direct ancestors of cute little R2-D2 in Star Wars.

The three robots were actually amputees. Trumbull got the idea from watching Tod Browning’s Freaks (1932). He was impressed by one of the unfortunate characters who, though legless, could walk by using his hands and it occurred to Trumbull that by putting a small metal suit around such a person you could create a very effective robot. So, armed with this idea, he had three young writers – Michael Cimino and Deric Washburn, award-winning creators of The Deer Hunter (1978), and future television guru Steven Bochco – assist him in the construction of a screenplay around this one main gimmick, and the result was Silent Running, an illogical, sentimental mess. The special effects, however, are superb and the film improves once Freeman has begun his lone journey through the solar system towards deep space, with the relationship between him and the robots becoming amusing and even touching.

As eerily beautiful as the film’s special effects, Bruce Dern’s affecting central performance is magnificent. One of Hollywood’s leading loonies (along with Brad Dourif), Bruce has been on the edge of sanity in They Shoot Horses Don’t They? (1969), The Cowboys (1972), The King Of Marvin Gardens (1972), The Great Gatsby (1974), Family Plot (1976), Black Sunday (1977), The Driver (1978) and the Joe Dante films The ‘Burbs (1989), Matinee (1993), Small Soldiers (1998), and most recently The Hole (2009). Whether playing poker with the robots, viciously murdering his crew or just rapturously observing wildlife, Bruce nails every moment and rarely loses our sympathy. Never before or since have those haunted eyes been so perfectly employed – and to think, Larry Hagman almost scored the role, presumably on the strength of his portrayal of astronaut Major Nelson in I Dream Of Jeannie – whew!

Unfortunately, no amount of acting will help get over the absurdities abound in Silent Running. For instance, Freeman is totally mystified when all the plants start dying, until he realises that the lack of sunlight (the sun is now far away) might have something to do with it – a conclusion such an expert on plant life should have reached much sooner. Anyway, please join me next week when I have another opportunity to make your stomach turn and your flesh crawl with another lusting, slashing, ripping, flesh-hungry, blood-mad massacre from the back side of Hollywood for…Horror News! Toodles! 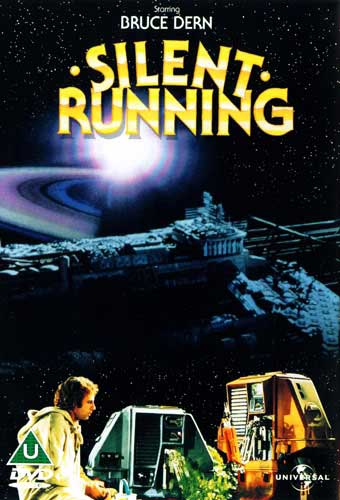