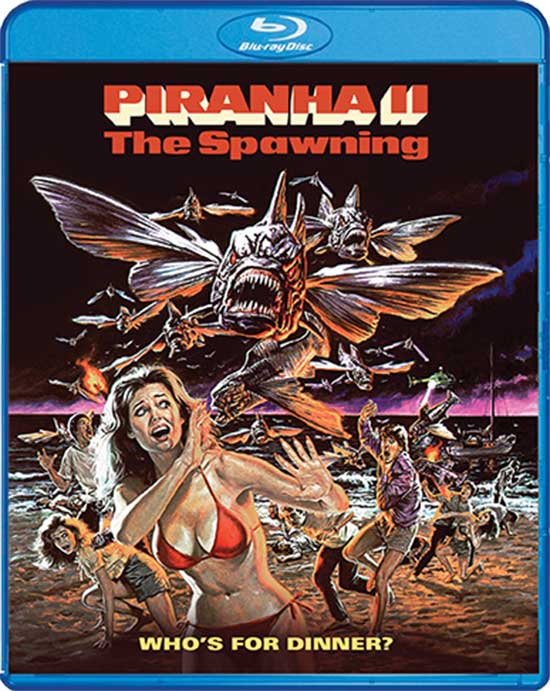 A scuba diving instructor, her biochemist boyfriend, and her police chief ex-husband try to link a series of bizarre deaths to a mutant strain of piranha fish whose lair is a sunken freighter ship off a Caribbean island resort.

Many films cropped up in the late 1970s to early ‘80s looking to capitalize on the popularity of Jaws, either aping it’s style or straight out stealing from it. One of the more shameless entries in Jaws ripoffs was the original Piranha, which at least went for a campy feel to help it stand apart. It obviously had some success, or I wouldn’t be reviewing today’s dive into low budget waters. So the question is whether or not the sequel manages to be just as fun to watch.

Piranha II takes place on a Caribbean island where a series of violent attacks have been taking place. A hotel employee is finding evidence that the attacks are being caused by mutant flying piranhas. After she finds the proof she needs to enlist the help of her estranged husband, the duo and their allies race against time before the flying fish decides to dine on most of the island’s populace. 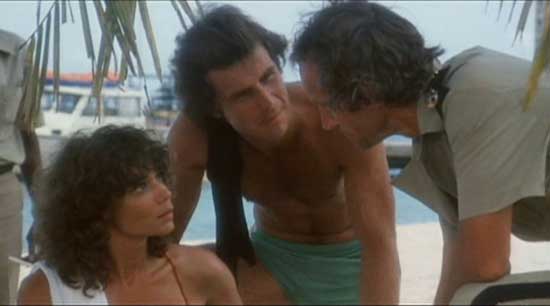 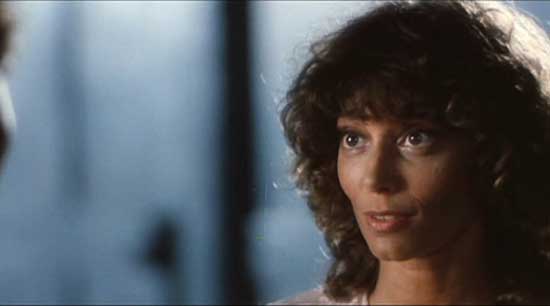 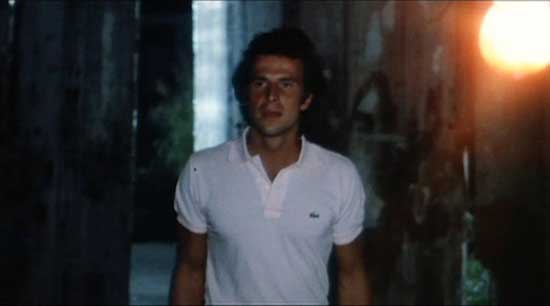 One thing for this flick’s main concept, it’s equally one of the most ridiculous and equally awesome ideas I’ve ever seen in a B-movie flick. A school of piranha, genetically engineered to be flying killing machines in an experiment funded by the U.S. government, get loose off the coast of an island and starts treating the tasty humans like lunch. Sure, they never quite explain how they manage to survive outside of the water for long periods of time, or why the government would think flying piranha would make an effective weapon. Strangely enough, the sheer craziness of the concept managed to work just enough that the logic gaps don’t distract too much, mainly because it’s too fun. Look, if you don’t find the idea of flying piranha as awesome as I do, we may have to have a long conversation about our relationship.

Piranha II was James Cameron’s first stint in the director’s chair. Considering he got his start working in FX, it shouldn’t be surprising that a lot of the special effects and makeup looked pretty good despite the limited budget. He knew how to get the most bang for his buck that he could, and it shows. For those interested in such things, Piranha II is a great way to see where James Cameron’s directing career got its start and get an idea how far he’s developed since then.

I was pleasantly surprised that we had a few decent actors in Piranha II. Our leads were pretty good for the most part, with the real jewel being Lance Henriksen. He’s awesome in this, which isn’t all that hard to believe since I’m hard pressed to think of any time he’s given a bad performance. An audience can always rely on him to give his best no matter the quality of the film he’s in, and things are no different here. His presence in a scene alone seemed to elevate the material. The other lead actors also provided some solid performances to help balance out the fact that a lot of the remaining cast was pretty bad. That’s to be expected with this kind of film, and at least no one was terrible enough to bring the whole production down. 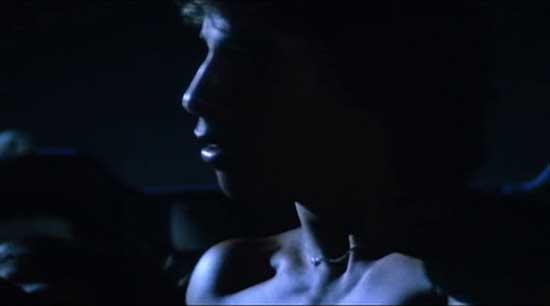 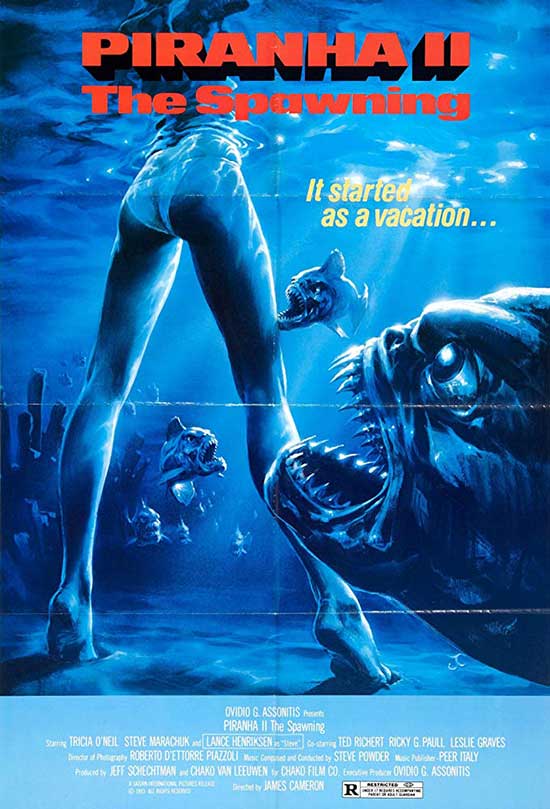 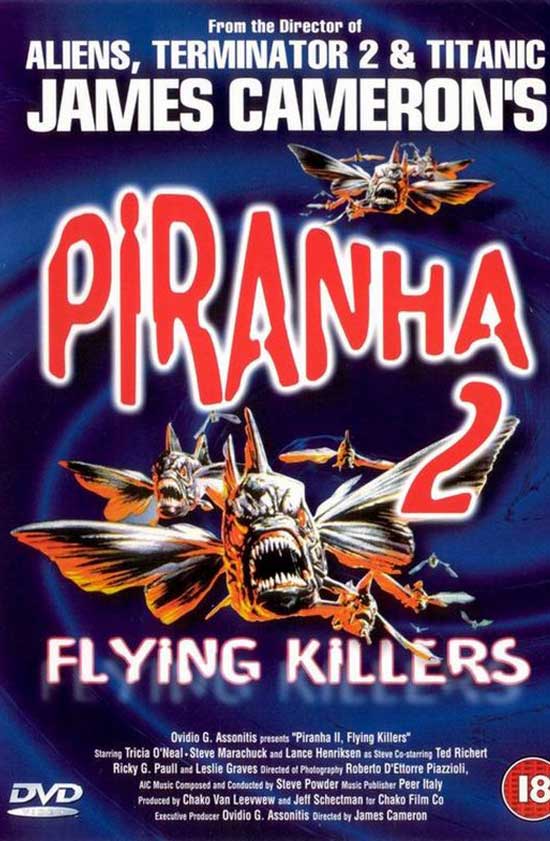 If you’re a fan of exploitation movies, you will get to see some nudity, violence, and gore, so you won’t be too disappointed there. One may argue that for a low budget ‘80s horror flick there wasn’t as much of those three elements as you might expect, but there was still enough to keep things interesting.

The film does rely too much on certain cliches that we’re used to in Jaws rip-offs. For example, you have the hero who believes that something in the water is endangering everyone, yet no one listens to them before it’s too late. You also have one of the people in charge insist on continuing the beach activities after people start dying because they don’t want to hurt their bottom line, which predictably leads to disaster. I could keep listing all the things that are part of the formula, but I’m sure you get the point. This reliance on that kind of structure does add a sense of “been there, done that”. While the idea of flying piranha is cool, I will also concede that it’s too silly for some to take seriously. However, I argue that that was the point. It was meant to be cheesy. 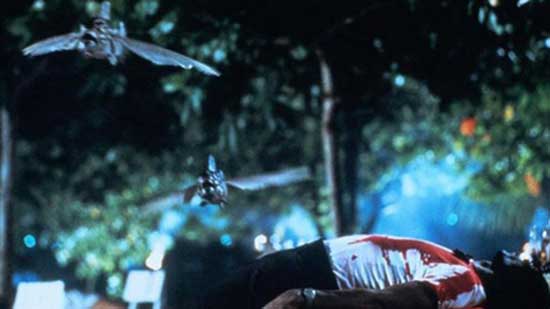 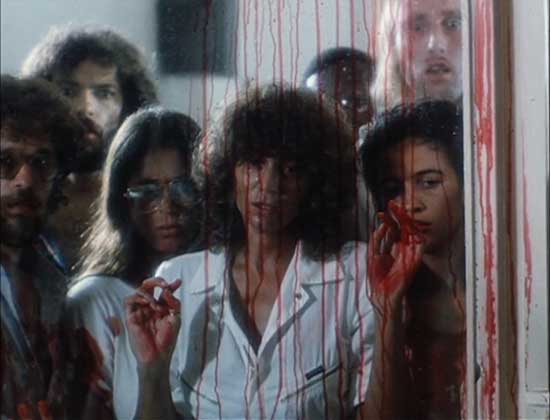 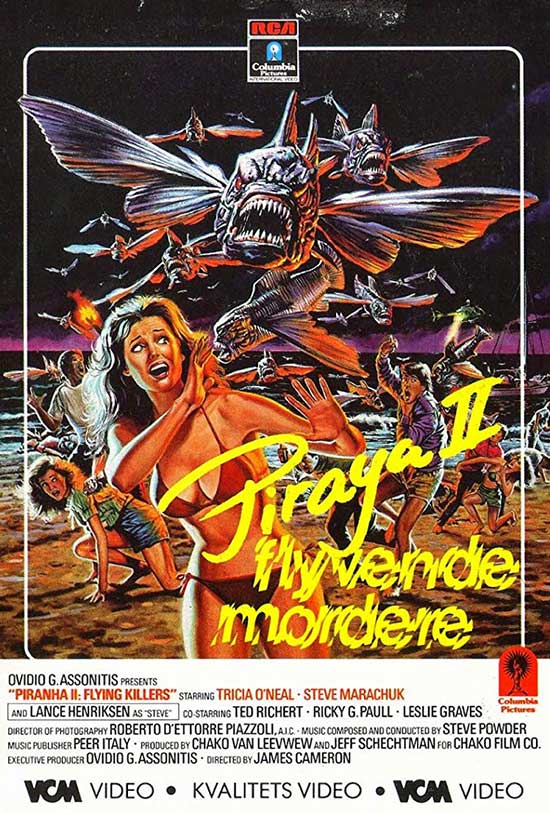 Piranha II is not a great film. It’s a low-budget sequel to a somewhat successful Jaws clone, so there are flaws. However, it manages to be fun enough that you should be able to look past the film’s weak points and be entertaining.

I mean seriously! Flying freaking piranha! What’s not to love?

Piranha Part Two: The Spawning (1981) is now available on bluray per Shout Factory